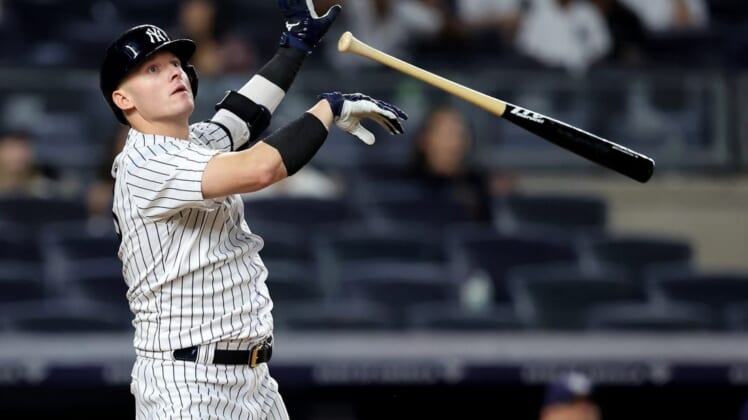 Josh Donaldson hit a game-ending grand slam in the 10th inning and the New York Yankees came back to beat the Tampa Bay Rays 8-7 Wednesday night to avoid a three-game sweep.

Donaldson won it when he lifted an 0-1 97 mph fastball from Jalen Beeks (2-2) to right field to complete New York’s second comeback of the night and 13th walk-off win of the year.

Donaldson’s dramatic homer gave the Yankees their third win in 14 games and pushed their AL East lead back to double digits. New York has led by double digits for all but two days since June 13.

The decisive rally occurred after Aroldis Chapman (2-3) allowed a two-strike, bases-clearing double to Francisco Mejia with two outs in the top of the 10th.

The Blue Jays scored six runs in the seventh to salvage the finale of a three-game series and finish a 2-4 homestand. Toronto’s Ross Stripling, back from the injured list, allowed no runs, one hit and no walks while striking out seven in 6 1/3 innings. He retired the first 18 batters he faced.

Baltimore’s Austin Voth allowed no runs, two hits and one walk with three strikeouts in six innings. The Orioles completed a 3-4 road trip.

Alejo Lopez had three of the six hits for the Reds, who snapped a two-game losing streak. Cincinnati’s Nick Lodolo tossed seven scoreless innings, his longest outing of the season. Alexis Diaz (4-1) earned the win with two scoreless innings in relief.

The Mariners improved to 4-2 on their nine-game trip, which concludes with three games at last-place Oakland starting Friday. George Kirby (5-3) got the victory, allowing three runs on six hits in 5 2/3 innings. The rookie walked one and struck out seven.

The Angels’ Shohei Ohtani, the reigning American League MVP, hit a two-run shot to center field in the bottom of the ninth inning. Ohtani, who also had a triple, went 4-for-5 with four RBIs.

Padres shortstop Ha-Seong Kim went 3-for-4 with four RBIs, including a three-run double in the ninth. San Diego’s Josh Bell, a key acquisition at the trade deadline, snapped an 0-for-26 drought with a ninth-inning double.

Jose Miranda homered and had two hits and six pitchers combined for a six-hitter as Minnesota completed a three-game sweep of Kansas City with a shutout victory in Minneapolis.

Nick Gordon added an RBI double and a highlight-reel catch for the Twins. Starter Tyler Mahle left after 2 1/3 hitless innings with what the team announced was right shoulder fatigue.

Emilio Pagan (4-6), the first of five Minnesota relievers, picked up the win allowing three hits over two innings. The Twins outscored Kansas City 17-2 over the three games and shut out the Royals over the final 26 innings.

Yan Gomes hit a tiebreaking single in the seventh inning against his former team and visiting Chicago beat Washington to win a three-game series.

Erich Uelman (1-1) got the victory and Rowan Wick pitched the ninth for his eighth save. P.J. Higgins homered and Franmil Reyes had two doubles for the Cubs. Chicago’s Drew Smyly allowed two runs on four hits in 5 1/3 innings.

Rookie outfielder Joey Meneses extended his hitting streak to 11 games for the Nationals, going 1-for-4 with a double and a run. He has hit safely in 12 of his 13 games since debuting earlier this month.

Alex Verdugo and Christian Arroyo were a combined 6-for-8 and starting pitcher Rich Hill didn’t allow a run after the first inning as visiting Boston beat Pittsburgh.

Verdugo went 3-for-3 with a double, an RBI, three runs and two walks. Arroyo finished 3-for-5, scored a run and drove in three more to lead the Red Sox to their third straight win and fifth in six games.

Hill (5-5) tossed five innings of two-run ball for his first victory since June 26. Bryan Reynolds went 2-for-4 with a two-run home run for the Pirates.

Oscar Gonzalez also knocked in two runs for the Guardians, who got two hits apiece from Gonzalez, Steven Kwan and Andres Gimenez. Bryan Shaw (6-2) retired the only batter he faced for the win.

Tony Gonsolin allowed just two hits over seven scoreless innings for his National League-best 15th win and Los Angeles held on for a victory at Milwaukee.

Austin Barnes and Max Muncy each had a solo homer for the Dodgers, who bounced back from a 5-4 loss in 11 innings on Tuesday. Los Angeles, 21-5 since the All-Star break, has not lost two straight since July 25-26.

The Brewers pulled within 2-1 in the eighth on Christian Yelich’s RBI single. Craig Kimbrel allowed a two-out single and a walk in the ninth but got Luis Urias on a fielder’s-choice bouncer for his 21st save.

The Mets totaled four homers and withstood a pair of late Atlanta comebacks to end the Braves’ eight-game winning streak and restore their lead in the National League East to 4 1/2 games. Marte and Francisco Lindor hit back-to-back homers in the first inning. Marte added a solo shot in the seventh.

Mets starter Max Scherzer (9-2) cruised until the seventh inning, retiring 13 in a row in one stretch, but was removed after loading the bases in the seventh. Reliever Adam Ottavino allowed a run to score on a fielder’s choice and surrendered a three-run homer to Robbie Grossman.

Nolan Gorman drove in three runs to lead St. Louis past visiting Colorado for its third victory in a row. The Cardinals have won 12 of their past 13 home games and 14 of 18 games overall. The Rockies have dropped four straight, including the first two contests in the current three-game series.

St. Louis’ Jordan Montgomery (6-3) allowed one run on six hits in 5 2/3 innings. He struck out eight batters and walked none while improving to 3-0 in three starts since arriving from the Yankees in an Aug. 2 trade. Brendan Donovan led St. Louis with three hits.

Langeliers connected on his first homer, and it came in his second big league game. The shot to right-center highlighted a four-run eighth inning that broke the game open. The A’s have now won back-to-back games.

Rangers left-hander Cole Ragans (0-2) was lifted after five innings. He surrendered three runs on four hits with one walk and three strikeouts.

Framber Valdez matched a franchise record with his 20th consecutive quality start and Chas McCormick had an RBI double to lift visiting Houston over Chicago.

Valdez (12-4) improved to 11-3 in his hot stretch after allowing two runs on seven hits while striking out six in seven innings. His 20 consecutive quality starts matched the streak of Mike Scott during the right-hander’s National League Cy Young Award-winning season in 1986.

Yoan Moncada had an RBI double, and Jose Abreu recorded his fifth straight multi-hit performance for the White Sox, who were unsuccessful in their bid to match a season-high, six-game winning streak.

The Diamondbacks’ Stone Garrett, making his major league debut, hit two doubles, including one in the eighth inning that set up McCarthy’s decisive hit. Noe Ramirez (4-3) got the win in relief, and Mark Melancon notched his 17th save.