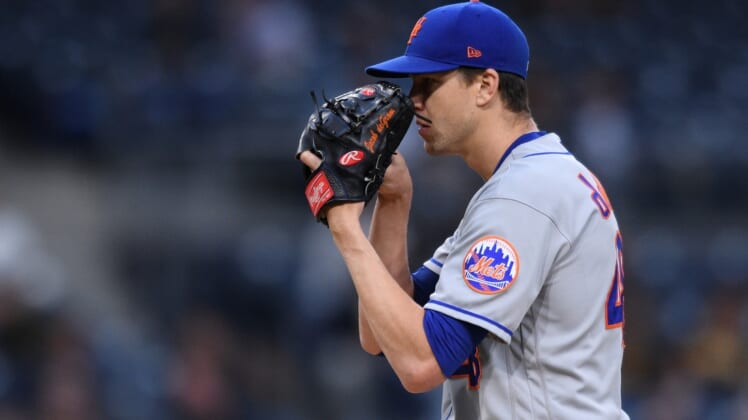 Peraza and Lindor connected off Padres starter Joe Musgrove (4-5) an inning after deGrom struck out Wil Myers and rookie Tucupita Marcano to pitch out of a bases-loaded, one-out jam.

Musgrove had just struck out deGrom to open the fifth and was ahead of Peraza 1-and-2 when the infielder hit a hanging slider into the left field seats to end the scoreless tie. Lindor then hit his fifth homer, pulling a slider into the right field seats.

Skubal (3-7) allowed one run four hits and won his second straight start six days after pitching six scoreless innings against the New York Yankees. It was the first career double-digit strikeout game for Skubal, who picked up his fourth career victory.

Skubal pitched at least five innings for the sixth straight start since May 7. He has 50 strikeouts with 12 walks in that span. His 11 strikeouts are tied for the most in a game by a Tigers rookie since 1974.

The Red Sox have won the first two games of the three-game set and six of their last nine. The Yankees have lost three straight and nine of 12. Winning pitcher Garrett Whitlock (1-1) tossed 1 2/3 scoreless innings, and Matt Barnes got the last out for his 14th save.

Rafael Devers had a two-run single to put the Red Sox on the board in the sixth, and Bobby Dalbec slammed a two-run homer in the eighth. Gleyber Torres homered and had three RBIs for the Yankees. Reliever Chad Green took the loss, allowing four runs on four hits in just two-thirds of an inning.

Eugenio Suarez hit a two-run homer in the sixth inning to lift visiting Cincinnati to a victory over St. Louis.

Reds starting pitcher Tyler Mahle (5-2) allowed two runs on five hits and struck out eight over seven innings. The Reds have won three in a row and five of their last six games.

The Cardinals have lost four straight games and six of their last seven. St. Louis’ injury woes continued, too, as catcher Yadier Molina sustained a left knee contusion on a foul tip.

The Mariners scored five runs off Cobb in the fourth inning, four of them on Jake Fraley’s grand slam. But after the slam, Cobb (4-2) retired the next 11 hitters to get through seven innings. Seattle reliever Drew Steckenrider (2-2) got the loss.

The Angels put the game away with a five-run eighth inning. Seven Angels hitters had two hits apiece in the game, including Ohtani with a home run and double. Five Angels each drove in two runs, and the Angels finished with 15 hits.

Guerrero had three hits to help Toronto gain a split of the first two contests of the three-game series.

Carlos Correa had three hits for the Astros, who were playing the second game of a nine-game road trip.

Harold Ramirez had three hits, including one of Cleveland’s three home runs, in a win over host Baltimore.

Cedric Mullins went 5-for-5 with a pair of solo homers for the Orioles, who had won three straight. Ryan Mountcastle also homered, giving him home runs in four of his past five games. Baltimore starter John Means (4-2) departed in the first inning with left shoulder fatigue.

Andrew McCutchen belted a three-run homer in the fourth inning to fuel host Philadelphia over Washington.

Ranger Suarez (1-0) earned the victory with three shutout innings in relief of Spencer Howard. Suarez did not allow a hit and struck out three after Howard gave up one run and one hit in 2 1/3 innings.

The Phillies’ lineup got a boost with the return of Bryce Harper (wrist) from the injured list, and he helped by going 1-for-3 with an RBI single.

Austin Meadows produced a two-run single, Margot clubbed his fifth long ball and Yandy Diaz, Taylor Walls and Randy Arozarena each had singles for the Rays, who are 18-4 in their past 22 games and evened their weekend series with Texas at 1-1.

Charlie Culberson stroked his first triple, and left-hander Kolby Allard (1-2) allowed two runs and three hits over five innings in his second start for Texas. He struck out six and walked one.

Brandon Crawford had an RBI double among his two hits to help San Francisco win its third straight game, all against the Giants to start the four-game series. Chadwick Tromp and LaMonte Wade Jr. each had an RBI single to propel the Giants to their ninth victory in their last 11 games overall.

Patrick Wisdom launched a two-run homer in the second inning for the Cubs, who won 14 of their previous 17 games before entering this series. Joc Pederson exited the game prior to the Cubs taking the field in the fifth inning with lower back tightness.

Against reliever Adam Cimber (1-2), Adam Frazier started at second and moved to third on Ke’Bryan Hayes’ fly to center. Bryan Reynolds was intentionally walked before Stallings singled to center.

It was Stallings’ fifth career walk-off hit and his second game-winning hit of the series.

Tied at 5, Yelich went to the opposite field over the left-field fence off Joakim Soria (0-2) to put Milwaukee up by one. Narvaez followed with his third hit of the game, a homer into the right field seats for the final scoring margin.

Willy Adames also clubbed a two-run homer for the Brewers, who have homered nine times while winning the first three of this four-game set.

It was Sano’s second home run in two days. Saturday’s came against Mike Minor (4-3), who allowed five runs on seven hits in seven innings. Jose Berrios (6-2) picked up the win despite surrendering four runs on six hits in six innings, walking two and striking out four.

The Royals had Jarrod Dyson on third base with one out in the ninth inning, but Michael A. Taylor lined into a double play. The loss snapped Kansas City’s five-game winning streak.

Ozzie Albies and Dansby Swanson each had a two-run double to spark a five-run rally and help Atlanta beat Clayton Kershaw for the first time ever in a win over visiting Los Angeles.

It was Kershaw’s first loss to the Braves in 12 career starts. Kershaw pitched six innings and allowed five runs on eight hits, one walk and nine strikeouts. He passed Atlanta Hall of Famer Tom Glavine and moved to 27th on the career strikeout list with 2,612.

The homers by Olson, a two-run shot in the first inning, and Pinder, a solo blast in the third, came as part of a five-run, 10-hit Oakland assault on Rockies starter Kyle Freeland (0-1), who worked five innings and left trailing 5-1.

Irvin (4-7) benefited from the early support, throwing all 85 of his pitches with a lead. He allowed six hits and one walk in his six innings, with five strikeouts.