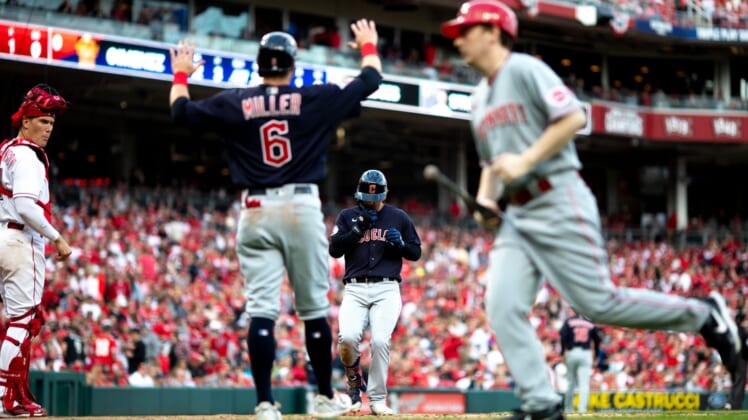 Cleveland Guardians ace Shane Bieber teased fans with a possible no-hitter, but it was an improbable two-run homer by Andres Gimenez in the ninth inning that was the difference in a 10-5 victory over host Cincinnati on Tuesday in the Reds’ 146th home opener.

Gimenez, who batted .218 last season for Cleveland, blasted a home run off reliever Hunter Strickland (0-1) in the ninth inning to break a 4-4 tie.

Bieber took a no-hitter into the sixth but wound up allowing three runs on two hits and two walks in 5 1/3 innings. Cincinnati got a two-run homer from Tyler Naquin, while starter Tyler Mahle yielded four runs (one earned) in four innings.

Giants coach Alyssa Nakken became the first woman to coach on a Major League Baseball field in a regular-season game when she replaced ejected first-base coach Antoan Richardson in the third inning.

The Giants’ Wilmer Flores went 3-for-5 with a homer, three runs and two RBIs. Thairo Estrada and Belt each had two hits and scored twice; Estrada also drove in three.

Enrique Hernandez had two doubles, scored two runs and drove in another for the Red Sox, who rallied from a 3-0 deficit after dropping the series opener 3-1 on Monday. Red Sox starter Rich Hill, 42, allowed three runs on five hits in 4 1/3 innings to begin his third stint with the franchise.

Javier Baez had an RBI double for Detroit and Spencer Torkelson delivered his first major league hit in the third inning. The Tigers were limited to five hits.

Manuel Margot’s single drove home Wander Franco in the bottom of the 10th inning to give Tampa Bay a walk-off win over Oakland in St. Petersburg, Fla.

Franco, who has 11 hits through the first five games, was on base after driving in Brandon Lowe with a double off Lou Trivino (0-1). Ryan Thompson (1-0) got the win despite giving up Billy McKinney’s RBI single in the top of the 10th.

Brandon Lowe, Ji-Man Choi and Brett Phillips homered for the Rays, while Jed Lowrie went deep for the A’s.

Tylor Megill earned the win with 5 1/3 innings of three-hit ball and combined with three relievers on a shutout of host Philadelphia.

Megill (2-0), who was ticketed for the minor leagues before Jacob deGrom sustained a shoulder injury that forced Megill into making an Opening Day start last Thursday, has thrown 10 1/3 scoreless innings this season with no walks and 11 strikeouts, including five Tuesday night.

Brandon Nimmo’s fifth-inning homer and Francisco Lindor’s eighth-inning single accounted for the game’s only two runs. Edwin Diaz pitched out of a jam in the ninth inning for his first save. Phillies starter Zack Wheeler (0-1) yielded one run in 4 2/3 innings.

Luis Robert hit a go-ahead home run off rookie Matt Brash in the sixth inning and Chicago celebrated its home opener with a win over Seattle.

Reynaldo Lopez (1-0) pitched 1 2/3 innings for the victory. Liam Hendriks allowed a run in the ninth before striking out Mitch Haniger with two runners on for his first save. Chicago has won three straight since an Opening Day loss to the Detroit Tigers.

Seattle lost its third straight despite an impressive major league debut by Brash (0-1), who allowed two runs on four hits over 5 1/3 innings. He walked one and struck out six.

Suzuki continued his strong start to his first season in the major leagues after starring in Japan. He was 2-for-4, making him 5-for-12 with three homers and eight RBIs through four games.

Chicago left-hander Drew Smyly (1-0), in his Cubs debut, pitched five scoreless innings and gave up three hits, with one strikeout and no walks. Bryan Reynolds homered in the eighth for the Pirates.

Tyler Wade scored from third base on Max Stassi’s infield grounder in the bottom of the ninth inning, lifting Los Angeles to a win over Miami in Anaheim, Calif.

The Angels’ Anthony Rendon (sixth inning) and the Marlins’ Jazz Chisholm Jr. (seventh inning) matched each other with two-run homers to make the score 3-3, setting up the hosts’ opportunity in the ninth inning.

Raisel Iglesias (1-0) got the victory with a scoreless ninth as Los Angeles swept the two-game interleague series.

Elder, Atlanta’s fifth-round draft pick in 2020, allowed three runs on six hits and struck out four. The right-hander (1-0) gave up a run in the first inning and then retired 12 straight batters.

Elder grew tired in the sixth inning and allowed back-to-back homers to Juan Soto and Josh Bell before being removed. Jackson Stephens, recalled by the Braves on Tuesday, pitched the final three innings. He had not pitched in the major leagues in four years and earned his first career save.

Albert Pujols went 3-for-4 with a homer, the 680th of his career, and scored two runs as the Cardinals won for the third time in four games. St. Louis starting pitcher Dakota Hudson lasted just four innings while allowing three runs on five hits.

Salvador Perez hit two solo homers for the Royals and Michael A. Taylor hit a two-run shot. Starting pitcher Daniel Lynch (0-1) struck out seven batters in five innings, but he allowed six runs on nine hits, including three home runs, and a walk.

Jhoulys Chacin (2-0) tossed 2 2/3 innings of scoreless relief for Colorado’s fourth win in a row. Daniel Bard pitched a scoreless ninth inning for his second save.

Texas had four hits — two each by Mitch Garver and Andy Ibanez — and was swept in its home-opening series. Rangers starter Martin Perez (0-1) allowed three runs on seven hits in four-plus innings. He walked one and struck out two.

DJ LeMahieu had two hits and also scored on a throwing error as the Yankees beat the Blue Jays at home for just the third time in 12 meetings since the start of last season. Cortes went 4 1/3 innings and allowed three hits, struck out five and walked none.

Toronto’s Yusei Kikuchi (0-1) allowed three runs — two earned — on five hits in 3 1/3 innings. He struck out two, walked two and threw 84 pitches in his debut for the Blue Jays.

Andrew McCutchen drove in three runs on two hits to fuel visiting Milwaukee to a victory over Baltimore.

McCutchen ripped a two-run double down the left-field line in the first inning and added a go-ahead single in the seventh. Hunter Renfroe contributed an RBI double and Willy Adames had two hits and three runs for the Brewers. Hoby Milner (1-0) retired the lone batter he faced to record his first decision in 96 career appearances.

Michael Brantley’s two-out single in the top of the ninth inning drove home Jose Siri with the deciding run and Ryan Pressly worked out of a jam for his third save as Houston defeated Arizona in the first game of a two-game interleague series in Phoenix.

Brantley’s hit, his third of the game, came off Mark Melancon after a double by Siri and a walk to Jose Altuve, all with two outs. Melancon (0-1) was the sixth Arizona pitcher.

Houston has captured four of its first five games. It’s an impressive start to its longest road trip of the season — nine contests in 11 days in Anaheim, Phoenix and, beginning Friday, Seattle. The Diamondbacks have dropped four of their first five and have scored just 12 runs.

Will Smith and Gavin Lux drove in two runs apiece and Los Angeles relied on a six-run eighth inning to pull away in Minneapolis in a game delayed by rain for 88 minutes in the eighth.

Trea Turner and Justin Turner added one RBI apiece for the Dodgers, who snapped a two-game skid. Right-hander Daniel Hudson (1-0) earned the win by pitching one scoreless inning. Hudson was one of five relievers who followed starter Andrew Heaney.

Max Kepler went 2-for-3 with a double and an RBI for Minnesota. Right-hander Emilio Pagan (0-1) took the loss.