LaMonte Wade Jr. hit a go-ahead single in the 10th inning and Evan Longoria added a two-run double as the visiting San Francisco Giants earned an 8-5 victory over the Los Angeles Dodgers on Friday.

It was the first time the Giants defeated their National League West rival in five games this season.

Wade, who was recalled Thursday, reached base four times in his return to the major leagues on a hit, two walks and a hit by pitch. His go-ahead single came off Dodgers right-hander Kenley Jansen (0-2), who had not given up a run over his previous 11 outings.

Buster Posey hit a three-run home run in the eighth inning off Los Angeles right-hander Blake Treinen to break a 2-all tie. It was his 10th of the season but just his second hit in four games against the Dodgers.

Austin Barnes hit a three-run home run in the ninth inning off Giants closer Tyler Rogers to tie the game 5-all with the Dodgers down to their last out. One batter later, Albert Pujols appeared to give the Dodgers a victory with a deep drive to left, but Giants left fielder Mike Tauchman reached over the wall to make the catch and sent the game into extra innings.

David Bote’s home run to left was the difference as host Chicago beat Cincinnati on a cold and blustery afternoon.

The Cubs have won five consecutive games and seven of the past eight. They play host to the Reds again Saturday afternoon at Wrigley Field in the second game of a three-game series.

Bote’s home run in the fifth spoiled what otherwise was a terrific major league debut by Cincinnati righty Vladimir Gutierrez.

J.D. Martinez drove in a pair of runs for the Red Sox. Martin Perez (3-2) allowed two runs on five hits with no walks and four strikeouts over five innings.

Jorge Alfaro hit a two-run home run for the Marlins. Rookie Cody Poteet (2-1) surrendered a season-worst five runs on four hits and two walks while striking out six in 4 1/3 innings.

Joe Panik clubbed a two-run homer for one of his four hits and Hyun Jin Ryu won his fourth straight decision, as Toronto opened this three-game road set with a victory over Cleveland in a game called in the bottom of the seventh inning due to rain.

Eddie Rosario extended his hitting streak to eight games for Cleveland, which yielded its most runs of the season and couldn’t get three full innings from starter Eli Morgan (0-1) in his major league debut.

Robbie Grossman hit a two-out, two-run homer in the bottom of the 10th to give host Detroit a win over New York.

With Eric Haase on third base, Grossman clubbed a 3-2 fastball off Justin Wilson (1-1) over the left-field wall. It was Grossman’s sixth homer this season.

Grossman scored two runs, while Jeimer Candelario had three hits and drove in a run.

Visiting San Diego scored seven times in the top of the 11th to defeat Houston.

The Padres had run-scoring singles by Ha-Seong-Kim, Tommy Pham and Jake Cronenworth, a sacrifice fly by Fernando Tatis Jr., an RBI double by Wil Myers, and a two-run single by Jurickson Profar, who scored the inning’s first run as the runner on second.

Mark Melancon, who suffered his first blown save in the 10th, was credited with his first win. Brooks Raley (2-3) suffered the loss, giving up three straight hits to open the 11th. The rest of the Padres’ damage in the 11th was against Brandon Bielak.

Oakland took advantage of two walks and an error to knock out Shohei Ohtani in the seventh inning, using a two-run uprising to beat visiting Los Angeles.

Both of the runs were charged to Ohtani, giving him three earned runs allowed in six-plus innings. He served up just three hits and four walks, striking out five. 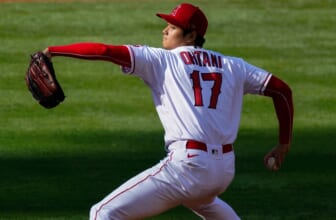 Tyler O’Neill hit a two-run homer and Nolan Arenado connected on a solo shot to help St. Louis record a victory over Arizona in Phoenix.

The struggling Diamondbacks have lost 12 straight games, two shy of the franchise record set in 2004. Josh Reddick had three hits for Arizona, which has dropped 15 of its last 16 games and 21 of 24.

Their output helped the Royals score more runs Friday than they did (five) in the three-game series against Tampa Bay. Soler was 0-for-21 coming into the game, and he went 2-for-4 with a run scored. Dozier returned from the 10-day injured list mired in an 0-for-31 slump, and he went 1-for-3 with a walk and two runs scored.

Randy Dobnak (1-4) took the loss. He gave up six runs on nine hits in six-plus innings.

It was the 10th consecutive road loss for the Rangers. It was also their 10th straight defeat at T-Mobile Park, with their last win at Seattle coming on July 23, 2019.

Mariners left-hander Justus Sheffield (4-4) went five innings for the victory. He allowed two runs on six hits, with two walks and one strikeout.