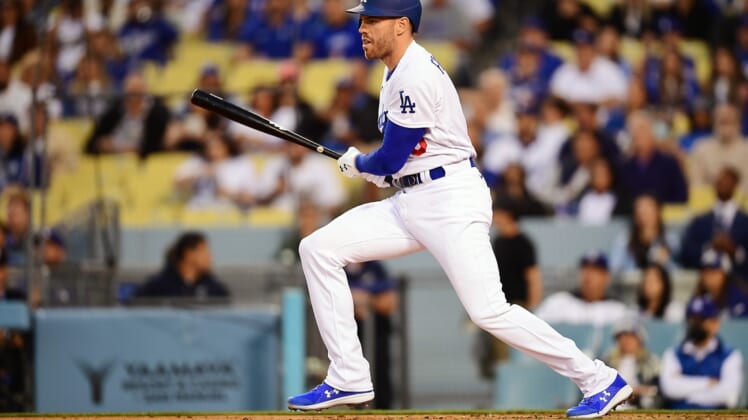 Freddie Freeman had two hits and scored a pair of runs, including the go-ahead score in the eighth inning, to help the Los Angeles Dodgers to a 9-3 victory over the visiting Cincinnati Reds on Thursday.

Playing in his first regular-season game at Dodger Stadium since signing a free agent deal with the club in the offseason, Freeman doubled to left-center to lead off the eighth inning. He scored on a single to right by Trea Turner off Reds right-hander Tony Santillan to snap a 3-3 tie.

Aristides Aquino and Brandon Drury hit home runs for the Reds, and Jonathan India had two hits before leaving in the fifth inning with a right hamstring injury. Cincinnati lost for the fifth time in six games since defeating the World Series champion Atlanta Braves on Opening Day.

Manny Machado tied his career high with five hits, capped by a two-run homer, as San Diego opened its home season with a rout of defending World Series champion Atlanta.

Machado went 5-for-6 with four runs and two stolen bases. He flied out to center in the eighth while attempting to tie the Padres record of six hits in a game.

Joe Musgrove (1-0) worked 6 2/3 shutout innings, allowing four hits with no walks and six strikeouts. Ozzie Albies homered leading off the ninth off Pedro Avila for the Braves’ only run.

Brandon Woodruff allowed three hits over five scoreless innings and Omar Narvaez homered and doubled in a run to pace Milwaukee to a home-opening victory over St. Louis.

The Brewers reached Adam Wainwright (1-1) for four runs over the first three innings. Wainwright, who pitched six scoreless innings in his first start of the year, allowed four earned runs on eight hits in 4 1/3 innings, striking out seven and walking two.

Garrett Cooper slugged a solo homer in the fourth and had a fielding gem in the ninth, and Sandy Alcantara (1-0) was charged with two runs in 6 1/3 innings as the Marlins snapped a three-game losing streak. Alcantara worked around seven hits — including a pair of doubles — and one walk.

Jonah Heim, a backup catcher batting in the No. 9 spot, had three hits and a career-high five RBIs to propel Texas past Los Angeles in Arlington, Texas.

One of those hits was a grand slam off Angels starter Shohei Ohtani, who gave up six runs in 3 2/3 innings. Heim also had an RBI single off Ohtani (0-2), who allowed six hits and two walks and now has a 7.56 ERA. Corey Seager had two hits, including his first home run as a Ranger, and three RBIs.

Severino (1-0) allowed two hits, walked two and struck out six for his first win as a starter since beating Toronto on Sept. 22, 2019. Jose Trevino had a pair of run-scoring hits, and Isiah Kiner-Falefa had three hits and two runs.

Guerrero struck out four times for the first time in his career, a night after homering three times and getting his right hand stepped on by Aaron Hicks in the second inning.

Daniel Vogelbach went 4-for-6 with a home run and two RBIs as Pittsburgh won the opener of a four-game series against visiting Washington.

Bryan Reynolds added a two-run homer for Pittsburgh, which battled back from an early 3-0 deficit. Cole Tucker had three of the Pirates’ 14 hits and Kevin Newman hit a two-run double. Rookie reliever Roansy Contreras (1-0) struck out five over three scoreless innings for the win.

Yadiel Hernandez went 3-for-4 and drove in two runs for Washington. Keibert Ruiz had two hits and an RBI, and Josh Bell scored twice.

Oakland used a strong performance by starter Cole Irvin and a fluke play on offense on its way to a victory over Tampa Bay at St. Petersburg, Fla.

With Kevin Smith and Elvis Andrus on base for the Athletics in the second inning, Cristian Pache hit a ball through the infield and into center field. As Randy Arozarena tried to field the ball, he kicked it toward the wall. Smith and Andrus scored with ease and Pache was able to circle the bases.

Irvin (1-1) allowed three runs on five hits in 6 1/3 innings. He exited the game in the seventh inning after Brandon Lowe hit a two-run home run.

Miguel Cabrera had three hits and scored a run as Detroit defeated host Kansas City in the first game of a four-game series.

Keegan Thompson (1-0) tossed 3 1/3 innings of scoreless relief and Mychal Givens picked up his first save for the Cubs.

Kris Bryant, C.J. Cron, Yonathan Daza and Connor Joe had two hits each for the Rockies.

The Mariners ended their four-game skid and Chicago’s four-game winning streak with a power-packed attack after having hit just five homers in their first six games.

Seattle never trailed, although the White Sox threatened to draw even in the fifth when an error by Raleigh, the catcher, and two singles made it 2-1 and put the potential tying run in scoring position. Jake Burger collected the RBI. But Gilbert (1-0) escaped further damage by striking out Luis Robert.