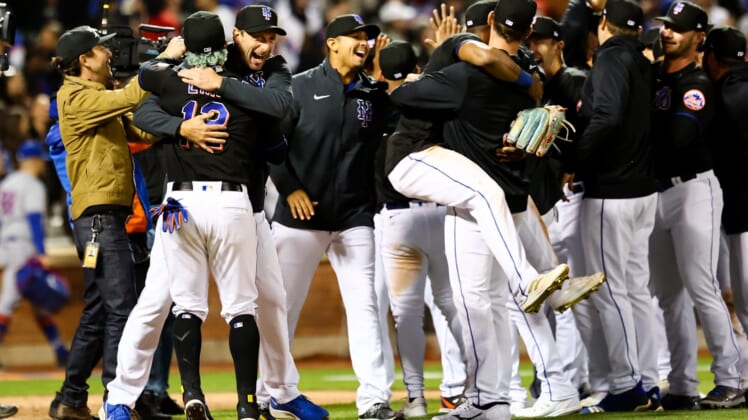 Tylor Megill and four relievers combined on the second no-hitter in team history as the host New York Mets beat the Philadelphia Phillies 3-0 on Friday night.

Johan Santana threw the Mets’ only previous no-hitter on June 1, 2012, when he struck out eight in an 8-0 win over the St. Louis Cardinals.

The Mets threw 159 pitches — the most ever thrown in a nine-inning no-hitter — while striking out 12 and walking six. It was the first no-hitter of this season in the majors.

Megill threw 88 pitches in five innings. He issued two of his three walks to Kyle Schwarber and struck out five but was pulled due to several long counts.

Drew Smith, Joely Rodriguez, Seth Lugo and Edwin Diaz completed the no-hitter, Diaz striking out Bryce Harper, Nick Castellanos and J.T. Realmuto in the ninth for his fourth save in five chances to complete the 17th combined no-hitter in major league history.

Vladimir Guerrero Jr. hit his sixth homer of the season, a three-run shot, for Toronto. Matt Chapman also homered and drove in two runs, and Raimel Tapia had four hits. Reliever Trent Thornton (0-2) took the loss. He allowed one run on two hits in 1 2/3 innings.

Jose Ramirez added three RBIs on a solo shot and a two-run double while reaching base four times and scoring three runs. Ramirez, who played in his 1,000th game with the franchise, has a major-league-best 28 RBIs. Gimenez and Myles Straw each had three hits for the Guardians.

Sheldon Neuse had three hits and three RBIs and Sean Murphy smacked a three-run homer for the A’s, who have lost four of their past six games.

New York hit four home runs, including a three-run blast by Aaron Judge to break open a close game in the seventh, as the Yankees defeated host Kansas City in a game shortened to eight innings by rain.

The Yankees, who lead the majors with 29 home runs, extended their winning streak to seven games. Nestor Cortes (1-0) picked up the win. He allowed two runs (one earned) on eight hits in five innings.

Arizona left-hander Madison Bumgarner allowed one run in five innings and Daulton Varsho had two hits and an RBI in a win over host St. Louis.

Bumgarner (1-1) settled down after giving up a home run to Paul Goldschmidt on a 12-pitch at-bat with one out in the first inning. Bumgarner allowed three hits with two strikeouts and a walk. He has a 1.17 ERA through five starts this season.

The Diamondbacks took a 2-1 lead in the third inning against 17-year veteran Adam Wainwright (2-3), who allowed three runs and four hits in six innings with five walks and four strikeouts for the Cardinals.

The Brewers never trailed en route to their fourth straight win, with Jace Peterson going deep in a three-run second and Andrew McCutchen hitting his second in two days in the third. Christian Yelich and Willy Adames also homered for Milwaukee.

Taylor Ward homered on the second pitch of the game and finished with three hits, Shohei Ohtani also homered, and seven Los Angeles pitchers combined on a three-hitter in Chicago.

Los Angeles right-hander Noah Syndergaard was scratched from his scheduled start due to an undisclosed illness, prompting manager Joe Maddon to open the game with reliever Jimmy Herget, who allowed one run and one hit in three innings with two strikeouts.

Austin Warren (2-0) earned the victory with two innings of perfect relief. Raisel Iglesias entered with two on and one out in the ninth to pick up his sixth save, working around a walk that loaded the bases to retire Luis Robert on a flyout to end the game.

Corey Kluber (1-1) gave up one run and one hit across six innings for his first victory as a member of the Rays, who’ve won three games in a row and five of their last six. Kluber struck out six and didn’t walk a batter.

Twins starter Dylan Bundy (3-1) had allowed a total of one earned run in his first three games. He lasted six innings and was charged with six earned runs and seven hits despite striking out seven. Carlos Correa had two of Minnesota’s three hits and drove in the Twins’ run.

Soler’s homer was a monster blast, measured at 468 feet, and Miami’s Jesus Sanchez added a two-run single and a diving catch in center field. Elieser Hernandez (2-1) earned the win, allowing five hits, one walk and three runs in five innings.

The win stretched San Diego’s winning streak to four. Darvish (2-1) gave up three runs on eight hits and a walk with five strikeouts in six innings to get the win. Taylor Rogers entered with two on and one out in the ninth to get his eighth save.

Baltimore was limited to three hits before Ryan Mountcastle homered off Hansel Robles to lead off the ninth inning. Matt Strahm, who replaced Robles with two outs and a runner at second, walked Anthony Santander before striking out pinch hitter Chris Owings for his first career save.

Rich Hill yielded one hit over four-plus scoreless innings for Boston, which won for just the second time in its last seven games. Tanner Houck (2-1) earned the victory after allowing two hits over three scoreless frames.

William Contreras hit two of Atlanta’s four home runs, the first multi-homer game of his career, in the win over Texas in Arlington, Texas.

Garrett Richards (0-1) opened the game for Texas and allowed two runs in one inning before giving way to Spencer Howard, who gave up one run on two hits, two walks and three strikeouts in 1 2/3 innings. Garcia and Corey Seager blasted home runs for the Rangers.

Ryan McMahon blasted a three-run homer and Antonio Senzatela allowed just one run in 6 1/3 innings to power Colorado to a victory over visiting Cincinnati in Denver.

McMahon went 1-for-4 with a walk while Senzatela (2-1) allowed the one earned run on seven hits with two walks and a strikeout.

The Rockies ended a four-game losing streak, while the Reds lost for the 17th time in their first 20 games.