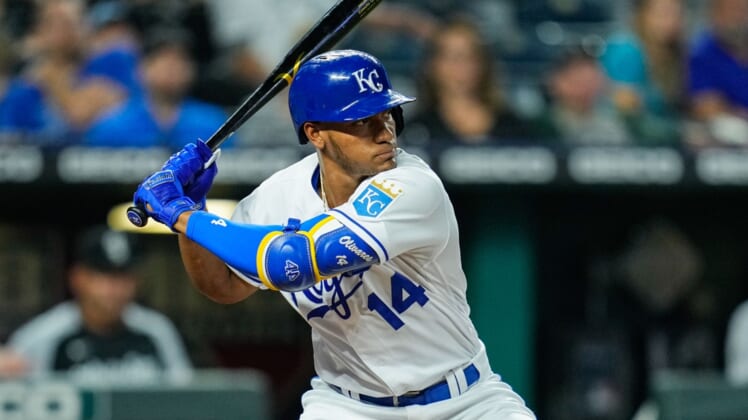 Edward Olivares hit a walk-off double as the Kansas City Royals broke a tie in the bottom of the ninth inning to defeat the Arizona Diamondbacks 11-10 in Surprise, Ariz.

The Royals scored six runs in the last three innings to rally past the Diamondbacks, who had scored five runs in the third inning, capped by a two-run blast from Cooper Hummel.

Jace Vines got the victory for the Royals, allowing one hit with one strikeout in one inning pitched. Blake Workman took the loss, giving up two hits and the winning run in two-thirds of an inning.

Christian Arroyo and Xander Bogaerts each doubled in a run as Boston scored three runs in the third inning to rally past Baltimore in Fort Myers, Fla.

Darren Baker’s sacrifice fly scored Andrew Young in the top of the eighth inning to lift Washington past Houston in Palm Beach, Fla.

Atlanta scored five runs in the bottom of the fifth inning to defeat Philadelphia in North Port, Fla.

Oswaldo Cabrera blasted a grand slam in the sixth inning to put New York ahead 7-4, but Detroit scored four runs in the top of the ninth inning to rally past the Yankees in Tampa, Fla.

Alejandro Kirk went 2-for-3 and drove in two runs as Toronto blasted Pittsburgh in Dunedin, Fla.

St. Louis got off to a fast start when Dylan Carlson belted a three-run homer in the top of the first as the Cardinals topped New York in Port St. Lucie, Fla.

Los Angeles scored twice in the second inning and Chicago evened up the game with a pair in the sixth and the teams finished in a tie in Phoenix, Ariz.

Christian Lopes belted a grand slam for Oakland in the bottom of the seventh and Cleveland’s Oscar Gonzalez doubled in two runs to tie up the game in the top of the ninth in Mesa, Ariz.

Chicago ran out to a 3-0 lead and then hung on to defeat Colorado in Scottsdale, Ariz.

Keston Hiura, Jace Peterson and Mike Brosseau each homered as Milwaukee took an early 6-0 lead in a victory over San Diego in Phoenix, Ariz.