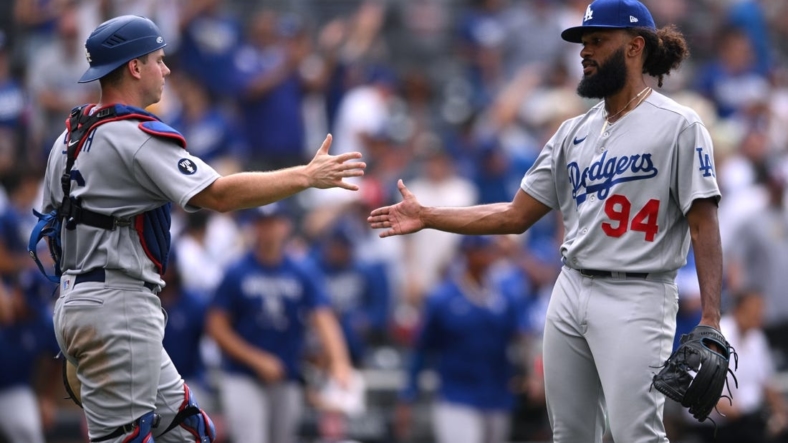 Justin Turner hit a pair of home runs, including a seventh-inning grand slam, and Max Muncy broke a 2-2 tie with a two-run single in the sixth inning Sunday afternoon as the visiting Los Angeles Dodgers routed the San Diego Padres 11-2 to clinch a National League playoff spot for the 10th straight season.

The loss reduced the Padres’ edge over the Milwaukee Brewers to two games in the race for the third NL wild-card berth.

Turner and Chris Taylor each hit a solo homer in the fifth to erase a 2-0 Padres lead. Jake Cronenworth homered for San Diego.

Pujols hit his 18th home run of the season to move into fourth place alone on baseball’s all-time homer list, passing Alex Rodriguez. An out later, Tyler O’Neill hit his 14th homer. St. Louis starter Jose Quintana, making his first start against his former team since he was traded last month, gave up one run and four hits in 5 2/3 innings, with four strikeouts and one walk.

Rich Hill’s five scoreless innings allowed an early run to stand up in a win for visiting Boston over Baltimore.

Xander Bogaerts drove in Tommy Pham with Boston’s only run on a sacrifice fly in the first inning. The top four hitters in the Red Sox lineup had one hit apiece.

Hill (7-6) struck out seven across five innings of two-hit, shutout ball for Boston, which won back-to-back games to conclude the three-game series.

Rowdy Tellez drove in four runs with two homers and a double as Milwaukee kept pace in the wild-card chase with a home victory over Cincinnati.

Singer (8-4) scattered four hits, struck out six and walked one in running his career record against the Tigers to 6-0 in 10 starts, while dropping his ERA against them to 2.44. Kansas City rookie Drew Waters doubled in two runs in the second inning and Michael Massey launched a solo home run in the fourth. Nick Pratto also had an RBI for the Royals.

Detroit left-hander Tyler Alexander (3-10) was making his first career start against Kansas City after nine relief appearances. He gave up four runs on six hits with two strikeouts and a walk.

Brian Anderson belted two homers and drove in all three Marlins runs.Mets catcher Tomas Nido had perhaps his best game of the season, going 3-for-4 with three RBIs, three runs and his first homer of the season.

Jeff McNeil went 3-for-4 with two runs and Eduardo Escobar slugged a homer as New York (89-52) banged 14 hits and improved to 46-22 this year against the National League East.

Steven Kwan went 3-for-5 with a home run and two runs scored as visiting Cleveland completed a three-game sweep of Minnesota.

Cleveland starter Shane Bieber allowed one run over 6 1/3 innings to record his 10th win of the season. He struck out seven batters. Along with Kwan’s efforts, Andres Gimenez added a home run and Myles Straw recorded three hits.

Adolis Garcia connected on a two-run home run in the third inning, and Leody Tavares belted a solo shot in the eighth inning. Nathaniel Lowe went 3-for-4 with an RBI as the Rangers snapped their three-game losing streak.

The Blue Jays had their three-game winning streak come to an end, but they took two of three in the series. The Blue Jays were 0-for-10 with runners in scoring position.

Zac Gallen started the game with three shutout innings to extend his scoreless streak to an Arizona franchise record, and the Diamondbacks beat Colorado in Denver. Jake McCarthy had four hits and three RBIs and Josh Rojas, Christian Walker and Emmanuel Rivera had two hits apiece for Arizona.

Gallen (12-2) finished with 11 strikeouts in six innings while breaking Brandon Webb’s record of 42 straight scoreless innings set July 20-Aug. 17, 2007 for the Diamondbacks. Gallen retired the first nine batters he faced to push his streak to 44 1/3 innings before giving up a run to open the bottom of the fourth.

Ryan McMahon homered among his two hits and Yonathan Daza also had two hits for Colorado.

Giancarlo Stanton added a three-run shot for the Yankees and Oswaldo Cabrera had a two-run blast for his first career major league homer.

Alec Bohm hit a tiebreaking homer in the seventh inning for host Philadelphia, which overcame a three-run deficit in addition to the longest in-game rain delay in franchise history to complete a three-game sweep of Washington.

Bryce Harper hit an RBI double in the first and Aaron Nola tossed two scoreless innings for the Phillies before the heavy rain arrived. A delay of 3 hours and 36 minutes followed, the longest rain delay of any kind in a home game for Philadelphia.

Rhys Hoskins tied the game for Philadelphia by hitting a three-run homer in the fifth. Joey Meneses had two RBIs for the Nationals, who have lost five of six.

After getting drubbed in three straight losses by a total score of 29-7 on the first three days of the four-game set, the A’s went on the attack against Chicago starter Johnny Cueto (7-8) and four relievers to the tune of 14 hits.

Eugenio Suarez homered with two outs in the bottom of the ninth inning off Kenley Jansen to cap one of the wildest finishes of the season as Seattle edged visiting Atlanta.

The winning blast came one out after rookie Julio Rodriguez homered to left to tie the score. Suarez, Rodriguez and Atlanta rookie Michael Harris II each homered twice — with all three players going deep in the ninth inning.

Harris launched a three-run shot against Diego Castillo — the ball went off the facade of the third deck in right field — with two outs in the top of the inning to pull the Braves within 6-5.