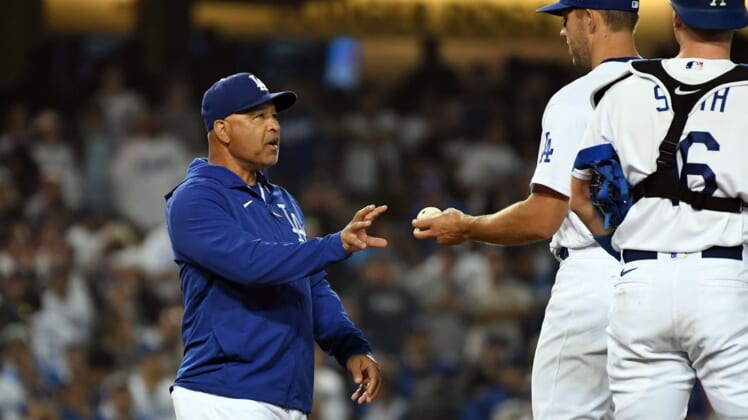 Tyler Anderson lost a no-hit bid with one out in the ninth inning while leading the Los Angeles Dodgers to a 4-1 victory over the visiting Los Angeles Angels on Wednesday.

On the verge of the third no-hitter of the major league season, Anderson struck out former American League MVP Mike Trout to open the ninth inning, but reigning MVP Shohei Ohtani ripped a line-drive triple to right, out of reach of a diving Mookie Betts toward the right-field line.

Anderson, a 32-year-old left-hander who has pitched for five clubs in the past four seasons, threw a career-high 123 pitches while improving to 8-0 on the year and dropping his ERA to 2.82. He wasn’t even a member of the Dodgers’ rotation until late April, when Andrew Heaney went on the injured list.

After Ohtani’s triple, Anderson exited having walked two and struck out eight. Dodgers closer Craig Kimbrel entered and gave up an RBI single to Matt Duffy. Will Smith and Trea Turner hit home runs for the Dodgers, who swept the two-game set with the Angels after they were swept in a three-game series against the rival San Francisco Giants over the weekend.

Craig Counsell became the winningest manager in Milwaukee history in riding a seven-run fifth inning to a blowout victory over host New York.

The win — just Milwaukee’s third in 13 games this month — was Counsell’s 564th as Milwaukee manager, breaking a tie with Phil Garner. Counsell has managed 108 fewer games than Garner. The seven runs in the fifth inning were more than the Brewers scored in any of their first 12 games this month.

The Mets’ NL East lead slipped to four games over the surging Atlanta Braves, who won their 14th straight on Wednesday. Jeff McNeil had both Mets RBIs with a homer and an RBI single. Outfielder Starling Marte left after he was hit on the right hand by a pitch. X-rays were negative for a fracture.

Machado’s milestone RBI single opened the scoring in the first, his homer highlighted a six-run fifth and he added a run-scoring hit late for the Padres, who set season highs for runs and hits (21). The Padres also tied a major league season high with 11 extra-base hits.

Chicago received two hits apiece from Jurickson Profar, Jake Cronenworth, Luke Voit and Jorge Alfaro. Off to a franchise-best 40-24 start, the Padres have won 10 of 13. The Cubs’ Christopher Morel had two hits, including his fourth homer.

Yoan Moncada had five hits, including a three-run homer, and drove in five runs as Chicago completed a three-game sweep of host Detroit.

Garrett Stubbs hit a three-run, walk-off homer with two strikes and two out in the ninth inning, leading host Philadelphia to a dramatic win over Miami.

Philadelphia had gone 0-for-10 with runners in scoring position before Stubbs clubbed a 2-2 slider from left-handed closer Tanner Scott (2-2). The Phillies have won 11 of their past 13 games.

With one out in the ninth, the Phillies got a single from Alec Bohm and pinch-hitter J.T. Realmuto’s seven-pitch walk. After pinch-hitter Yairo Munoz struck out, Stubbs launched his 385-foot blast to right. It was his first career walk-off home run. Miami shortstop Miguel Rojas went 2-for-3 with his fifth homer.

Pinch-hitter Andrew Benintendi doubled and scored the tie-breaking run in the eighth inning while four relievers combined to shut out host San Francisco over the final five innings as Kansas City avoided a series sweep.

Closer Scott Barlow pitched out of an eighth-inning jam and cruised through the ninth for his seventh save, helping the Royals snap a four-game losing streak by winning the finale of the three-game set. The Royals won despite getting just four hits, with Bobby Witt Jr. having two of them.

The Giants were seeking a second straight series sweep and a sixth consecutive win. Tommy La Stella went 2-for-4 for San Francisco, which had seven hits.

Vladimir Guerrero Jr.’s fourth hit of the game drove in the winning run in the 10th inning and Toronto defeated visiting Baltimore.

Guerrero’s single against Felix Bautista (2-2) brought home automatic runner Bo Bichette with the winning run after Toronto had squandered an early 5-0 lead. The Blue Jays have won two of the first three in the four-game set. Teoscar Hernandez and Matt Chapman each hit a two-run home run and Guerrero added a solo homer for Toronto.

Ryan Mountcastle had two home runs and three RBIs for Baltimore. Adley Rutschman hit his first career home run, a two-run blast, for the Orioles. The RBIs were also the first of his career.

Ryan Jeffers singled home the game’s first run with two outs in the seventh inning and Minnesota went on to defeat host Seattle.

Mariners left-hander Marco Gonzales (3-7) was the hard-luck loser, allowing just one run on three hits in 6 2/3 innings, with two walks and two strikeouts.

Martin Maldonado drove in three runs with a double and a solo home run as Houston scored six runs in the first inning and rolled past Texas in Arlington, Texas.

Astros pitchers Luis Garcia and Phil Maton performed a first in major league history, according to MLB.com. They became the first two pitchers to throw an immaculate inning — three strikeouts on nine pitches when facing just three batters — in the same game. It hadn’t been done by two pitchers on the same date, either. The victims were the same three hitters in each inning: Nathaniel Lowe, Ezequiel Duran and Brad Miller.

The Rangers were limited to four hits. Adolis Garcia had two of them, and Kyle Seager hit a solo home run.

Geraldo Perdomo went 2-for-4 with a home run and three RBIs, David Peralta doubled and also had an RBI single to highlight a four-run eighth inning, and Arizona beat Cincinnati in Phoenix.

After hitting four of the first eight batters he faced to set a single-game franchise record, starter Zac Gallen went on to retire 16 consecutive hitters to close his outing. He allowed two runs on two hits over seven innings while striking out five.

Brandon Drury homered and Jonathan India had an RBI double for Cincinnati, which had a three-game winning streak snapped. Reds reliever Art Warren (2-3) allowed four runs on three hits in just one-third of an inning.

Yankees left-hander Nestor Cortes (6-2) gave up one run and three hits in 5 1/3 innings, striking out four and walking three. He has allowed three runs or fewer in 20 of his past 21 starts.

Boston continued its season-long dominance of visiting Oakland, logging 13 hits on the way to an easy win.

Alex Verdugo and Xander Bogaerts had three hits apiece for Boston, which has won all five games against the Athletics, outscoring them 36-6. Verdugo homered and drove in four, while Bogaerts hit two doubles, scored two runs and had two RBIs. Rafael Devers hit the other Red Sox home run — his fourth in as many games and 16th of the season — and scored three times.

Austin Riley belted a pair of two-run homers to help visiting Atlanta extend its winning streak to 14 games with a victory over Washington.

The Braves’ winning streak is the second-longest in franchise history, with the previous 14-game run set in 2013. Atlanta can match the franchise record of 15 set by the 2000 squad with a road victory over the Chicago Cubs on Friday.

Atlanta starter Spencer Strider (3-2) allowed two runs on one hit and struck out a career-high 11 batters over 5 2/3 innings. Luis Garcia launched a solo homer in the fifth inning for Washington, which has lost four in a row and seven of its last nine games overall.

In his first start of the season after recovering from shoulder bursitis, the Cardinals’ Jack Flaherty worked three innings while hitting his 60-pitch target. He allowed four runs (two earned) on three hits, two walks and a hit batter. Andre Pallante (2-1), the third Cardinals pitcher, allowed two runs in 2 1/3 innings to absorb the loss.

Jose Ramirez went 4-for-5 and center fielder Steven Kwan made a stellar catch to prevent at least one run from scoring to help the Cleveland defeat Colorado in Denver.

Amed Rosario went 3-for-4 with his first homer and scored four times as the Guardians earned their third straight win and their 12th in 15 games. Colorado has dropped nine of 13. Cleveland reliever Bryan Shaw (3-0) pitched a perfect eighth, and Rockies starter Austin Gomber (3-7) gave up five runs and nine hits over 4 2/3 innings.

The Rockies moved within 6-5 with two outs in the seventh when Yonathan Daza hit an RBI single to center off Nick Sandlin. Trevor Stephan entered with runners on first and third, and Jose Iglesias greeted him with a deep line drive to left. Kwan made a diving catch on the warning track to keep the Guardians ahead.