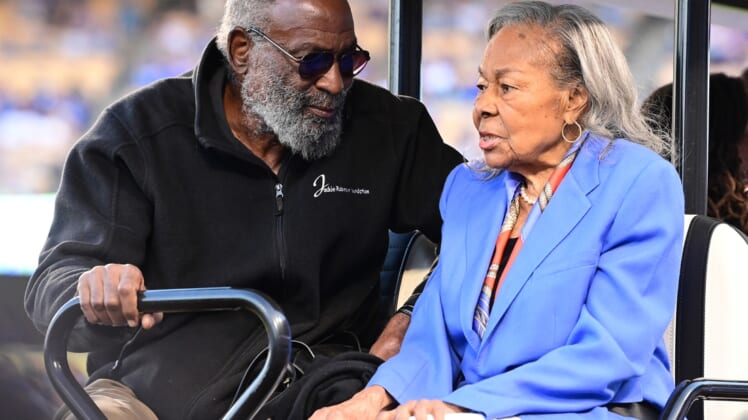 Gavin Lux singled, tripled and scored twice in his return to the lineup as the Los Angeles Dodgers extended their winning streak to four games with a 3-1 victory over the visiting Cincinnati Reds on Friday.

Tony Gonsolin pitched four scoreless innings and Trea Turner had two hits, including an RBI triple for Los Angeles, who won on Jackie Robinson Day. MLB held a league-wide celebration on Friday to remember the former Dodgers standout who became the majors’ first Black player 75 years ago to the day.

Jackie Robinson’s widow, 99-year-old Rachel Robinson, was honored on the field before the game.

Turner extended his hitting streak to 26 games going back to last season, the third longest in the club’s Los Angeles history.

Shohei Ohtani hit two of the Angels’ five home runs — his first two long balls of the season — as Los Angeles erased a four-run deficit to prevail in Arlington, Texas.

Austin Warren (1-0), one of four Angels relievers, got the victory, while Raisel Iglesias pitched a scoreless ninth inning for his second save. Charlie Culberson had a two-run double and a run-scoring groundout for the Rangers, who got two hits of their eight hits from Nick Solak.

Robinson Cano and Starling Marte also homered and stole a base for the Mets, who overcame the absence of Brandon Nimmo and Mark Canha — each of whom reportedly tested positive for COVID-19 — to win their third straight game.

The Diamondbacks scored three runs or fewer for the fifth time in seven games. Daulton Varsho went deep for Arizona.

Nelson Cruz and Josh Bell each drove in three runs to lift visiting Washington over Pittsburgh.

Hoy Park supplied the runs with a two-run single for the Pirates, who had won three of their previous four. Pittsburgh starter Mitch Keller (0-2) gave up four runs and seven hits in 3 2/3 innings with four strikeouts and three walks.

Host Chicago got a strong outing from starter Dylan Cease and some power from an unexpected source in sending Tampa Bay to its third straight loss and fourth in five games.

Cease (2-0) pitched 5 2/3 innings and allowed only one run. He held the Rays to three hits while striking out eight and walking two. Liam Hendriks worked a perfect ninth for his third save. Two of Chicago’s six hits came from No. 9 batter Jake Burger, including a solo home run.

Drew Rasmussen (0-1) took the loss for the Rays, who scored their runs in the sixth on RBI doubles by Ji-Man Choi and Yandy Diaz. Rasmussen went five innings, allowing three runs on five hits.

The Giants prevailed in their first visit to Cleveland since 2008. The Guardians lost while playing in Cleveland under their new name for the first time. Rodon (1-0), who no-hit Cleveland last season while with the Chicago White Sox, allowed just one run and two hits in seven innings this time around. He walked two and struck out nine.

Guardians starter Zach Plesac (0-1) surrendered two runs on seven hits in 5 1/3 innings. He walked one and struck out four.

Ryan (1-1) allowed just five hits and one run in his seventh career start. Gary Sanchez and Miguel Sano drove in two runs apiece as the Twins broke a two-game skid.

Alex Verdugo’s homer started the Red Sox off in the second, and they climbed back into the game with a three-run eighth inning before the Twins’ Emilio Pagan struck out two in the bottom of the ninth to clinch the win.

Phillies starter Zach Eflin (0-1) gave up six hits, one walk and four runs in four innings. He struck out four. Bryce Harper, the reigning National League MVP, went 0-for-4 with three strikeouts and is batting just .138 this season.

Gonzales (1-1) allowed one run on four hits with no walks and six strikeouts. Eugenio Suarez added a two-run homer in the eighth inning to cap his three-RBI night.

Vladimir Guerrero Jr. hit his fifth homer of the season in the first inning and Toronto went on to defeat visiting Oakland.

Guerrero was 2-for-3 with an intentional walk. Lourdes Gurriel Jr, added two hits, including an RBI double, Zack Collins had two hits with an RBI single, and Raimel Tapia also had two hits.

Toronto starter Ross Stripling allowed no runs and two hits with no walks while striking out three in four innings. The win went to Adam Cimber (3-0). Oakland starter Daulton Jefferies (1-1) allowed two runs, seven hits and one walk with two strikeouts in 4 1/3 innings.

Miles Mikolas took a one-hitter into the seventh inning and St. Louis jumped on Freddy Peralta early, pounding out a victory over host Milwaukee.

Mikolas (1-0) allowed only a single and walk through six innings, both to Rowdy Tellez, before giving up two singles in the seventh. St. Louis scored four in the first off Peralta (0-1), who lasted just three innings.

Mikolas struck out seven in his 91-pitch outing to improve to 6-2 in his career against Milwaukee, his top win total against any team. Tommy Edman and Nolan Arenado each had a two-run homer to account for the final four runs for the Cardinals, who finished with 14 hits.

Ramos Urias ended the game with a bases-loaded walk in the 11th inning to fuel host Baltimore to a victory over New York.

With Austin Hays stationed at second to begin the 11th inning, Anthony Bemboom and Kelvin Gutierrez joined him on the basepaths after each worked a one-out walk from Clarke Schmidt (0-2).

Aroldis Chapman relieved Schmidt and promptly struck out Cedric Mullins. Chapman tossed two quick strikes to Urias before unleashing four straight balls to end the game. Joey Krehbiel (1-0) picked up the win after allowing one hit and striking out a batter in one scoreless inning.

Spencer Torkelson hit a two-run home run to lift visiting Detroit over Kansas City. The Royals have lost five straight games, while the Tigers have won two straight for the first time this season.

Twenty of the past 25 games between the two teams have been decided by two runs or fewer. Jacob Barnes (1-1) earned the win with 1 1/3 perfect innings. Michael Fulmer pitched a 1-2-3 ninth for his first save.

Ty Blach (1-0) tossed 1 2/3 innings of scoreless relief. Daniel Bard earned his third save despite allowing a run in the ninth.

Willson Contreras had three hits, including two doubles, Patrick Wisdom had two doubles and Jonathan Villar also had two hits for the Cubs.

Adam Duvall lined broke a tie by lining a two-run double off San Diego reliever Pierce Johnson with two outs in the eighth inning to lead visiting Atlanta to victory.

Veteran reliever Darren O’Day (1-0) earned the win with a perfect seventh inning, which included two strikeouts. Kenley Jansen recorded his first save as a member of the Braves and the 351st of his career.

Four Atlanta relievers retired 12 of the 13 hitters they faced. Johnson (0-1) took the loss.