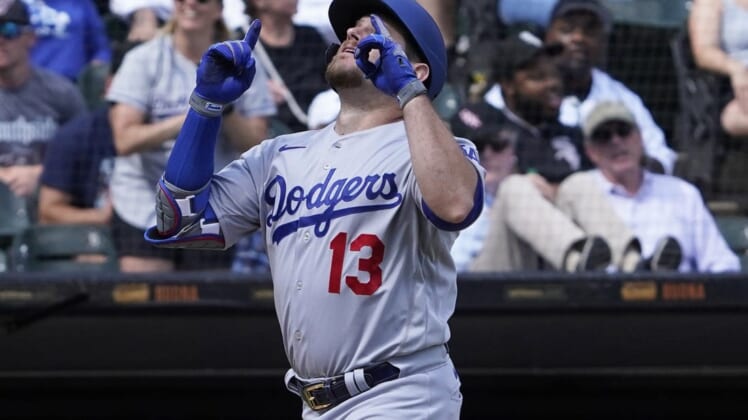 Max Muncy homered and drove in five runs as the visiting Los Angeles Dodgers withstood a ninth-inning rally to beat the Chicago White Sox 11-9 in the rubber match of a three-game interleague series on Thursday.

Freddie Freeman had three hits and three RBIs while Gavin Lux went 4-for-4 with an RBI for the Dodgers, who led 11-7 before Daniel Hudson allowed two runs in the ninth. Hudson struck out pinch hitter Gavin Sheets with two runners on to end the game.

Jake Burger homered for the second straight game for Chicago, which has lost eight of its past 12. White Sox starter Dylan Cease (4-3) cruised through the first four innings before running into trouble in the fifth, when Los Angeles sent 11 batters to the plate and scored six runs to take the lead.

McClanahan (7-2) allowed an unearned run on two hits, while striking out nine and walking one. Ji-Man Choi slugged a two-run homer and Kevin Kiermaier went 2-for-3 to account for the Rays’ three hits. Jason Adam handled the ninth to finish the two-hitter and earn his second save.

Josh Rojas singled home the tying and go-ahead runs in a four-run ninth inning as visiting Arizona rallied from a three-run deficit to beat Cincinnati.

Reds closer Tony Santillan (0-1) walked the leadoff batter in the ninth, committed a key throwing error and allowed four runs, two earned, while retiring just one batter. After Alek Thomas singled home Pavin Smith, Santillan’s throwing error to second base on a fielder’s choice put runners on first and second and none out. Rojas later brought them home.

The red-hot Joey Votto had two hits and knocked in two runs for the Reds. Cincinnati starter Tyler Mahle allowed just one run over six innings, while Arizona’s Mark Melancon (2-6) pitched a scoreless eighth for the win.

Kyle Schwarber and Odubel Herrera each belted two-run home runs and Bryce Harper had a solo shot to propel visiting Philadelphia over Milwaukee.

Didi Gregorius had an RBI double among his three hits to help the Phillies complete a three-game sweep. Philadelphia has scored 53 runs during its season-high, seven-game winning streak.

Willy Adames and Hunter Renfroe each belted a solo homer and former Phillie Andrew McCutchen added an RBI single for the Brewers, who have been outscored 38-9 during their six-game losing skid.

Yonathan Daza delivered a tiebreaking RBI single in the fourth inning for Colorado, which took advantage of four errors to earn a victory at San Francisco.

The Giants’ Austin Wynns, acquired from the Philadelphia Phillies on Wednesday, went 2-for-2 in his team debut and was the lone San Francisco player with multiple hits.