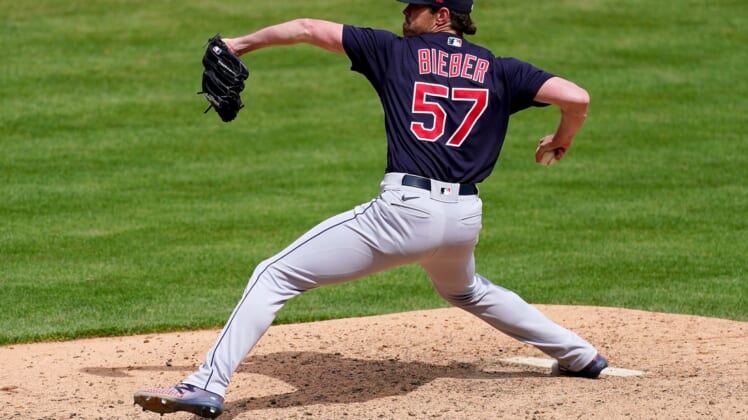 Shane Bieber tossed eight innings and became the first pitcher in modern baseball history to strike out at least 10 batters in his first four starts of a season as the Cleveland Indians snapped the Cincinnati Reds’ seven-game home winning streak with a 6-3 victory on Sunday.

Looking to help the Indians avoid being swept, Bieber (2-1) allowed three runs, six hits and fanned a season-high 13 while walking two. According to the Elias Sports Bureau, Bieber is the first major leaguer since the mound was placed at its current distance in 1893 to strike out at least 10 in his first four starts.

On Sunday, Bieber was aided by a three-run homer from Roberto Perez, Jordan Luplow’s two-run shot and a solo blast via Jose Ramirez. Yu Chang also had two hits as Cleveland capped a 3-4 road trip.

Joey Votto had three hits with two RBIs and ex-Indian Tyler Naquin clubbed his sixth homer for the Reds, who fell to 7-2 at home.

Harper reached base safely all four times and also doubled, singled and walked. Jean Segura added a pair of hits and extended his hitting streak to nine in a row. Nola (1-1) struck out 10 and walked none. It was Nola’s 17th career game with at least 10 strikeouts. He threw 109 pitches for his first career nine-inning complete game.

Hendricks (0-2) became the first pitcher in Cubs history to surrender four home runs in the first inning and the ninth all-time. He allowed seven runs on seven hits in four innings with three walks and two strikeouts. Anthony Rizzo homered twice for Chicago.

Bryse Wilson pitched five innings, giving up seven hits and three runs (two earned) for Atlanta. Wilson (1-0) spaced one walk and one strikeout while throwing 50 of his 69 pitches for strikes. Atlanta used a 14-hit attack in the series finale to take two of three games, with Heredia going 3-for-4 with six RBIs.

The Giants got an RBI single from Alex Dickerson and four perfect innings from their bullpen. Tyler Rogers pitched the ninth, earning his fourth career save and his first this season.

Miami’s Pablo Lopez (0-2) struck out a career-high nine batters in six innings — but still got the loss. He allowed six hits, two walks and one unearned run. Marlins center fielder Starling Marte left the game in the ninth inning with an unspecified injury. Marte, who has a history of oblique injuries, departed in the middle of his at-bat and grabbed at his side.

Yoshi Tsutsugo hit a tiebreaking double with one out in the seventh inning off Gerrit Cole, lifting visiting Tampa Bay over struggling New York.

Cole (2-1) retired 13 straight hitters before Joey Wendle scorched a single up the middle. Three pitches later, Tsutsugo laced a 1-1 changeup to the warning track in right-center field, allowing Wendle to score standing up from first.

Eric Hosmer broke a tie with a two-out RBI single in the bottom of the eighth and slumping Tommy Pham followed with a two-run double as host San Diego ended Los Angeles’ eight-game winning streak.

In the seventh, Hosmer followed Manny Machado’s third single of the game with an RBI double to tie the score 2-all. An inning later, he grounded a single to center to score Jurickson Profar and is now hitting .750 (9-for-12) with runners in scoring position and two out.

Chris Taylor hit a two-run home run for the Dodgers, while Los Angeles starter Trevor Bauer allowed just one run over six innings and left with a 2-1 lead.

Josh Rojas and Carson Kelly homered and Arizona defeated host Washington to earn a split of the four-game series.

Diamondbacks starter Madison Bumgarner (1-2) turned in his best outing of the young season, allowing a run on two hits and a walk over five innings. He struck out five. Stefan Crichton pitched the ninth for his first save.

Paolo Espino (0-1), who was promoted after Stephen Strasburg went on the injured list with shoulder inflammation, allowed two runs on five hits in 4 1/3 innings in taking the loss. Trea Turner hit two solo homers for Washington.

Tim Anderson led off with a home run, Dallas Keuchel pitched five strong innings and Chicago edged host Boston in the opener of a split doubleheader.

Anderson finished 3-for-4 as the White Sox snapped a two-game skid. Keuchel (1-0) gave up two runs on six hits, walking none and striking out one. Liam Hendriks worked around a two-out single in the bottom of the seventh for his second save.

Enrique Hernandez hit a home run and Bobby Dalbec finished with a pair of hits for the Red Sox, who lost for just the second time in their past 12 games.

Yermin Mercedes homered to back an electric Michael Kopech in his first start in 2 1/2 years, and Chicago earned the doubleheader sweep at Boston.

Kopech struck out four, allowing one run on one hit and one walk over three-plus innings as he started for the first time since Sept. 5, 2018. He pitched in the bullpen after Tommy John surgery before opting out of the 2020 campaign. Matt Foster (1-1) pitched 1 2/3 innings of relief for the win.

J.D. Martinez drove in the lone run for the Red Sox, who have lost three of four since a nine-game winning streak.

The Mets captured two out of the three games in a series that was condensed to two days after Friday’s contest was postponed due to inclement weather. Stroman (3-0) was dominant throughout — allowing one run on three hits — and needed just 58 pitches to get through six innings and 90 before exiting the contest.

Trevor Story had two hits for the Rockies, who have lost eight of their last nine games.

Mitch Haniger had a double, triple and three RBIs and six pitchers combined on a one-hitter as Seattle defeated visiting Houston.

Matt Olson scored the game-winning run on a throwing error by Jeimer Candelario in the bottom of the ninth inning to lift Oakland to a home win over Detroit.

The Tigers finished a 10-game road trip at 3-7. Harold Castro had three hits and knocked in both runs for Detroit, which wasted a terrific outing by starter Matthew Boyd, who gave up two runs, four hits, one walk and struck out five in 7 1/3 innings of work.

Texas won a pitchers’ duel in Arlington when Nate Lowe singled in the bottom of the 10th inning to beat Baltimore.

Lowe’s single through the left side of the infield against Travis Lakins (1-1) came after a fielder’s choice, two wild pitches and two walks loaded the bases. John King (1-0) picked up the win after surviving a Baltimore threat in the top of the 10th that saw the go-ahead run thrown out at the plate.

Salvador Perez homered in his second straight game to lead Kansas City over visiting Toronto in a game of missed opportunities, as the teams combined to leave 15 men on base in the first four innings.

The Royals won three of the four games of the series as Perez, who ended Saturday’s second game with a walk-off home run, hit his homer 441 feet into the fountains in left center for his fifth of the young season.

Kyle Zimmer (1-0) picked up the win. Greg Holland picked up his second save. Royals pitchers retired the final 18 Toronto batters.

Colin Moran drove home the go-ahead run with a 10th-inning double, and had four RBIs as Pittsburgh defeated host Milwaukee.

Moran, who also had a three-run homer, doubled off right-hander J.P. Feyereisen (0-1) into the right-field corner to break a 5-all tie and score Bryan Reynolds. Richard Rodriguez (1-0) pitched two perfect innings and struck out Travis Shaw looking to end the game.