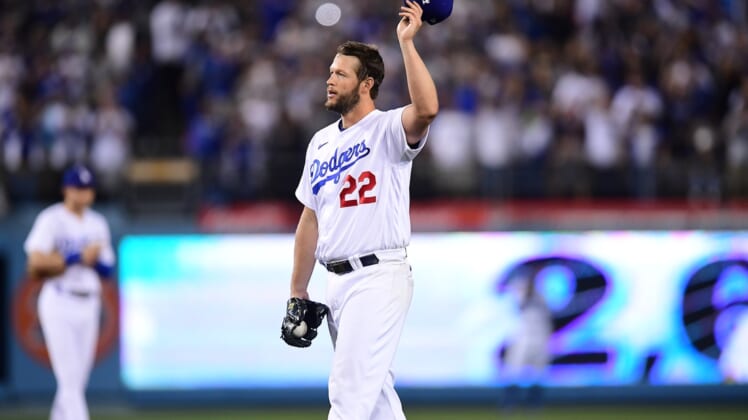 Kershaw entered the game three strikeouts shy of Don Sutton’s record of 2,696 in a Dodgers uniform. Kershaw finished the night with seven strikeouts. He didn’t figure in the decision, giving up one run on four hits while issuing two walks.

Javier Baez and Austin Meadows drove in two runs apiece for the Tigers while Jeimer Candelario had two hits and scored two runs.

Tigers starter Beau Brieske, making his second career appearance, gave up one run on three hits and struck out three in five innings. Jacob Barnes (2-0) pitched an inning of scoreless relief and was credited with the win.

Arizona had just two hits to that point. The home run by Marte was his first of the season and also the first allowed this season by St. Louis right-hander Miles Mikolas, who was engaged in a pitchers’ duel with Arizona right-hander Merrill Kelly through seven innings.

Marte’s home run to right field led off the eighth inning, and one out later, Nick Ahmed cleared the left-field wall to put Arizona ahead 2-0. Marte was in a 1-for-28 slump before the home run.

Ke’Bryan Hayes raced home from first as Brian Reynolds reached on an error in the 10th inning to give Pittsburgh a win over visiting San Diego.

Michael Chavis hit a two-run homer and an RBI single and Josh VanMeter delivered an RBI double for the Pirates. Pittsburgh starter JT Brubaker gave up three runs and five hits in five innings. Chris Stratton (1-1) pitched the ninth and 10th for Pittsburgh to get the win.

Yordan Alvarez hit a home run for the Astros, who had a four-game winning streak snapped.

Berrios (2-0) allowed one run, seven hits and two walks while striking out five in 5 2/3 innings. Jordan Romano earned his American League-high 10th save of the season with a perfect ninth that included a strikeout.

Jason Vosler blasted a home run into the San Francisco Bay as the hot Giants avenged a blowout loss in the series opener by beating Washington.

Logan Webb (3-1) worked around 11 hits in six innings and an early 2-0 deficit to beat the Nationals for the second time in seven days. He was charged with three runs, walking one and striking out three. Thairo Estrada drove in three runs for the Giants.

Alcides Escobar, Josh Bell, Yadiel Hernandez and Victor Robles had two hits apiece for the Nationals, who lost for the ninth time in their last 10 games despite matching the Giants in hits with 11 apiece.

Kyle Schwarber belted a two-run homer in the seventh inning to break a streak of 15 1/3 scoreless innings against New York pitching and led visiting Philadelphia to the victory.

Schwarber’s home run, his fifth, came on a 2-1 pitch off reliever Adam Ottavino (1-1). Rhys Hoskins added a solo homer, his second, off Sean Reid-Foley leading off the eighth inning. That gave the Phillies a 4-1 lead. James Norwood (1-0) worked a perfect sixth inning for his first major league win in 35 career appearances.

Veteran New York right-hander Taijuan Walker, making only his second start of the season after missing the last 18 days because of shoulder bursitis, allowed two hits in five scoreless innings. He wasn’t involved in the decision.

Minnesota scratched Byron Buxton due to a sore right hand but received a lift from Kyle Garlick, who belted two home runs in a win over host Tampa Bay.

Garlick celebrated his first career multi-home run game since joining the big leagues in 2019. Getting the start in left field, and hitting third, he went deep twice off Shane McClanahan (1-2).

Max Kepler, who later replaced Garlick, added a two-run homer and drove in three runs. Carlos Correa also had three hits and an RBI as the Twins didn’t miss a beat without Buxton, who bruised his hand after being hit by a pitch on Friday.

Rowdy Tellez also went deep and had three RBIs as Milwaukee homered three more times after hitting six during Friday’s 11-1 rout. Yelich and Renfroe each had three hits and two RBIs on Saturday. Renfroe, who homered twice Friday, went back-to-back with Yelich during a three-run eighth for the Brewers.

After striking out a career-high 13 at Philadelphia last Sunday, Lauer (2-0) was stellar once again for Milwaukee, which has won of 11 of its last 13 games. Cubs starter Justin Steele (1-3) allowed three of his four runs in the first inning, but just two were earned. Steele allowed seven hits in three innings.

Right-hander Dane Dunning pitched a season-high 7 2/3 innings and allowed only one run on three hits to help Texas end a four-game losing streak by beating Atlanta in Arlington, Texas.

Dunning (1-1) struck out five of the first six batters he faced and finished with seven strikeouts to match his season high. He did not issue a walk and retired 14 in a row before Adam Duvall doubled with one out in the eighth. Joe Barlow pitched a perfect ninth inning to earn his first save.

Atlanta starter Bryce Elder (1-3) had his homecoming ruined. The rookie, who grew up not far from Arlington, worked 4 1/3 innings and allowed three runs on four hits, three walks and one strikeout. Spencer Strider finished the game with 3 2/3 scoreless innings with five strikeouts.

Velasquez (1-2) was one strike away from completing six innings, but with a 2-2 count on Mike Trout, the game was halted by rain for 61 minutes. When play resumed, Trout grounded out on the first pitch by Tanner Banks.

Velasquez gave up four hits, struck out six and did not walk a batter. Anderson’s home run led off the bottom of the first inning and Robert’s three-run homer came in the fifth. Angels starter Jose Suarez (0-2) went four innings, giving up four runs on eight hits with two walks and four strikeouts.

The Marlins will try for a three-game sweep on Sunday. Luzardo (2-1) allowed just two hits, two walks and one run, striking out five. Miami’s fourth pitcher, Anthony Bender, pitched around two hits in the ninth to get his sixth save.

Jorge Mateo scored the tiebreaking run on a throwing error by reliever Hirokazu Sawamura in the 10th inning as Baltimore outlasted visiting Boston.

The Red Sox intentionally walked pinch hitter Ryan McKenna to set up a potential double play. Robinson Chirinos got a bunt down off Sawamura (0-1). It went slightly up in the air on the third base side of the mound.

Sawamura was slow to field the ball and rushed his throw to third, causing the ball to sail well over Rafael Devers’ head and down the third base line. Mateo scored easily to give Baltimore its second walk-off win of the season. The Orioles also halted a five-game losing streak.

Daniel Bard pitched the ninth for his sixth save for Colorado.

Tyler Naquin and Aramis Garcia homered for Cincinnati, which has lost five in a row and 18 of its last 20.

Palacios was called upon to face Dany Jimenez (1-1) with two on and two out. He turned on Jimenez’s 3-1 offering and hit it over Cristian Pache’s reach in deep center field, allowing two runs to score easily. Nick Sandlin (1-1) pitched a scoreless eighth inning for the victory. Cleveland has won two straight following a seven-game losing streak.

Oakland starter Cole Irvin allowed one run on six hits over six innings. He walked two and struck out four while throwing 90 pitches. Irvin has given up a total of two runs over his last three starts covering 16 innings.