MLB roundup: Cards score 5 in 9th to rally past Nats 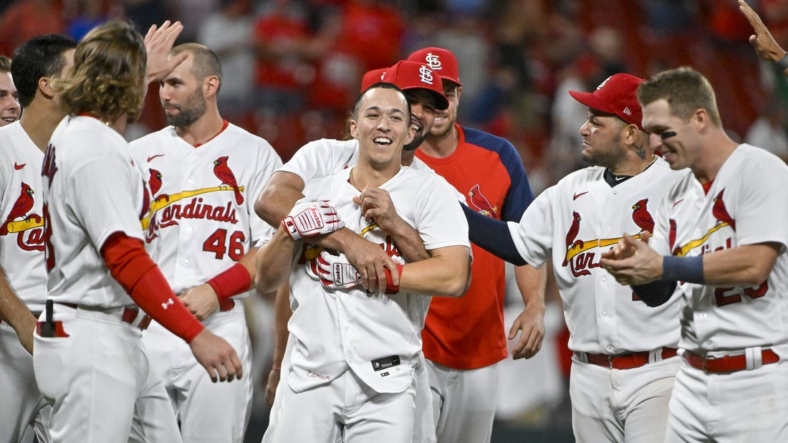 The Cardinals won for the ninth time in 11 games to increase their National League Central lead to 9 1/2 games over the second-place Milwaukee Brewers.

Starting pitcher Cory Abbott allowed one run on five hits in 4 1/3 innings for the Nationals. He struck out five batters and walked none. Kyle Finnegan (5-3) allowed five runs in two-thirds of an inning to take the loss.

Isiah Kiner-Falefa hit a game-tying single to open the 12th inning and Oswaldo Cabrera ended an 0-for-25 skid with a game-ending single four batters later as New York rallied for a victory over visiting Minnesota in the opener of a doubleheader.

The Yankees were unable to score in the 10th and 11th as Cabrera and Ronald Guzman hit into double plays. New York fell behind when Gilberto Celestino hit an RBI double in the top of the 12th against Ron Marinaccio before registering their 14th walk-off win this season.

The Yankees (82-54) won their third straight and also clinched their 30th straight winning season as Aaron Judge homered for the fourth straight game, hitting a solo shot in the fourth for his 55th of the year. He is six shy of the American League record set by Roger Maris with the Yankees in 1961.

The Yankees won their fourth straight and beat the Twins for the 10th straight time at home, including the first two games of the 2019 American League Division Series.

Tyler Naquin and Eduardo Escobar homered back-to-back in the fourth inning as visiting New York topped Pittsburgh in the first game of a doubleheader to snap a three-game losing streak.

The Pirates’ lone run came on a Taylor Heineman RBI single, which scored Greg Allen who preceded with a leadoff double.

Jeff McNeil added a two-run single, Tyler Naquin ripped an RBI double and Eduardo Escobar and Daniel Vogelbach each had an RBI single for the Mets, who regained sole possession of first place in the National League East after Atlanta had pulled even on Tuesday.

Pittsburgh starter Johan Oviedo (2-2) gave up four runs and one hit in 1 2/3 innings, with two strikeouts and five walks. The Pirates have lost six of seven.

Trea Turner delivered a go-ahead RBI double in the eighth inning and Max Muncy followed with a three-run home run as host Los Angeles pulled away from San Francisco.

Evan Phillips (6-3) did not give up a run over 1 1/3 innings to pick up the victory. Giants rookie David Villar hit two home runs, including one off Dodgers left-hander Clayton Kershaw. The Giants dropped the final two games of the series following a four-game winning streak.

Edmundo Sosa hit a home run, a double and a single and drove in three runs to lift host Philadelphia past Miami.

Jean Segura added a solo homer on Wednesday. Matt Vierling also had two hits for the Phillies, who will go for a sweep of the three-game series on Thursday. Phillies starter Bailey Falter (4-3) tossed 5 1/3 innings and allowed seven hits and two runs to go along with three strikeouts and no walks.

Charles Leblanc and Jacob Stallings led the reeling Marlins with two hits and an RBI apiece. Stallings went deep off Brogdon. Garrett Cooper and JJ Bleday also had two hits apiece for the Marlins, who took their ninth consecutive loss.

Salvador Perez hit a sacrifice fly in the ninth inning to lift Kansas City past visiting Cleveland as the Royals rallied to salvage the finale of a three-game series.

MJ Melendez drove in the tying run with a ninth-inning single. Bobby Witt Jr. was walked intentionally before Perez came to bat. Scott Barlow (6-4) picked up the win after throwing a 1-2-3 top of the ninth. Emmanuel Clase (2-4) took the loss. He walked the first two batters in the ninth to set up the decisive rally.

Elias Diaz and Yonathan Daza had two hits each and Kyle Freeland tossed six strong innings for the Rockies. Freeland (8-9) gave up one run on two hits and a walk while striking out eight.

Andrew McCutchen and Luis Urias homered and finished with two hits each for the Brewers, who lost for the fifth time in seven games. Eric Lauer (10-7) lasted just 2 2/3 innings, having allowed seven runs on six hits.

Vaughn Grissom and Dansby Swanson hit home runs, Spencer Strider overcame a shaky start to go six innings and Atlanta ran off to a seventh straight win with a victory over host Oakland.

Strider (10-4) walked three batters in the inning, including two of the first three he faced, setting the stage for an RBI double by Stephen Vogt and a run-scoring infield out by Ramon Laureano. The A’s also got a home run from Seth Brown, his 21st of the season, in the eighth inning, but the Braves did all the scoring in between.

The win allowed the Braves to match a daytime win by the New York Mets but Atlanta fell behind in the National League East race by a half game after the Mets blanked the Pirates in the second game of a doubleheader.

Yu Darvish (13-7) gave up three runs — all solo homers — on five hits in six-plus innings but still earned the win. Josh Hader pitched a perfect ninth inning for his 31st save.

Daulton Varsho homered twice for the Diamondbacks, and Corbin Carroll hit the first long ball of his career. Tommy Henry (3-4) gave up five runs on seven hits in 4 1/3 innings.

Eric Haase went 5-for-5 with two doubles and a home run to lead Detroit — which scored two runs in the ninth — past Los Angeles in Anaheim, Calif.

The Angels led 4-3 heading into the top of the ninth, but Kerry Carpenter led off the frame with a home run to tie the game at 4-4. No. 9 hitter Ryan Kreidler, playing in his sixth career major league game, followed with his first career homer to put the Tigers in front.

Both homers came against Angels lefty Jose Quijada (0-4). Tigers reliever Jose Cisnero (1-0) got the victory and Gregory Soto pitched a scoreless ninth that included strikeouts of Shohei Ohtani and Mike Trout for his 25th save.

A decision to intentionally walk the bases loaded backfired on Texas as host Houston celebrated a walk-off victory on a wild pitch.

Jose Altuve raced home on Jonathan Hernandez’s wild pitch with two outs, enabling the Astros to take two of three in the series.

In the hectic 10th inning, Mauricio Dubon bunted automatic runner Christian Vazquez to third base off Hernandez (1-2). Texas intentionally walked Altuve, and Vazquez was thrown out trying to score on Jeremy Pena’s grounder to shortstop. Yordan Alvarez was intentionally walked to load the bases for Alex Bregman. But Hernandez bounced a pitch away from catcher Sam Huff, and Altuve scored the game-winning run on the wild pitch.

Eloy Jimenez went 3-for-4 with a double, home run and three RBIs and sparked the tiebreaking rally in the eighth inning as Chicago overcame an early four-run deficit to defeat host Seattle.

Aaron Bummer (1-1) got the victory and Liam Hendriks struck out the side in the ninth for his 31st save. Seattle’s Diego Castillo (7-3) took the loss.

Eugenio Suarez homered twice for the Mariners, who lost for just the second time in their past 10 games. Seattle committed three errors, leading to six unearned runs. The Mariners appeared to be in control after scoring four times in the third, including a two-run shot by Suarez, and with starter Luis Castillo cruising. Castillo fanned the first seven batters he faced.

Reliever Yonny Chirinos won in his first appearance in more than two years, Taylor Walls singled in the only run and Tampa Bay completed a three-game sweep of Boston with a shutout in St. Petersburg, Fla.

Fully recovered from Tommy John surgery after multiple setbacks, Chirinos (1-0) took over for starter Jeffrey Springs in the fourth to pitch for the first time since Aug. 16, 2020. He got the win with three innings using 53 pitches, allowing four hits and one walk plus four strikeouts as the Rays won for the eighth time in nine games.

Enrique Hernandez produced a 2-for-5 showing with a double as Boston outhit Tampa Bay 6-4 but scored just seven runs in the three losses. Red Sox starter Nick Pivetta (9-11) went five innings and allowed the single run on two hits. He struck out three and walked three to rebound from a three-inning start against the Texas Rangers on Friday.

Manoah (14-7) struck out five and walked one, reversing a trend from disappointing results in his August starts against the Orioles. He became the seventh pitcher in the major leagues this year to reach the 14-win mark. Alejandro Kirk went 3-for-5 after a four-hit effort Tuesday night.

The Orioles have lost four of their last five games, with offensive shortcomings developing into a theme. Baltimore’s only hit after the first inning was Adley Rutschman’s one-out double in the sixth inning.

Aristides Aquino homered twice and had three RBIs while Mike Minor allowed one run over 5 2/3 innings as Cincinnati won at Chicago.

Aquino, who recorded his third career multi-homer game, finished with three hits. Jake Fraley also went deep for Cincinnati, which broke open a 2-1 game with four runs in the sixth to level the three-game series at one game apiece.

Minor (4-10) yielded 10 hits, but only an RBI single to P.J. Higgins in the second inning, en route to recording his third winning decision over a four-start stretch. He struck out three and walked one.