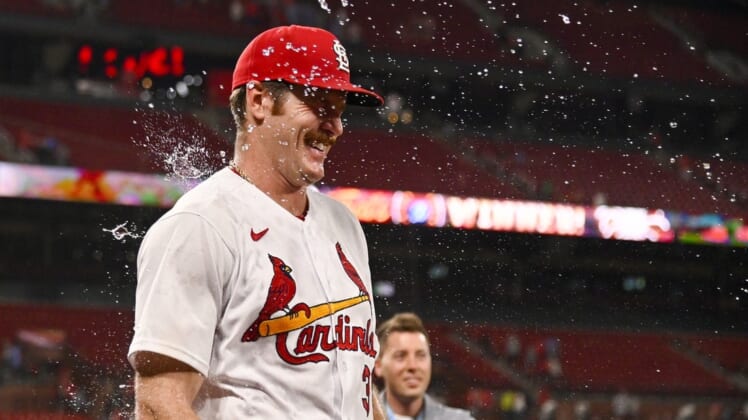 Miles Mikolas came within one out of throwing a no-hitter as the St. Louis Cardinals routed the visiting Pittsburgh Pirates 9-1 on Tuesday night to complete a doubleheader sweep.

After Mikolas retired Michael Perez on a groundout and Tucupita Marcano on a flyout in the ninth inning, Cal Mitchell launched a ground-rule double on a 2-2 pitch. Mikolas was then taken out of the game, coming up just short of the first no-hitter thrown by a Cardinals pitcher since Bud Smith accomplished the feat on Sept. 3, 2001.

Paul Goldschmidt went 4-for-4 with two homers and five RBIs for the Cardinals. Tommy Edman finished 3-for-5 with a homer and two runs, and Brendan Donovan went 4-for-5 with a double, three runs and an RBI.

The Pirates got on the board in the fourth inning when Bryan Reynolds reached on left fielder Juan Yepez’s two-base error and came around to score on a pair of groundouts.

Paul Goldschmidt hit a homer and drove in all three runs as host St. Louis defeated Pittsburgh in the first half of a day-night doubleheader.

The Pirates extended their losing streak to eight games and committed four errors, three by shortstop Diego Castillo. Yadier Molina of St. Louis became MLB’s all-time leader for putouts by a catcher when he recorded No. 14,865.

Albert Almora Jr.’s second hit of the game was a triple that drove in the winning run in the 12th inning, leading Cincinnati over Arizona in Phoenix.

Almora, who also doubled in the contest, led off the 12th with a triple into the right field corner, knocking in designated runner Matt Reynolds. Almora scored an insurance run one out later, on a single by Jonathan India.

Luis Cessa (3-1), who wild-pitched two runs across in the bottom of the 11th when Arizona was just one strike away from a win, picked up the victory. Joel Kuhnel earned his first major league save by throwing a 1-2-3 bottom of the 12th.

Gilbert (7-2), a right-hander in his first full season in the major leagues, gave up four hits, walked one and struck out six in making his sixth straight quality start. Relievers Erik Swanson, Diego Castillo and Matt Festa then each pitched a hitless inning.

Twins leadoff hitter Luis Arraez, who entered the game with a major-league-leading .362 batting average, went 0-for-4 to drop to .354. Carlos Correa and Gilberto Celestino each had two hits, but the rest of the Twins’ lineup went a combined 0-for-23.

Tony Gonsolin did not allow a run over 6 1/3 innings and Mookie Betts homered as Los Angeles ended a three-game losing streak by shutting out Los Angeles.

Gonsolin gave up just one hit, a fourth-inning single by Shohei Ohtani, as he got the best of a pitchers’ duel opposite Angels right-hander Noah Syndergaard, who gave up one run over just 4 2/3 innings.

Gonsolin improved to 8-0 on the season, tying the Houston Astros’ Justin Verlander and the Toronto Blue Jays’ Alek Manoah for the major league lead in wins. He lowered his ERA to a big-league-best 1.42 after giving up two walks and striking out six.

Kyle Tucker ripped a two-run homer in the eighth inning as Houston took advantage of a shaky Texas bullpen to prevail in Arlington, Texas.

Bryan Abreu (4-0) got the win in relief, and Ryan Pressly allowed two hits in the ninth but still earned his 12th save. John King (1-3) took the loss, giving up four runs, three of which were earned, in one-third inning.

Michael Brantley had two hits for the Astros. The Rangers’ Nathaniel Lowe went 3-for-4 with a two-run homer.

Logan Webb threw seven shutout innings and Tommy La Stella came off the bench to produce half of the Giants’ scoring with a pair of sacrifice flies as San Francisco beat visiting Kansas City.

A pitchers’ duel between Webb and Royals starter Kris Bubic went scoreless into the last of the sixth before the Giants produced a three-run uprising. Wilmer Flores and Darin Ruf drove in runs with singles, and La Stella, pinch-hitting for Evan Longoria, plated the eventual difference-maker with his first sacrifice fly. The Giants grabbed a lead they never relinquished en route to a second straight win over the Royals to start the three-game series and a fifth in a row overall.

Webb (6-2), who had never previously faced the Royals, ran his career interleague record to 3-4. He allowed five hits — all singles — in his seven innings, walking three and striking out nine.

Josh Naylor had three hits and Jose Ramirez drove in three runs and hit a tiebreaking double in the 10th inning as Cleveland beat Colorado in Denver.

The Guardians got the go-ahead run in the extra frame on Ramirez’s double off Robert Stephenson (0-1), which drove in Amed Rosario. Rosario had two hits and scored twice, Bryan Shaw (2-0) pitched one inning of relief and Emmanuel Clase got the final three outs for his 12th save for Cleveland, which has won five out of its last six.

Cleveland starter Shane Bieber cruised into the seventh, when he ran into trouble. Brian Serven singled with one out and, after Bieber got Sam Hilliard on a grounder, Charlie Blackmon homered into the Rockies’ bullpen to tie it at 3-3.

Jake Cronenworth added three hits, Nomar Mazara had two hits and three RBIs and Jorge Alfaro homered late for San Diego, which won for the ninth time in 12 games. Off to the franchise’s best start (39-24), the Padres also have won a season-high five straight on the road, where they are a National League-best 22-11.

Willson Contreras homered for two of his three hits and had three RBIs for the Cubs, who have been outscored 65-21 during their season-worst skid. Chicago has dropped four straight at home, where it is 11-22.

Jesus Aguilar homered, doubled and drove in four runs for Miami, which scored three times in the ninth inning to beat host Philadelphia.

Jacob Stallings hit a three-run home run while Avisail Garcia added a home run, double and two RBIs for the Marlins. Jazz Chisholm Jr. contributed a solo homer, and he and Jorge Soler each had two hits.

Dansby Swanson, Marcell Ozuna, Orlando Arcia and Michael Harris II also went deep for the Braves, who hit five homers for the second straight game in Washington. Atlanta is in the midst of its longest win streak since recording 14 straight victories in 2013. The franchise record is a 15-game streak in 2000.

Harris and d’Arnaud each had three of Atlanta’s 13 hits. The Braves hit back-to-back homers twice in the contest. Ehire Adrianza had two hits for the Nationals, who have dropped six of their past eight games.

Andrew Vaughn had four hits and Dylan Cease recorded another win over Detroit as visiting Chicago beat the Tigers.

Luis Robert had two hits and knocked in two runs for the White Sox, while AJ Pollock notched his sixth consecutive multi-hit game. Cease allowed a run, which was unearned, on seven hits while striking out eight and walking one in five innings. He is 10-0 in 11 career starts against Detroit.

Detroit’s Drew Hutchison, called up from Triple-A Toledo earlier in the week, gave up two runs on five hits in four innings. Victor Reyes and Harold Castro had three hits apiece, but the Tigers lost for the fourth time in five games.

Gerrit Cole bounced back from the worst start of his career to throw six shutout innings for New York as it blanked visiting Tampa Bay.

Cole (6-1) gave up five hits, struck out seven and walked one against the Rays, helping the Yankees win for the 12th time in the past 13 games. The right-hander had allowed five home runs, which included blasts from the first three batters, against the Minnesota Twins on Thursday.

Rob Refsnyder led Boston’s offense by going 3-for-4 with an RBI and a run, while Devers hit a three-run home run to blow the game open in the fourth inning. Xander Bogaerts was a perfect 2-for-2, drove in a run and walked.

Pivetta (6-5) struck out three and allowed just one run — Stephen Vogt’s solo homer in the eighth inning — on three hits and two walks to earn his sixth win in his last seven starts.

Chris Bassitt allowed three singles in eight stellar innings for his first win in over a month, Pete Alonso drove in two runs and New York extended its home winning streak to nine games with a win over slumping Milwaukee.

Bassitt (5-4) struck out seven, walked one and threw first-pitch strikes to 17 of 26 hitters. He won for the first time since pitching 5 2/3 innings of one-run ball at Philadelphia on May 8. Alonso upped his RBI total to 59. The first baseman hit an RBI single in New York’s three-run first, off Adrian Houser (3-7), and added an RBI single in the fifth that chased Houser. Jeff McNeil added an RBI double in the first and Alonso scored on a sacrifice fly by Eduardo Escobar.

Houser was tagged for four runs and eight hits in 4 2/3 innings and dropped to 0-5 in seven starts since May 5. The Brewers were blanked for the eighth time this year and lost for the ninth time in 10 games.