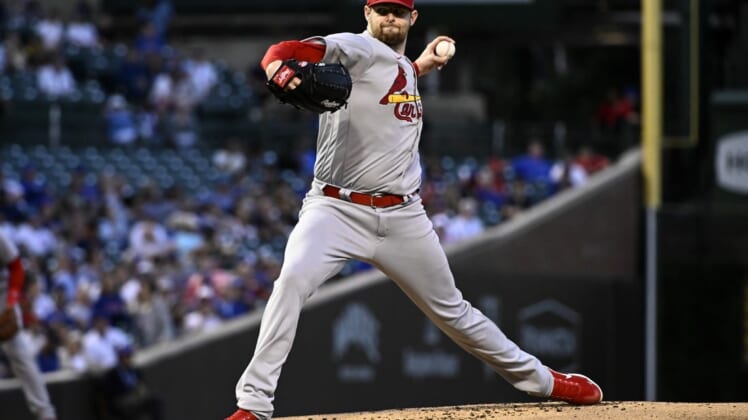 Jordan Montgomery allowed one hit while recording the first complete game of his career as the surging St. Louis Cardinals edged the host Chicago Cubs 1-0 on Monday night.

Albert Pujols continued his offensive tear at the plate, providing the Cardinals’ lone run with the 693rd homer of his career. Montgomery faced just 28 batters while leading St. Louis to its eighth straight victory, its longest winning streak of the season.

Montgomery (7-3), who had never completed more than seven innings since breaking into the majors in 2017 with the New York Yankees, yielded only Christopher Morel’s two-out, third-inning double. He struck out seven and improved to 4-0 with a 0.35 ERA in four starts for St. Louis.

Chicago starter Drew Smyly (5-7) gave up just Pujols’ seventh-inning blast in his seven-inning outing. He allowed only three other hits and two walks while striking out six.

Dodgers starter Julio Urias (13-7), who entered with a 0.95 ERA over his past six starts, all wins, saw his streak end. He gave up one run on two hits in six innings.

Aaron Judge hit a home run off Max Scherzer, his major-league-leading 47th long ball of the year, as the host Yankees won the opener of a two-game Subway Series.

The Yankees won consecutive games for the first time since getting three straight wins over the Kansas City Royals from July 28-30. Andrew Benintendi (2-for-3) accounted for New York’s other three runs. Domingo German (2-2) outpitched Scherzer, allowing two runs (one earned) on four hits in 6 1/3 innings.

Scherzer tied a season high by giving up four runs on seven hits in 6 2/3 innings. He struck out three and walked one to remain one win shy of No. 200 for his career.

Salvador Perez and Ryan O’Hearn each had two hits and an RBI to help Kansas City earn a win against visiting Chicago in a makeup game.

Amir Garrett (3-1) pitched a perfect eighth for the Royals, and Scott Barlow worked the ninth for his 20th save.

Elvis Andrus had two hits and three RBIs and Jose Abreu had three hits, two walks and two runs for the White Sox. Chicago starter Michael Kopech left after facing four batters because of a sore knee. All four batters reached base and Kopech was charged with four runs.

Corey Seager delivered a tiebreaking RBI single two innings after he was involved in a triple play for Texas, which edged Minnesota in Minneapolis.

Adolis Garcia homered in the fifth for the Rangers, who won the final three games of the four-game series and are 5-3 under interim manager Tony Beasley. The Twins, who turned their second triple play of the season, fell two games behind the idle first-place Cleveland Guardians in the American League Central.

A.J. Alexy (1-0), the second of five Rangers pitchers, earned the win by allowing one hit over 2 1/3 innings of relief. Sonny Gray (7-4) took the tough-luck loss for the Twins after allowing two runs on five hits in six innings.

Nick Castellanos hit a home run and a double and drove in two runs to lift host Philadelphia past Cincinnati.

Bryson Stott homered, Alec Bohm added three hits and J.T. Realmuto had two hits and an RBI for the Phillies, who won for just the second time in their past six games. Noah Syndergaard (8-8) tossed seven strong innings and allowed three hits and one run.

Michael Harris II hit a two-run homer to lift visiting Atlanta to a win over Pittsburgh.

The homer was Harris’ only official at-bat — he walked twice — and Vaughn Grissom was 1-for-3 with a run scored for the Braves, who have won 12 of their past 14 games. Jake Odorizzi (5-5) gave up one run and four hits in six innings to pick up his first win with his new club.

Oneil Cruz hit a solo homer for the Pirates, who have lost three in a row and nine of their last 11. Pittsburgh starter Roansy Contreras (3-4) allowed two runs and four hits in seven innings.

Springs (6-3) scattered five hits over 5 2/3 innings of one-run ball. David Peralta went 2-for-4 with a double and an RBI while Yu Chang and Arozarena contributed two hits apiece as the Rays earned their eighth win in 10 games.

David Fletcher and Andrew Velazquez each had two hits for the Angels, who managed just six hits and fell for the sixth time in seven games. Mike Trout provided Los Angeles’ only run with an RBI single.

Since returning from his injury on Aug. 5, Cabrera has not allowed a run in 22 2/3 innings over four starts. He walked three and struck out seven.