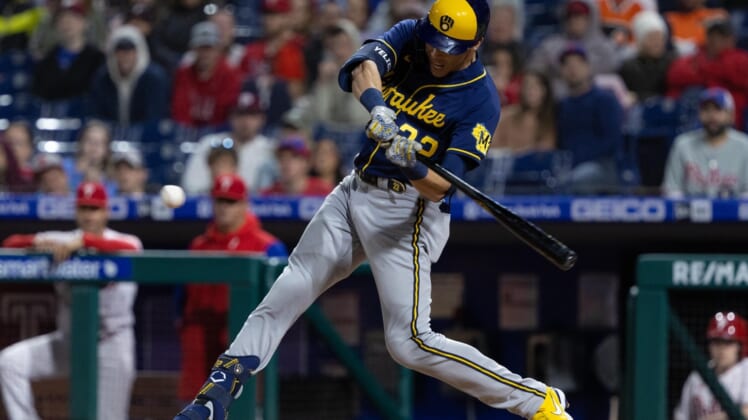 Christian Yelich hit an RBI sacrifice fly in the ninth inning for the game’s only run to lift the Milwaukee Brewers past the host Philadelphia Phillies 1-0 on Sunday.

The Brewers took two of three in the series, including the last two. They won on Sunday despite getting only three hits.

In six strong innings, Brewers starter Eric Lauer allowed five hits and no runs to go along with a career-high 13 strikeouts and just one walk. Devin Williams (1-0) earned the win in relief and Josh Hader picked up his eighth save in eight opportunities with a scoreless ninth.

Phillies starter Aaron Nola gave up only one hit and no runs in seven innings. Nola struck out nine and walked one. Closer Corey Knebel (0-1) took the loss. The Phillies managed five hits, and no player had more than one.

The hard-throwing McClanahan (1-1) yielded two runs on six hits while striking out seven without issuing a walk over 86 pitches. Yandy Diaz homered and reached base on a walk and a hit by pitch. Choi went 2-for-2 off the bench with a double and two RBIs.

A member of the Rays’ starting rotation last season with McClanahan, Boston’s Rich Hill — the majors’ older pitcher at 42 — spun four shutout innings and worked out of trouble in the first three. He allowed four hits and three walks with a strikeout.

Byron Buxton homered twice, including a walk-off, three-run blast to lift Minnesota to a win in 10 innings over visiting Chicago in Minneapolis.

Buxton’s 469-foot blast sealed the Twins’ fourth win in a row and completed a three-game sweep over Chicago. Buxton finished with five RBIs while Gio Urshela drove in Minnesota’s other run. Twins right-hander Joe Smith (1-0) earned the win after allowing one unearned run in one inning.

Tim Anderson and Danny Mendick each homered for the White Sox, who lost their seventh in a row. White Sox right-hander Liam Hendriks (0-2) gave up three runs (two earned) on three hits in 1 1/3 innings.

Cody Bellinger drove in four runs with his first two homers of the season and Freddie Freeman got the Dodgers offense rolling with a two-run homer in the third inning as visiting Los Angeles routed San Diego in the rubber match of a three-game series.

The anticipated left-handed pitching duel between Dodgers ace Clayton Kershaw and San Diego’s Sean Manaea failed to materialize as Los Angeles scored seven runs (six earned) on six hits and three walks with five strikeouts in 4 1/3 innings against Manaea (2-2), who had entered the game with a 1.42 ERA.

Meanwhile, Kershaw held the Padres to one run on four hits with three strikeouts over five innings to run his record to 3-0 and lower his ERA to 2.65. Kershaw, however, remains four strikeouts shy of passing Don Sutton (2,696) as the Dodgers’ all-time strikeout leader.

Stephen Piscotty’s two-run home run was all Oakland needed as the Athletics outlasted visiting Texas in the finale of a three-game American League West series.

Cole Irvin (2-1), the first of four Oakland pitchers, allowed just one hit and walked two in five innings of work to earn the win. Irvin struck out four in his 87-pitch stint and allowed the Athletics to salvage the final game of the series.

Texas came into the game on a season-best three-game winning streak but was limited to just four hits and didn’t get a runner to second base until Marcus Semien’s two-out double in the eighth.

Winker also hit a sacrifice fly in the 10th to extend the game after the Royals scored in the top of the inning. The Mariners swept the three-game series and finished 7-2 on their initial homestand of the season to move into first place in the American League West.

The Royals’ Hunter Dozier homered with one out in the top of the ninth inning to tie the score, and both teams scored in the 10th inning.

Joc Pederson went 3-for-3 with two homers and three RBIs as visiting San Francisco completed a three-game sweep of Washington.

Wilmer Flores had three hits and drove in three runs for San Francisco, which broke the game open with six runs in the ninth inning and improved to 7-3 on its 11-game road trip. Logan Webb (2-1) allowed three runs on seven hits over 6 2/3 innings. He walked one and struck out six.

Yadiel Hernandez homered and drove in three runs for Washington, which lost its fifth straight and scored a total of six runs in the series.

Randal Grichuk homered and Charlie Blackmon went 4-for-5 with two RBIs as Colorado won the rubber game of the weekend series against host Detroit.

Chad Kuhl (2-0) checked the Tigers on four hits and a run over six innings, with two walks and four strikeouts. The former Pittsburgh Pirate has permitted just two runs on eight hits in his first 16 1/3 innings with Colorado and sports a 1.10 ERA. Tyler Alexander (0-2) was roughed up for eight hits and five runs over 3 2/3 innings in absorbing the loss.

Grichuk hit a two-run homer to left-center in the top of the third, his first homer with the Rockies. Tucker Barnhart had two hits, including a double, and scored both runs for the Tigers. He scored on singles by Austin Meadows and Robbie Grossman.

Gerrit Cole pitched 6 2/3 stellar innings, DJ LeMahieu fell a triple shy of the cycle and New York rolled to a victory over visiting Cleveland to complete its first series sweep of the season.

Coming off a career-low 1 2/3 innings Tuesday in Detroit, Cole (1-0) allowed four hits and turned in his first scoreless outing since Aug. 27 at Oakland. Cole struck out nine and walked one in a 92-pitch outing as his 47 four-seam fastballs averaged 97.2 mph.

Lodolo (1-2) had seven strikeouts and no walks in earning his first major league victory. The Reds scored three runs in the first two innings against Cardinals starter Adam Wainwright (2-2). He allowed four runs on eight hits with three strikeouts and three walks in five innings.

Rookie shortstop Jeremy Pena crushed a two-run, walk-off home run to straightaway center field in the bottom of the 10th inning as Houston averted a series sweep with a victory over visiting Toronto.

Pena drilled a 96.6 mph fastball from Blue Jays closer Jordan Romano (0-1), who had converted 31 consecutive saves and led the majors with eight this season. Pena drove home Kyle Tucker, the automatic runner, with his third home run this season to counter the run-scoring double Lourdes Gurriel Jr. stroked in the top of the 10th that gave the Blue Jays a 7-6 lead.

Astros starter Luis Garcia was exceptional early, facing the minimum through three innings before the Blue Jays started to apply pressure on him the second time through the order. Blake Taylor (1-1) earned the win on just three pitches and one out in the 10th.

Taylor Ward’s bases-loaded walk in the seventh inning drove in the game-winning run in Los Angeles’ victory over Baltimore in Anaheim, Calif.

Angels left fielder Jo Adell hit a grand slam during a six-run first inning, but the Orioles rallied with three runs in the third and three in the seventh to tie the game at 6-6.

Ward came to the plate in the bottom of the seventh with the bases full and one out to face Baltimore’s hard-throwing reliever Felix Bautista. Ward quickly fell behind in the count 1-2 but fouled off three pitches with two strikes and worked the count full. On the ninth pitch of the at-bat, Ward took a 98-mph fastball out of the zone for ball four to drive in Shohei Ohtani from third.

Tylor Megill continued his strong start to the season, earning the win by allowing two runs over 6 2/3 innings, as New York earned another series win by beating host Arizona in the finale of a three-game set.

Starling Marte built the go-ahead run in the sixth for the Mets, who have won their first five series — tying the franchise record for most consecutive series wins to start a season, set in 2018.

Megill (3-0) gave up five hits and one walk while striking out seven. He retired the first eight batters he faced and came within one out of matching his career-long outing, set against the New York Yankees last Sept. 10.

Kevin Newman had two hits, including an RBI double, and David Bednar struck out Frank Schwindel with two outs and the bases loaded in the bottom of the ninth as Pittsburgh held off host Chicago.

Ke’Bryan Hayes also had an RBI double for Pittsburgh, which bounced back from a 21-0 loss on Saturday afternoon to win the series with its third win in four games. Dillon Peters (3-0) allowed one hit over 2 2/3 scoreless innings of relief to pick up the win. Bednar recorded his second save of the season.

Ian Happ homered, Rafeal Ortega doubled twice and Schwindel went 2-for-5 with an RBI to lead Chicago, which lost for the fifth time in six games. Justin Steele (1-2) took the loss, allowing three runs on four hits over three innings. He walked four and struck out two.

Jesus Luzardo pitched five strong innings and Garrett Cooper drove in a pair of runs to help visiting Miami defeat Atlanta and win the rubber game of a three-game series.

Luzardo (1-1) allowed one run on two hits, four walks and eight strikeouts to record his first career win against Atlanta.

The bullpen supported Luzardo with three scoreless innings — Cody Poteet (one inning), Richard Bleier (one-third of an inning) and Anthony Bass (1 2/3 innings). An important moment came in the seventh when Bass entered with the bases loaded and one out and got Austin Riley to hit into an inning-ending double play.