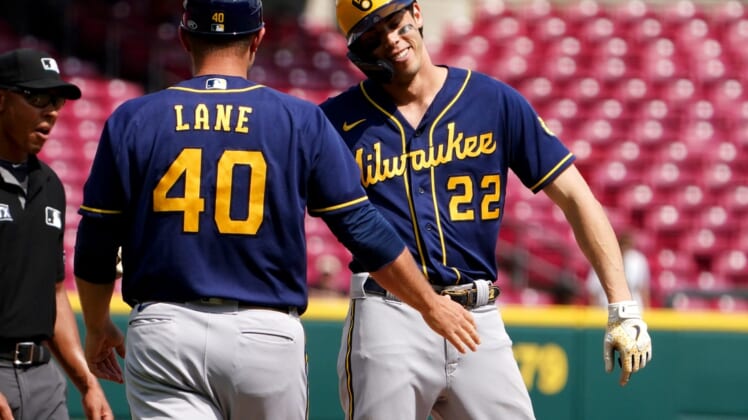 Tyler Stephenson doubled twice in the first two innings and drove in four runs to power the Cincinnati Reds past the visiting Milwaukee Brewers 14-11 Wednesday afternoon.

Christian Yelich became the fifth player since 1900 with three career cycles when he tripled in Milwaukee’s six-run ninth. All three have been at the expense of the Reds. Hunter Renfroe also homered twice for the Brewers, who fell to 2-4 on their current nine-game road trip.

Trailing 14-5 entering the ninth, the NL Central-leading Brewers fell short of the biggest comeback in franchise history. The rubber-game win gave Cincinnati its second straight series win after going winless in its first eight of the season.

Colin Moran homered for the fourth time in four games and drove in three while Tyler Naquin went 2-for-4 and also had three RBIs for the Reds, who received a much-needed cushion with a six-run eighth.

Brewers starter and loser Adrian Houser (3-3) was victimized by shoddy fielding in the first inning as the Reds raced out to a 3-0 lead.

Daniel Vogelbach’s tiebreaking solo homer in the seventh inning helped Pittsburgh to a win over visiting Los Angeles and a series win.

Josh VanMeter added a two-run homer and tripled and scored, and Jack Suwinski hit a solo homer for the Pirates.

Pittsburgh starter Dillon Peters, making his 10th appearance and third start, was essentially used as an opener. He cruised through three scoreless innings, giving up two hits and striking out two with no walks. David Bednar struck out three during a six-out save, his fifth.

Hoskins homered in all three games of the series. He hit solo shots in a 9-0 victory Monday and a 5-4 loss Tuesday. The Phillies won for just the third time in their past nine games. Seattle took its 12th loss in the past 15 contests.

Seranthony Dominguez (2-1) pitched 1 1/3 scoreless innings in relief for the win. Corey Knebel got the final four outs for his sixth save. Ty France had two hits and an RBI for the Mariners.

Gleyber Torres hit a three-run homer and drove in five runs as host New York beat Toronto for the sixth time in nine meetings this season.

Torres’ homer landed in the front row of the right field seats just over right fielder Teoscar Hernandez’s leaping try in the fourth off Jose Berrios (2-2). Torres added a two-run single to center in the sixth off Trevor Richards as the Yankees won for the 15th time in 17 games.

Bo Bichette had three hits, but the Blue Jays scored their runs on outs and lost for the fourth consecutive game and ninth time in 14 games.

Jazz Chisholm Jr. and Avisail Garcia each hit three-run home runs during an eight-run ninth inning as visiting Miami avoided a three-game sweep with a victory over Arizona at Phoenix.

The Diamondbacks tied the game at 3-3 on pinch hitter Jordan Luplow’s two-run homer in the eighth inning before the Marlins sent 12 batters to the plate and pounded out eight runs on eight hits in the ninth.

Joey Wendle also hit a home run for Miami, which snapped a three-game losing skid and won for just the second time in its last 11 games. Alek Thomas hit his first career home run for Arizona, which was outhit 15-4 and saw its three-game winning streak come to an end.

In a duel of teams that were tied in the standings at the beginning of the week, the Giants used 8-5, 9-2 and 7-1 wins to run their winning streak to five games, effectively soothing the sting of a five-game losing streak that immediately preceded the run of success.

For the third straight day, the Giants never trailed, taking the lead for good with a three-run fourth inning off Rockies starter Chad Kuhl (3-1). Crawford had his first RBI in the inning with an infield out, before Joey Bart added an RBI single and Brandon Belt made it 3-0 with a sacrifice fly.

Paul Goldschmidt drove in three runs as St. Louis rolled to a victory over visiting Baltimore to snap a three-game losing streak.

Goldschmidt went 2-for-3 with double and a walk to extend his on-base streak to 18 games. Brendan Donovan had two doubles, two walks, two RBIs and three runs. Cardinals starting pitcher Miles Mikolas (3-1) worked seven innings and allowed one run on four hits and a walk.

For his father’s birthday, Bobby Witt Jr. delivered a two-run double and three RBIs for Kansas City in a win against Texas in Arlington, Texas.

Kolby Allard (0-2), called up earlier in the day from Triple-A Round Rock, took the loss in relief, allowing one run in three innings.

Alfonso Rivas hit a tiebreaking, two-run single in the eighth inning, leading visiting Chicago to a victory over San Diego in the rubber match of a three-game series.

Mychal Givens (2-0) was credited with the win despite allowing solo homers to Eric Hosmer and Luke Voit in his lone inning. Rowan Wick worked two scoreless innings to earn his second save as the Cubs won only their second series of the season.

Voit homered twice, and he and Hosmer finished with three hits apiece.

Vidal Brujan doubled home the go-ahead run in the 10th inning as Tampa Bay salvaged the finale of its three-game series against host Los Angeles.

The Rays scored two runs in the 10th off Aaron Loup (0-2). Brujan’s leadoff double scored automatic runner Kevin Kiermaier from second base. Brujan then stole third base and came home on Harold Ramirez’s single to center.

Los Angeles trailed 2-0 with one out in the eighth before tying the game on pinch hitter Taylor Ward’s two-run homer off Andrew Kittredge. J.P. Feyereisen (3-0) pitched a scoreless ninth inning for the win. The Angels had runners on the corners with two outs in the 10th before Brooks Raley struck out Brandon Marsh for his third save.

Logue (1-0) held the Tigers to five hits and no walks while striking out six. He earned his first major league victory in his second career start and third appearance. Oakland’s Christian Bethancourt had three hits, two runs and two RBIs, while Ramon Laureano walked twice, doubled, scored twice and drove in a run.

Sam Moll and Justin Grimm each pitched a scoreless inning to complete the shutout for the A’s, who have won three of the first four games in the five-game series that wraps up Thursday. The Tigers have lost eight of their past nine games, and have not scored more than two runs in any of those defeats.

Juan Soto and Nelson Cruz homered to provide the bookends in an eight-run outburst over the first two innings against Tylor Megill as host Washington beat New York.

The win was the second in the last seven games for the Nationals. The Mets need a win in Thursday’s series finale to remain unbeaten in series this season (8-0-1).

The eight runs allowed were a career high for Megill, whose ERA rose to 4.41. He is the 11th pitcher this season to allow at least eight runs in a start.

Orlando Arcia hit a two-run walk-off homer to give Atlanta a win over visiting Boston to earn a split of their two-game series.

Ozzie Albies led off the ninth against Red Sox reliever Ryan Brasier by poking a single to left field. After Adam Duvall flied out, Arcia delivered his first homer of the season into the left-field stands. It was his first homer since June 22, 2021 against Philadelphia and the first walk-off homer of his career.

The winning pitcher was Kenley Jansen (1-0), who worked around a walk to pitch a scoreless ninth inning. It was his first win as a Brave. Brasier (0-1) took the loss.

A wave of heavy thunderstorms in Minneapolis forced the game between Houston and Minnesota to be suspended.

The teams will pick up where they left off, with the Astros leading 5-1 entering the top of the fourth inning, as part of a doubleheader Thursday afternoon. They will play the second game approximately 30 minutes after the conclusion of the first game.

Before storms arrived, prompting tornado sirens to go off near Target Field and across the Twin Cities region, the Astros built a comfortable lead.