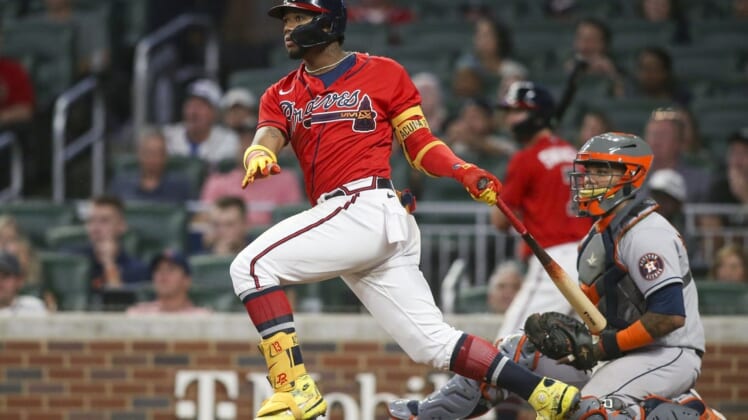 Austin Riley hit a three-run homer Friday night for the surging Atlanta Braves, who beat the visiting Houston Astros 6-2 in the first game between the clubs since last October’s World Series.

The Braves, who defeated the Astros in six games last year to clinch their first title since 1995, have won 10 of their past 11 games. The Astros lost for just the third time in nine games.

Houston’s Lance McCullers Jr. (1-1) gave up three runs in five innings. Astros left fielder Yordan Alvarez left the game in the bottom of the fifth inning because he was feeling ill. The team announced that he was taken to a hospital to be evaluated.

Triston McKenzie recorded a career-high 14 strikeouts and Amed Rosario had a go-ahead RBI single in the seventh inning, fueling host Cleveland past Chicago.

McKenzie (9-9) allowed two runs on six hits in seven innings. Jose Ramirez belted a solo homer and rookie Steven Kwan had an RBI triple and scored on Rosario’s single. Andres Gimenez added a two-run single for the Guardians, who have won 10 of their last 13 games.

Jose Abreu and Yoan Moncada each had an RBI single in the first inning for the White Sox, who have lost three in a row following a five-game winning streak.

Sandoval (4-8) held Detroit to four hits and didn’t walk a batter for the first time in 20 starts this season. He notched nine strikeouts and required only 97 pitches to finish his gem. Manning (0-1) allowed three hits and one walk while striking out six in seven innings.

Jared Walsh’s second-inning home run held up as the game-winning blow. Perennial All-Star Mike Trout was activated from the injured list (back) and played for the first time since July 12. He went 1-for-4 with two strikeouts.

Anthony Santander and Adley Rutschman each delivered home runs among their three hits to help Baltimore to a victory over visiting Boston.

Wynton Bernard added two hits for the Rockies, who snapped a five-game losing streak. Jose Urena tossed 6 2/3 effective innings for the win, and Daniel Bard struck out three in the ninth for his 25th save.

Joc Pederson homered among his two hits for the Giants, who have lost three straight.

Bobby Witt Jr. hit a two-run homer for the Royals in the third inning. The Rays’ Randy Arozarena responded with a two-run single in the sixth.

Scott Barlow (5-4) tossed two scoreless innings and struck out two for the win. Jalen Beeks (2-3) lost for the second time in three days, both in extra innings.

Rookie Christopher Morel hit a go-ahead, two-run homer in the sixth inning to lift host Chicago to a win over Milwaukee.

Michael Rucker (2-1), Mark Leiter Jr. and Brandon Hughes didn’t yield a run over the final three innings as Chicago won its fourth straight game. Rucker retired all three batters he faced, Leiter fanned all three he encountered and Hughes worked around one hit to pick up his second save.

Eugenio Suarez bombed two- and three-run home runs and Marco Gonzales beat Oakland for the third time this season as Seattle routed the A’s to open a three-game road series.

Oakland designated hitter Shea Langeliers had a sacrifice fly in his home debut. Chad Pinder had two hits for the A’s, who lost for the 11th time in 13 games.

The big blow was a two-run homer by Alex Call, the first long ball of his career. Since the Padres acquired the four-time All-Star from the Milwaukee Brewers, Hader (2-5) is 1-1 with a blown save and a 16.20 ERA.

Erasmo Ramirez (4-1) threw one scoreless inning for the win. Kyle Finnegan tossed a 1-2-3 ninth for his second save in as many nights against the Padres, his seventh of the season.

Mookie Betts led off the eighth inning with a triple and scored the go-ahead run on a Will Smith ground ball as Los Angeles pulled off a victory over visiting Miami.

Trayce Thompson also drove in a run and Evan Phillips earned his second save as the Dodgers returned from a 4-3 road trip to win their seventh consecutive home game.

It was a battle of left-handers as the Dodgers’ Tyler Anderson gave up one run on five hits over seven innings while the Marlins’ Jesus Luzardo allowed one run on four hits over 6 1/3 innings. Luzardo’s innings total and pitch total (100) were season highs.

Francisco Lindor contributed three hits and Starling Marte had two for the Mets, who had lost three of four games to the Atlanta Braves to start the week. New York starter Chris Bassitt (11-7) tossed six innings and gave up seven hits and two runs.

After struggling with a strained right calf, Kyle Schwarber returned to the Phillies’ starting lineup and had two singles and two RBIs. Aaron Nola (8-10) allowed eight hits and five runs to go along with nine strikeouts and one walk in five innings.

The Blue Jays moved within eight games of the Yankees by winning their third straight game. It is Toronto’s closest deficit in the division since it was eight back on June 13.

Mikolas (10-9) gave up one run and two hits. The Cardinals’ Yadier Molina had his first three-hit game of the season to move into fifth place among primary catchers with 2,152 career hits. Molina passed New York Yankees legend Yogi Berra (2,150).

Josh Rojas had two hits for the Diamondbacks, who lost for just the fifth time in the past 13 games.

Luis Arraez and Jose Miranda hit back-to-back homers in the first inning to lead Minnesota to its fourth straight victory in the opener of a four-game series with Texas in Minneapolis.

Dylan Bundy (7-5) allowed one run on two hits over 5 1/3 innings to pick up the win for the Twins, who remained one game behind Cleveland in the AL Central race. Jorge Lopez pitched around two walks in the ninth to pick up his 22nd save.

Nathaniel Lowe had an RBI and Bubba Thompson stole a base and scored a run for Texas. Adolis Garcia also had a single to extend his career-best hitting streak to 16 games for the Rangers. Martin Perez (9-4) settled down after allowing the two homers. In six innings, he allowed two runs on five hits.

Michael Chavis’ walk-off single capped a two-run rally in the ninth inning that gave host Pittsburgh the win over Cincinnati.

With Cincinnati up 4-3 entering the bottom of the ninth, Bligh Madris led off with a single against Joel Kuhnel (2-2). After a bunt moved the runner to second, Kevin Newman hit a game-tying double. Ross Detwiler replaced Kuhnel and intentionally walked Bryan Reynolds, then hit Ben Gamel with a pitch to load the bases and set up Chavis’ heroics.

Wil Crowe (5-7) served up Farmer’s go-ahead hit, letting in an inherited runner, but he got the win after tossing 1 1/3 scoreless innings. Nick Senzel and TJ Friedl hit home runs for the Reds.