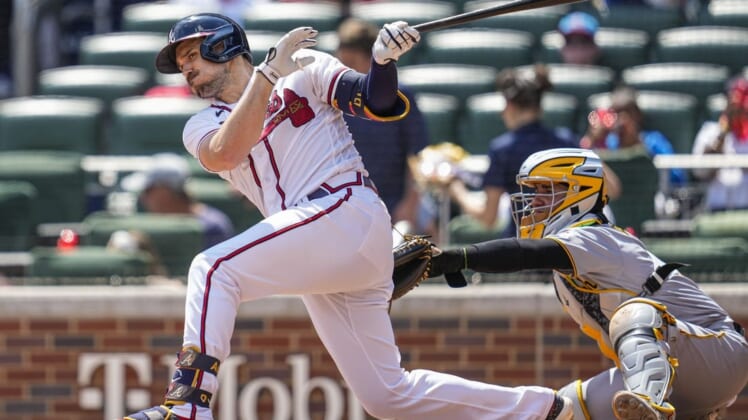 William Contreras and Adam Duvall, the No. 7 and 8 hitters in the Atlanta batting order, combined for three home runs to lead the Braves to their 11th straight win, a 5-3 victory over the visiting Pittsburgh Pirates on Sunday.

The Braves had not won 11 in a row since 2013, when they had a 14-game streak. They matched the Houston Astros and the New York Yankees for the majors’ longest winning streak and moved to a season-high seven games over .500.

The Braves swept the four-game series, the first time they’ve done that against the Pirates since 2019.

Contreras was 2-for-4 with a double and a home run, scored two runs and drove in a run. Duvall went 2-for-3 with two homers — his 11th career multi-homer game — and three RBIs.

Matt Carpenter homered twice and tied a career-high with seven RBIs as New York easily extended its home winning streak to 11 games in a rout of skidding Chicago at Yankee Stadium.

Carpenter walked with the bases loaded in New York’s five-run first off Chicago starter Keegan Thompson (6-2), hit a three-run homer in the second off Daniel Norris and added a two-run drive in the sixth off Alec Mills before finishing with an RBI double in the seventh.

Cal Quantrill gave up one run over six innings and Jose Ramirez drove in three runs as Cleveland rolled to a victory over visiting Oakland.

Quantrill (4-3) allowed one run and two walks with four strikeouts as he pitched at least six innings in his ninth consecutive start. The only run he allowed came on the second batter of the game when Oakland’s Ramon Laureano hit a home run.

The Guardians won three of four games to take their fourth consecutive series, while winning for the 10th time in their last 13 games.

Josh Rojas added two hits, three runs and an RBI, while Alek Thomas had two singles and two RBIs for the Diamondbacks, who avoided a three-game sweep. Ketel Marte chipped in with a two-run single, and Geraldo Perdomo had two hits.

The Phillies had their nine-game winning streak snapped and interim manager Rob Thomson lost for the first time after starting 8-0.

Lourdes Gurriel Jr. had two hits and drove in three runs for Toronto, which took two of three games in the weekend series. Cavan Biggio added two hits and an RBI.

Robbie Grossman’s third-inning single was the only hit allowed by Stripling (3-1), who didn’t issue a walk while recording four strikeouts. Detroit starter Tarik Skubal (5-3) matched his shortest outing of the season. Skubal allowed four runs and seven hits while striking out five in four innings.

Left-hander Carlos Rodon (5-4) combined with three relievers on a five-hitter. Rodon gave up two hits and three walks, and struck out eight. The Giants completed their first three-game home sweep of their Southern California rival since the final three games of the 2016 regular season.

Urias (3-6) went six innings, allowing no more runs and only one hit after the first three batters of the game. He struck out 10 and did not issue a walk.

Willy Adames drove in three runs with a double and a home run as Milwaukee halted an eight-game losing streak by beating host Washington.

The Nationals were denied what would have been their first series sweep of the season after slugging seven home runs across the first two games of the homestand.

TJ Friedl drove in two runs with a single and a triple as visiting Cincinnati defeated St. Louis to avoid a three-game sweep.

Jonah Heim lined a go-ahead, two-run single in the 12th inning and Ezequiel Duran and Eli White each had a home run and three RBIs as visiting Texas topped Chicago.

Texas took two of three to earn a series victory for the first time since winning three of four at Oakland from May 26-29. Chicago, meanwhile, lost for the fourth time in five games in a contest that saw both teams lose players to injury.

A violent collision between White and fellow Rangers outfielder Charlie Culberson occurred in the 11th inning. White left the game favoring his right arm and hand. Chicago starter Michael Kopech exited the game with right knee discomfort after 13 pitches and two-thirds of an inning. The right-hander winced after throwing a called strike to Adolis Garcia.

Justin Verlander took over the major league lead in victories and Houston salvaged the finale of a three-game interleague series against visiting Miami.

One start after recording a season-high 12 strikeouts, Verlander (8-2) allowed three hits and one walk with five strikeouts over seven innings. He retired the first 10 batters he faced before Marlins shortstop Miguel Rojas hit a one-out single in the fourth inning. Verlander then retired eight of the next nine batters.

The Marlins had their five-game winning streak snapped. Houston went 2-4 on its six-game homestand, with Verlander recording both victories.

Cedric Mullins went 4-for-6 with two RBIs and a run. Richie Martin went 3-for-5 with two triples, two RBIs and three runs, while Austin Hays went 3-for-5 and drove in two runs. Kremer (1-1) allowed four hits to go along with two strikeouts and two walks. He was charged with two runs, one earned.

Hunter Dozier went 4-for-5, including a two-run homer and a double, with two runs and two RBIs for the Royals, and Bobby Witt Jr. went 3-for-5 with two runs and an RBI. He also homered. Right-hander Brad Keller fell to 1-8 after allowing five runs on seven hits with four strikeouts and a walk in 1 2/3 innings.

Ryan McMahon hit a tiebreaking, two-run, two-out double inside the first-base bag in the top of the eighth inning to lead visiting Colorado to a win over San Diego and a split of the four-game weekend series.

The two-run eighth gave the win to Rockies struggling ace German Marquez (3-5), who gave up two runs on six hits and no walks with six strikeouts over six innings in his sharpest outing since April 9.

In taking the final two games of the series, the Rockies won back-to-back games for the first time in 36 games since May 4-5.

Kevin Kiermaier went 2-for-4 with a homer and two RBIs and Jeffrey Springs pitched 5 1/3 shutout innings to lead Tampa Bay to a victory over Minnesota in Minneapolis.

Randy Arozarena had an RBI double and reached base three times, stole two bases and scored twice. Ji-Man Choi extended his hitting streak to 11 games with two hits and an RBI for the Rays, who snapped a two-game losing streak.

Relievers Matt Wisler, Jalen Beeks, Calvin Faucher and Colin Poche combined to hold Minnesota — which had scored 30 runs and clubbed 11 homers in its four previous games — to just three more singles over the final 3 2/3 innings to complete the shutout.

Rafael Devers hit a two-run home run in the eighth inning and six pitchers combined on a one-hitter as Boston blanked host Seattle to take two of three games in the series.

With two outs in the eighth, Rob Refsnyder barely checked his swing on a two-strike pitch from Paul Sewald (3-2). The next pitch hit Refsnyder. Sewald got ahead 0-2 in the count to Devers, then threw a pitch up and away that the lefty hitting Devers poked just over the left-field wall for his 14th home run of the season.

Right-hander Tyler Danish (2-0) retired the only batter he faced, and Tanner Houck pitched a 1-2-3 ninth for his second save of the season — both in this series. Red Sox right-hander Kutter Crawford, in his second major league start, pitched five scoreless innings, allowing just one hit. He walked four and struck out seven.

Taijuan Walker struck out a season-high 10 batters and Pete Alonso and J.D. Davis each belted a solo homer to fuel New York to a victory over Los Angeles in Anaheim, Calif.

Walker (4-2), who entered the game with just 25 strikeouts over 46 2/3 innings, allowed one run on six hits in six innings to snap a modest two-start losing skid on Sunday. Seth Lugo bridged the gap to Edwin Diaz, who struck out five batters to highlight his five-out save.

Mike Trout had an RBI single in the first inning and Brandon Marsh and Matt Duffy each had two hits for the Angels, who have lost 16 of their last 18 games.