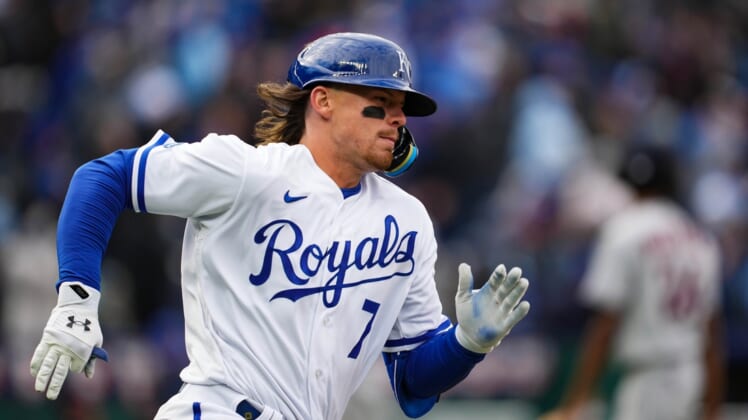 Bobby Witt Jr. made his major league debut even more memorable with a two-out, go-ahead double in the bottom of the eighth as the Royals defeated the Cleveland Guardians 3-1 on a cold, blustery Opening Day Thursday in Kansas City.

Michael A. Taylor led off the eighth inning with a walk and Nicky Lopez bunted Taylor to second. After Whit Merrifield struck out, Witt pulled a hanging slider into left field to drive in Taylor with the go-ahead run. Witt then scored an insurance run on a single up the middle by Andrew Benintendi.

Scott Barlow picked up the win for the Royals with two scoreless innings. Triston McKenzie took the loss despite three solid innings of relief for the Guardians.

The Indians got on the board first in the fourth inning when Jose Ramirez drove in Myles Straw with a double to short left-center field. The Royals responded in the fifth when Nicky Lopez drove in Hunter Dozier with a two-out drive to left center.

Los Angeles superstar Shohei Ohtani made history, but it was Framber Valdez who stole the show while leading Houston over the Angels in Anaheim, Calif.

Ohtani, the defending American League MVP, became the first player in major league history to make his team’s first pitch of the season and also lead off. Ohtani made 80 pitches in 4 2/3 innings, allowing only a two-out RBI single by Alex Bregman in the third inning. He struck out nine, the most by an Angels starter on Opening Day since Jered Weaver struck out 10 in 2012.

Valdez threw 6 2/3 scoreless innings while allowing just two hits. He struck out six and walked one. Bregman and Yordan Alvarez hit back-to-back homers to begin the eighth against Ryan Tepera. David Fletcher’s RBI triple in the bottom of the inning accounted for the Angels’ only run of the game.

Seth Beer smacked a three-run homer with no outs in the bottom of the ninth inning to give Arizona a dramatic victory over San Diego in Phoenix.

The Diamondbacks had just two hits entering the inning and needed only one during the four-run uprising. Two walks, a hit by pitch and a run-scoring wild pitch preceded Beer’s second career homer, a 386-foot blast off Craig Stammen (0-1).

San Diego reliever Robert Suarez made his major league debut to start the ninth and walked Christian Walker and Pavin Smith, then plunked Carson Kelly with a pitch before being lifted. Stammen’s first pitch to Beer was wild, allowing Walker to score. His next pitch went soaring over the right-field wall. Joe Mantiply (1-0) pitched a scoreless top of the ninth for the win.

Ian Happ finished with three hits, including the tiebreaking, two-run double in the seventh inning that sparked host Chicago to a win over Milwaukee.

Jason Heyward had two hits for the Cubs while Seiya Suzuki, making his U.S. debut after nine seasons as a star in his native Japan, went 1-for-2 with two walks. Chris Martin (1-0) earned the win despite blowing a seventh-inning lead. David Robertson earned the save by working around a hit in the ninth.

Lorenzo Cain drove in two runs while Willy Adames, Rowdy Tellez and Andrew McCutchen had two hits each for the Brewers.

Tyler O’Neill hit a three-run home run and drove in five runs to power St. Louis to a win over visiting Pittsburgh.

Pirates third baseman Ke’Bryan Hayes left in the first inning after he tried to make a diving catch on Dylan Carlson’s wind-whipped pop-up double down the left-field line. Hayes, who agreed to a reported eight-year, $70 million extension before the game, missed time last season with a left wrist injury.

For the first time since 1990, Cincinnati opened the season on the road, and the Reds defeated defending World Series champion Atlanta.

Newcomer Brandon Drury connected for a three-run homer in support of starter Tyler Mahle (1-0), who limited the Braves to three hits and one unearned run over five innings. Tony Santillan pitched a perfect ninth inning to record his first career save.

With ace Jacob deGrom on the injured list and Max Scherzer’s debut with the Mets pushed back to Friday, Megill stepped in and allowed three hits and no walks while striking out six. Four Mets had two hits each among 12 for the team.

Juan Soto homered for the Nationals, and Keibert Ruiz had two hits, including a double. Washington starter Patrick Corbin (0-1) gave up two runs on five hits in four-plus innings.