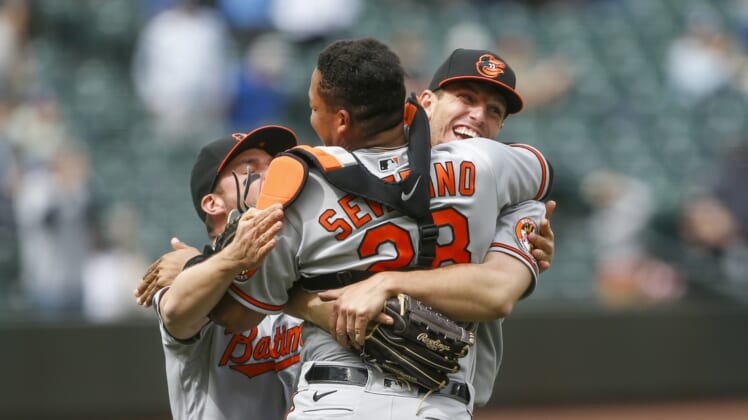 John Means pitched Baltimore’s first no-hitter in 30 years and the organization’s first no-hitter by a lone pitcher since Jim Palmer in 1969, and the Orioles defeated the host Seattle Mariners 6-0 Wednesday afternoon.

Means (4-0) faced 27 batters but was not quite perfect in matching his career-high with 12 strikeouts. Pat Valaika and Trey Mancini homered for Baltimore, which took two of three games in the series.

The only baserunner Means allowed came on a strikeout. With one out in the third inning, Seattle’s Sam Haggerty swung and missed on a 1-2 pitch low and in the dirt. The ball went all the way to the backstop, allowing Haggerty to reach first base without a throw on the wild pitch.

Haggerty was erased on the bases when he was caught stealing.

Anthony Rizzo hit a walk-off single in the bottom of the 11th inning to lift Chicago past visiting Los Angeles, giving the Cubs a three-game sweep.

Matt Beaty gave the Dodgers a 5-4 lead in the top of the 11th on a fielder’s choice groundout. Duffy’s RBI single tied the score at 5 in the bottom of the frame, and he came around to score the winning run on Rizzo’s single.

Giancarlo Stanton continued his tear with three more hits and drove in four runs as New York beat Houston in front of another loud, limited-capacity crowd at Yankee Stadium.

Stanton drove in four runs for the second straight night to extend his hitting streak to 11 games. He accounted for New York’s first three runs with a two-run homer in the third inning and a game-tying double in the fifth.

Didi Gregorius hit a grand slam in the first inning and host Philadelphia held on to top Milwaukee. The Phillies won their third in a row and will have a chance at a four-game sweep on Thursday.

Phillies starter Chase Anderson lasted 4 1/3 innings and gave up four hits and three runs. Anderson struck out two but struggled with his command and walked four.

Brandon Kintzler (2-1) earned the win in relief while Jose Alvarado returned from a two-game suspension to pick up his second save in two opportunities by tossing a scoreless ninth inning. Alvarado struck out Travis Shaw swinging with Lorenzo Cain on second to end the game.

Teoscar Hernandez hit his second RBI single of the game to score the go-ahead run in a five-run eighth inning and Toronto went on to defeat host Oakland.

Randal Grichuk also had two RBI singles in going 3-for-5 for Toronto, and Vladimir Guerrero Jr. hit a two-run double. Ramon Laureano had three hits, including a solo homer, and Matt Chapman hit a solo homer for Oakland.

Jesse Winker singled home the winning run in the 10th inning and Cincinnati beat visiting Chicago in a game highlighted by a pitcher’s duel between Sonny Gray and Dallas Keuchel.

With Cincinnati’s Tucker Barnhart placed on second to start the 10th, Nick Senzel singled to left off Chicago right-hander Liam Hendriks. Winker, who worked the count to 2-2, followed with a laser to right-center field that allowed the Reds to split the two-game set.

Reds right-hander Gray (who lowered his ERA to 3.92) and Chicago left-hander Keuchel (3.79) more than held their own. Each allowed two hits and both set season highs by completing seven innings.

Jeimer Candelario hit a three-run homer in the 10th inning and visiting Detroit snapped a six-game losing streak by holding off Boston.

Michael Fulmer, who started Tuesday’s series opener, staved off the Red Sox’s final rally by getting the last two outs for his first career save. Gregory Soto (2-1) was credited with the win.

Colorado scored all six of its runs in the fourth inning and then held on to beat San Francisco in Denver and take two out of three games in the series.

Charlie Blackmon doubled twice and drove in two runs for the Rockies, and starting pitcher Jon Gray (4-2) struck out eight in six innings. He allowed two runs on four hits with two walks.

Brandon Crawford homered and drove in two runs for the Giants, and Darin Ruf added a solo shot. San Francisco starter Logan Webb (1-3) gave up all six runs on three hits and three walks in 3 2/3 innings. He struck out five.

Fried (1-1), who left his last start with a strained hamstring, allowed a run on four hits. He struck out six and walked one. Will Smith, the Braves’ sixth pitcher, worked a scoreless ninth inning for his sixth save.

Paul DeJong hit a two-run homer as St. Louis beat visiting New York in the first game of a doubleheader.

Paul Goldschmidt also hit a home run for the Cardinals, who won their sixth straight game and their 10th in their past 12 games. Cardinals starting pitcher Kwang Hyun Kim allowed one run on two hits and three walks in four innings.

Reliever Ryan Helsley (3-0) blanked the Mets in the fifth inning to earn the victory and Alex Reyes, the fourth Cardinals pitcher, closed out the game for his ninth save.

Tomas Nido, Kevin Pillar and Jonathan Villar drove in two runs each to power New York past St. Louis in the second game of their doubleheader.

Jordan Yamamoto (1-0), the Mets’ second pitcher after Miguel Castro was used as a one-inning opener, earned the victory. He allowed one run on four hits with no walks and one strikeout in 2 2/3 innings.

The result ended the Cardinals’ six-game winning streak, with Johan Oviedo (0-1) taking the loss. He gave up four runs on five hits in four innings with two strikeouts and no walks.

Josh Naylor’s leadoff home run in the top of the ninth inning lifted the Indians to a victory at Kansas City, Cleveland’s third consecutive win to start the four-game series.

The Indians rallied from a 4-0 deficit after five innings. They have come from behind in all three of the wins.

Nick Wittgren (2-1) picked up the win after he struck out the side in the eighth inning. James Karinchak earned his third save in four tries. Wade Davis (0-1) took the loss after serving up Naylor’s homer.

Jake Cronenworth broke a tie with a sharp single to right field in the sixth inning to lead San Diego over visiting Pittsburgh in the rubber match of a three-game series. Cronenworth entered the game in a 7-for-46 (.152) slump.

Padres relievers Craig Stammen (2-1), Tim Hill, Emilio Pagan and Mark Melancon retired 10 of the 11 Pirates they faced after Pittsburgh tied the game in the top of the sixth against Yu Darvish. Melancon got his 11th save in as many chances.

Brandon Lowe clubbed a go-ahead three-run homer in the seventh inning, and Tampa Bay won its fourth in a row, beating Los Angeles in Anaheim, Calif.

After failing to take advantage of six walks issued by Los Angeles star Shohei Ohtani (five scoreless innings), the Rays finally broke through off reliever Junior Guerra in the seventh.

With the Rays trailing 1-0, Brett Phillips opened the inning with a walk and Willy Adames followed with a single. Lowe then drove the ball well over the center field fence for his fifth home run of the season.

Adam Duvall hammered a three-run homer and Jordan Holloway earned his first major league win, leading Miami to a win over Arizona. Six of the Marlins’ runs were scored on hits with two outs.

Holloway (1-0) pitched three scoreless innings in relief, teaming with four other pitchers for a five-hit shutout. Duvall went 2-for-4 with four RBIs, and Miguel Rojas finished 2-for-3 with three runs, two RBIs, a triple and a double.

Texas left-hander Hyeon-Jong Yang struck out eight batters over 3 1/3 innings in his first major league start as the Rangers beat Minnesota in Minneapolis.

Nate Lowe had two hits for the Rangers, who won for the sixth time in their past nine games. John King (3-1) pitched 2 2/3 innings of scoreless relief for the victory. Ian Kennedy struck out three in the ninth inning for his ninth save.