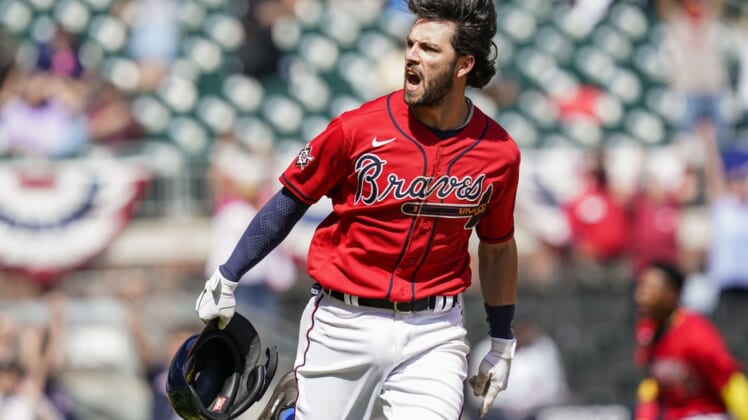 Dansby Swanson lined the first pitch he saw into left field to complete a two-run rally and give the Atlanta Braves a 7-6 win over the visiting Miami Marlins on Thursday, breaking a four-game losing streak.

The Braves loaded the bases against Dylan Floro (0-1) on back-to-back singles by Ender Inciarte and Ronald Acuna Jr. and a 10-pitch walk to Freddie Freeman. An Ozzie Albies walk forced in the tying run, and Swanson ended it with his third hit of the game.

The Marlins had taken the lead in the top of the ninth against A.J. Minter. Miguel Rojas walked to lead off the inning and scored on pinch hitter Adam Duvall’s double to right. Two outs later, Garrett Cooper lined a single up the middle just out of the reach of shortstop Swanson.

Minter (1-0) got the win despite allowing two runs in his lone inning.

Manny Machado had a homer and three RBIs and Jake Cronenworth and Eric Hosmer each drove in two runs as visiting San Diego defeated Pittsburgh.

The win gave the Padres a split of their four-game series in Pittsburgh to complete a 5-2 road trip as they head home for a weekend series against the Los Angeles Dodgers.

Chris Paddack (1-1) allowed three runs (one earned) over five innings to earn the win. He walked two and struck out four. Craig Stammen worked three scoreless innings, allowing three hits with two strikeouts, to pick up his first save.

Turner had three hits as the Dodgers improved to 6-0 at home. Jimmy Nelson (1-1) pitched a perfect seventh inning to earn the victory. David Price allowed two singles to open the ninth inning but escaped the jam for his first career regular-season save.

Ryan McMahon and Garrett Hampson hit home runs for the Rockies, who saw their losing streak extend to six games. Colorado is winless in six tries on the road. In his third start with the Rockies, Austin Gomber yielded three runs on six hits over six innings with two walks and seven strikeouts.

Civale (3-0) limited Chicago to one run on five hits with two walks and four strikeouts. Three pitchers combined on three innings of three-hit relief, with Emmanuel Clase pitching around a Luis Robert triple and an unearned run in the ninth to record his third save.

J.P. Crawford’s two-run double broke a tie as Seattle rallied to defeat host Baltimore in the first game of a doubleheader.

Mariners starter Marco Gonzales (1-1) overcame a shaky first inning to get the victory. Gonzales allowed two runs on three hits in five innings, with two walks and five strikeouts. Kendall Graveman retired the side in order in the seventh for his second save. Mitch Haniger also homered for Seattle.

Trey Mancini left the yard for the Orioles in the loss.

Mitch Haniger and Dylan Moore both hit solo shots for the Mariners to help power them to victory.

Freddy Galvis cracked a solo homer for the Orioles.

Max Kepler blooped a single to center to drive in Luis Arraez from second base in the bottom of the ninth inning as Minnesota snapped Boston’s nine-game winning streak.

Kepler, who was 0-for-11 in the series before his game-winning RBI, drove in Minnesota’s first ninth-inning run of the season as the Twins snapped a five-game losing streak. Arraez went 4-for-5 with two RBIs, the third four-hit game of his career.

Alex Colome (1-1) picked up the win in relief. Minnesota got seven shutout innings from starter Michael Pineda, who faced just two batters over the minimum and retired 14 in a row after allowing a leadoff single to Enrique Hernandez.

Junis (1-0) allowed two runs on five hits. He walked one and struck out six. He has given up two runs in 12 innings this season. Jorge Soler, Hunter Dozier, Hanser Alberto and Nicky Lopez each had two hits for the Royals.

Toronto’s Bo Bichette saw his 11-game hitting streak end, going 0-for-4 with a walk. Vladimir Guerrero Jr. went 3-for-5 with a home run.

The Rangers took their fourth lead of the night when Garcia rocketed a two-run, opposite-field homer to right. The shot off Cody Reed (0-1), the Rays’ sixth pitcher, also scored Jose Trevino, who was placed on second with the extra-innings rule.

Josh Sborz (1-0) posted his first career win with a scoreless ninth inning, and Ian Kennedy collected his third save with a perfect 10th inning.

Sean Manaea struck out seven in six strong innings as Oakland opened a four-game series against visiting Detroit with its fifth win in a row.

Matt Chapman provided a two-RBI double while Stephen Piscotty and Matt Olson belted solo home runs for the A’s. Manaea (1-1) limited the Tigers to two runs on five hits and no walks.

Niko Goodrum had three hits, including his first homer of the season, for the Tigers, who were coming off a three-game sweep in Houston. Tigers starter Tarik Skubal (0-2) struggled with his control, walking four in four innings. Five Detroit pitchers combined to walk 12 batters.