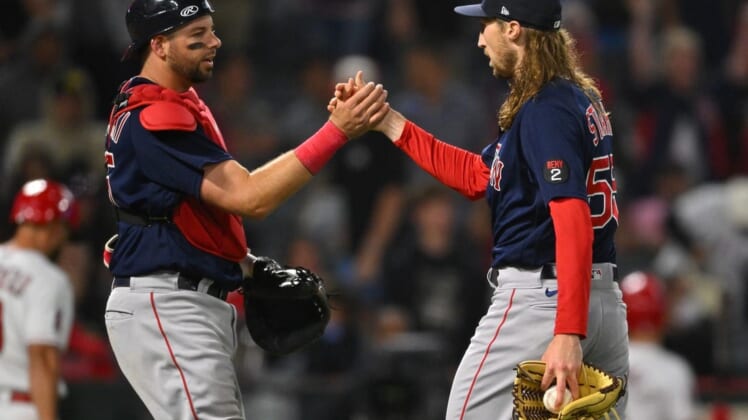 Nathan Eovaldi threw five scoreless innings, Bobby Dalbec drove in the only run of the game with a sixth-inning double, and the Boston Red Sox ran their winning streak to seven games by beating the Los Angeles Angels 1-0 on Wednesday night in Anaheim, Calif.

The Angels took their 14th straight loss, setting a franchise record, including the last two under interim manager Phil Nevin. Los Angeles matched Boston with seven hits but went 0-for-4 with runners in scoring position.

Los Angeles was without center fielder Mike Trout, who is day-to-day due to a tight left groin.

Eovaldi (4-2) gave up six hits but did not walk a batter, striking out five and making 84 pitches. Jimmy Herget (1-1) took the loss in relief after allowing a run in his lone inning.

Nola (4-4) allowed four hits, struck out six and didn’t walk a batter en route to winning a third consecutive start for the first time since May 2019. Bryson Stott and Kyle Schwarber each had four hits and two RBIs for the Phillies, who have won all five games since Girardi was replaced by interim manager Rob Thomson.

Stott, Rhys Hoskins, Odubel Herrera and Bryce Harper homered for Philadelphia, which has won six straight overall. The Brewers were shut out for the third time in their five-game losing streak. Starter Adrian Houser (3-6) went six innings, allowing five runs and seven hits, including three home runs. He struck out five and walked one.

Colorado right fielder Charlie Blackmon’s misplay with one out in the bottom of the 10th inning allowed host San Francisco to emerge with a victory.

Luis Gonzalez singled to right off Carlos Estevez (1-3). Designated runner Donovan Walton was stopping at third until Blackmon failed to field the ball and it rolled behind him. Walton then rushed home with the winning run.

Mike Yastrzemski had three hits and Thairo Estrada had a run-scoring single for the Giants. Camilo Doval (1-2) pitched a perfect top of the 10th for the win. Blackmon and Connor Joe each had two hits for the Rockies.

Ryan Jeffers and Byron Buxton hit solo homers in the fifth inning off Nestor Cortes to end an impressive streak by the New York left-hander as Minnesota won in Minneapolis.

Daz Cameron drove in two runs with a double and a triple to lift visiting Detroit to a victory over Pittsburgh.

Miguel Cabrera added an RBI single for the Tigers, who completed a sweep of the two-game series. Detroit rookie starter Alex Faedo allowed one run on three hits and struck out seven in five innings.

Will Vest (1-1) picked up the win after striking out one in a scoreless seventh inning. Gregory Soto retired the side in the ninth inning to secure his 12th save.

Carlos Santana had four hits and reached base five times to help visiting Kansas City, which had been shut out by Baltimore in the first two games of the series. It was the first four-hit game of the season for Santana, raising his batting average to a season-high .188.

Royals starter Brady Singer (3-1) picked up the win, allowing three runs on eight hits in his five innings. He struck out five, and for the fourth time in his five starts since returning to the rotation on May 17, he didn’t walk anyone. Singer has walked just three in 29 2/3 innings.

Trevor Richards (2-1) took the loss, allowing two runs in the fourth inning after the Jays had tied the score at 3-3.

The tying run was scored by placed runner Jazz Chisholm Jr., who was initially called out after Willians Astudillo’s single to right that preceded Aguilar’s game-winner. However, on video replay it was ruled that Nationals catcher Keibert Ruiz did not give Chisholm a lane to the plate. Chisholm missed touching home with his dive, but that no longer mattered once the umpires made their ruling.

Although the Marlins won, they did not get a victory for Sandy Alcantara, who was brilliant. He pitched nine scoreless innings, lowering his ERA to 1.61, best in the majors. Washington’s Josiah Gray stranded seven runners in five innings, allowing six hits and one walk.

The Dodgers snapped a three-game losing streak while snapping the White Sox’s three game winning streak. Gonsolin (7-0) allowed one run on three hits with one walk and five strikeouts to lower his ERA to 1.58.

Jake Burger homered for the White Sox. Johnny Cueto (0-3) took the loss after scattering three runs and four hits in six innings with one walk and five strikeouts.

The Braves put the game away by scoring seven times in the seventh. Austin Riley, William Contreras, Ozzie Albies and Adam Duvall homered for Atlanta.

Logan Gilbert produced his fifth consecutive quality start, Cal Raleigh homered for the second time in the series and visiting Seattle defeated Houston in the rubber match of the three-game set.

The Mariners won their fourth consecutive series and second over the Astros in that span. Seattle finished a nine-game road trip at 6-3 by snapping a nine-series skid in Houston. Gilbert (6-2) allowed three runs on seven hits and three walks with three strikeouts over six innings.

Astros right-hander Jose Urquidy (5-3) allowed a career-high four walks while giving up five runs (four earned) on seven hits in 4 1/3 innings. In three starts vs. Seattle this year, Urquidy is 0-3 with a 10.38 ERA.

Center fielder Alek Thomas made a pair of spectacular catches on Joey Votto, including a home run-saving leap, and Merrill Kelly allowed one hit over six shutout innings to lead visiting Arizona past Cincinnati.

Kelly (5-3) struck out five and walked three in winning his second straight start, going six innings for the first time since May 6. Christian Walker got the scoring underway in the fourth with a line drive home run to the seats in left field.

Mike Minor (0-2) was charged with three runs on three hits, while walking three and striking out four.

Randy Arozarena had three hits and four RBIs to pace an 18-hit outburst as Tampa Bay surged to a rout of St. Louis in St. Petersburg, Fla.

Manuel Margot went 4-for-5 including a double, scored twice and walked, while Ji-Man Choi was 3-for-5 with a double, three runs and two RBIs. Vidal Brujan (double, three RBIs) and Francisco Mejia (double) each had two hits as every starter logged at least one.

Tyler O’Neill was 2-for-4 with a homer and three RBIs for the Cardinals, and Paul Goldschmidt singled in the sixth to move his on-base streak to 44 games. St. Louis opener Packy Naughton (0-2) was hit hard after recording just four outs. The Rays scored four runs on five hits in the first two innings.

Eli Morgan earned the victory with 1 2/3 innings of hitless relief as host Cleveland blanked Texas to win two of three games in the series.

The Guardians have seven victories in their past nine games and reached the .500 mark (26-26). Morgan (2-1) struck out two and walked none after a 2-hour, 7-minute rain delay. Cleveland ace Shane Bieber was cruising until then. He allowed three hits, no runs and no walks. He struck out six and wasn’t happy when the game was stopped.

Andres Gimenez doubled twice and drove in a run, and Jose Ramirez and Josh Naylor each added two hits and an RBI. Losing pitcher Dane Dunning (1-4), winless in his past seven starts, pitched four innings and allowed nine hits, four runs and no walks. He struck out one.