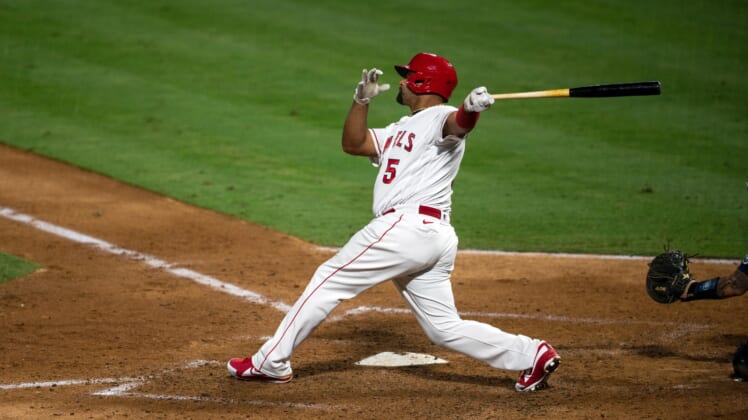 Albert Pujols hit two homers and moved into sole possession of fifth place on the major league career home run list, leading the Los Angeles Angels to a 6-2 win against the Texas Rangers in the opener of a four-game series on Friday night in Anaheim, Calif.

Pujols hit a line drive over the left field fence in the fifth inning off Wes Benjamin (1-1) for the 661st home run of his career, moving him past Willie Mays on the all-time list. The 40-year-old designated hitter lifted another solo shot to left in the seventh for Los Angeles.

Angels starter Jaime Barria allowed two runs and six hits and no walks in 6 1/3 innings while matching his career high with eight strikeouts. Barria (1-0) was 0-7 since his last major league win on July 24, 2019, against the Los Angeles Dodgers.

Anderson Tejeda had two hits and Willie Calhoun drove in both runs for the Rangers.

The win, coupled with third-place Seattle’s loss to San Diego, assured the American League West-leading A’s will finish no worse than second in the division. The A’s, a wild-card team each of the last two seasons, also lowered their magic number to win their first division title since 2013 to three over Houston.

Bassitt (5-2) took a shutout two outs into the seventh before exiting in favor of right-hander Yusmeiro Petit with two on and two out. Bassitt gave up three hits and three walks in his 6 2/3 innings. He struck out seven.

Tucker Barnhart and Joey Votto also homered in the third, and Nick Castellanos delivered a solo shot in the first for Cincinnati. Sitting .500 for the first time since Aug. 3, the Reds have worked themselves into postseason position.

Cincinnati’s Tyler Mahle (2-2) allowed a run, four hits, struck out eight and walked one over 5 2/3 innings. The American League Central-leading White Sox, who clinched their first postseason berth since 2008 with Thursday’s win over Minnesota, loaded the bases against Mahle with nobody out in the sixth, but managed only a run on Eloy Jimenez’s RBI groundout.

The Lowes came up with their run-scoring hits early in the game, and Glasnow and the bullpen made it stand up. Glasnow (4-1) has pitched well against Baltimore — he entered 3-0 with a 2.12 ERA in five career starts against the Orioles. He gave up one run on four hits in five innings while striking out 10 and walking two.

Collectively, the Rays’ bullpen quartet gave up just one hit over four shutout innings, struck out four without a walk, and saw Ryan Sherriff work a perfect ninth for his first career save. Tampa Bay has won the first three games of this five-game series.

Bryce Harper hit a two-run homer and Zach Eflin tossed a seven-inning complete game shutout to lead Philadelphia past Toronto in the first game of a doubleheader.

Andrew Knapp added a two-run triple and Didi Gregorius had three hits for the Phillies, who were the road team for the first game of the doubleheader despite playing at home. Phil Gosselin and Alex Bohm each added two hits, and Eflin (3-2) allowed just four hits and two walks against nine strikeouts in his third career shutout.

Cavan Biggio had two hits for the Blue Jays, who dropped their fourth in a row. Robbie Ray (2-5) took the loss after giving up five hits and five runs in 4 1/3 innings.

The Phillies also won the first game 7-0 for their first twin bill sweep since Sept. 9, 2012, against the Colorado Rockies. Bryce Harper stayed hot with a pair of doubles, one single, one walk and two RBIs.

Phillies starter David Hale was effective in a bullpen start as he threw 34 pitches in 3 1/3 innings. Hale allowed four hits and two runs. Connor Brogdon (1-0) earned his first major league win and Hector Neris earned his fifth save with a scoreless ninth despite walking two.

Chicago won its fifth game in a row, which is one shy of its best streak of the season. Minnesota lost for the fourth time in five games. The high-powered Twins lineup was shut out for only the second time this season. Cubs right-hander Jeremy Jeffress pitched a scoreless ninth to record his eighth save.

Hendricks (6-4) held the Twins to three single and walked only one. The Cubs scored the game’s only run in the bottom of the first, when Anthony Rizzo drew a leadoff walk, stole second, and scored two batters later on Willson Contreras’ single to center.

Erick Fedde pitched six scoreless innings, and Washington was able to figure out Miami starter Sixto Sanchez, in the opening game of a doubleheader.

Fedde (2-2) picked up his first win since Aug. 14 after holding the Marlins to just one hit and striking out six. Will Harris pitched a scoreless seventh to close it out for the last-place Nationals.

Miami, vying for a playoff spot for the first time since 2003, has lost three of its last four. Sanchez (3-2) had the worst game of his young career after giving up career highs of eight hits and five runs in a career-low four innings.

It was the first career three-homer game for Anderson, who hit a solo shot and a pair of three-run blasts. His third homer came off of infielder Brock Holt with Miami holding a big lead in the sixth inning. Reliever Yimi Garcia (3-0) got the final two outs in the fifth to pick up the win.

DJ LeMahieu hit a tiebreaking double with two outs in the 12th inning, and New York outlasted host Boston to run its winning streak to a season-high nine games.

The Yankees beat the Red Sox for the 11th straight time by chipping away at a four-run deficit. Gary Sanchez forged a 4-4 tie by hitting a solo homer with two outs in the ninth off Matt Barnes. Yankees reliever Jonathan Loaisiga (3-0) pitched a scoreless 12th to close out the 4-hour, 55-minute marathon.

Red Sox starter Martin Perez produced his second scoreless start of the season and got a season-high seven strikeouts before Boston blew the lead. New York left-hander Jordan Montgomery allowed four runs on five hits in 4 2/3 innings, six relievers combined to allow one run the rest of the way.

The Padres won for the ninth time in the past 11 games and they are on the verge of clinching a National League playoff berth. The Mariners took their fourth straight loss.

Christian Yelich hit his 150th career homer to help Milwaukee win for the fourth time in six games. Arcia had four RBIs while going 2-for-3 with a walk and scoring twice.

Salvador Perez was 4-for-5 with a homer and four RBIs for the Royals, who had 11 hits while losing for just the second time in nine games. Perez’s homer, his seventh of the season, was a solo shot in the ninth off left-hander Josh Hader.

Zach Plesac tied a career high with 11 strikeouts, and Delino DeShields tripled and scored the game’s only run as Cleveland edged host Detroit.

Plesac (4-2) pitched 7 2/3 innings and gave up five hits and one walk for Cleveland. Brad Hand notched his 13th save despite allowing a one-out triple in the ninth.

Detroit starter Michael Fulmer held the Indians to one hit in three innings while recording two strikeouts. The Tigers were shut out for the second time in three games and the fourth time in 10 games.

Paul Goldschmidt added an RBI double for St. Louis, which built a 6-2 lead and was forced to hang on from there.

Bryan Reynolds hit a two-run homer for the Pirates, who have lost nine of their past 10. Pittsburgh starter Chad Kuhl (1-3) pitched five-plus innings. He gave up four runs, with just one earned, struck out six and walked two.

Gavin Lux homered among his two hits and Chris Taylor, Corey Seager, Austin Barnes and Edwin Rios also had two hits for the Dodgers, who collected a season-high 17 hits. Mitch White (1-0), the last of seven Los Angeles pitchers on a bullpen night, got his first major league win after throwing two scoreless innings.

Josh Fuentes homered and finished with three hits and Kevin Pillar had two hits for the fading Rockies, who have lost eight of their past 10.

Marcell Ozuna, Austin Riley, Travis d’Arnaud and Ronald Acuna Jr. also homers for the Braves, who began the day with a three-game lead over the Miami Marlins in the NL East. Max Fried (7-0), making his first start since Sept. 5, allowed one run on three hits and two walks while striking out three over five innings for Atlanta.

Amed Rosario went 3-for-4 with an RBI infield single, and Jeff McNeil had an RBI double for the Mets. Steven Matz (0-5) allowed six runs on eight hits and three walks with five strikeouts over 2 2/3 innings while taking the loss.

Kole Calhoun recorded his second multi-homer game of the week to support a quality start from Zac Gallen as Arizona rallied past host Houston.

Calhoun bashed a three-run homer into the upper deck in right field off right-hander Zack Greinke in the fourth inning to allow the Diamondbacks to erase a 2-0 deficit, then added a solo shot in the eighth. Gallen (2-2) gave up three runs, one earned, on six hits and one walk with six strikeouts over six innings.

Greinke didn’t factor in the decision after giving up three runs and six walks, with a season high nine strikeouts, over five innings. George Springer, Kyle Tucker and Michael Brantley each had two hits for the Astros.