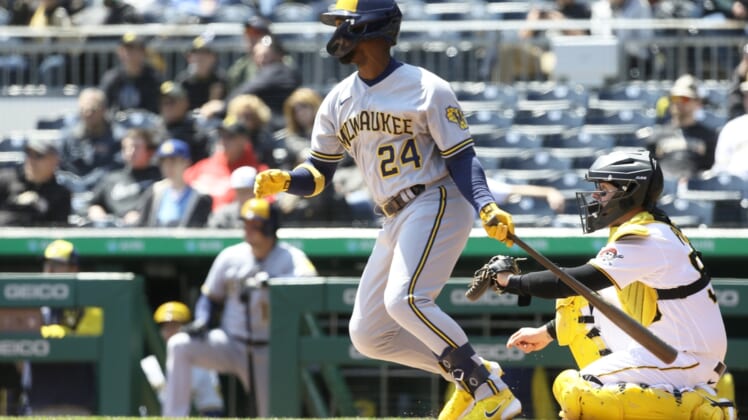 Andrew McCutchen hit a home run and drove in two runs in the ninth inning Thursday as the visiting Milwaukee Brewers rallied for a 3-2 victory over the Pittsburgh Pirates to complete a three-game series sweep.

McCutchen, who played his first nine seasons with the Pirates, singled to center against his former team to drive in Yelich and Wong. McCutchen also sent the game’s first pitch into the stands in left for his first home run of the season.

Milwaukee starter Freddy Peralta gave up three hits over six scoreless innings with no walks and seven strikeouts. Rookies Jack Suwinski and Diego Castillo each drove in a run for the Pirates, who are 0-6 against the Brewers.

Aaron Judge hit a three-run homer and had the tying single in the fifth as the Yankees won for the eighth time in nine games. Judge’s hard single deflected off second baseman Rougned Odor’s glove, after Orioles shortstop Jorge Mateo booted DJ LeMahieu’s grounder for Baltimore’s second error of the inning.

Rizzo snapped a 2-2 tie in the fifth when he lined a single off Baltimore starter Bruce Zimmermann (1-1) and Giancarlo Stanton followed Rizzo with an RBI single. New York starter Jameson Taillon allowed two runs and seven hits in 4 2/3 innings and Miguel Castro (2-0) escaped a bases loaded jam in the fifth.

Ha-Seong Kim lined a tie-breaking two-out, three-run double in the sixth inning to lead visiting San Diego over Cincinnati and secure a sweep of the six-game season series.

Manny Machado had four hits, including a double, and Jorge Alfaro knocked in two runs for San Diego. Nick Martinez (1-2) allowed two runs on five hits and two walks with five strikeouts in five innings to earn his first win as a Padre. Taylor Rogers earned his seventh save.

Mike Moustakas went 2-for-3 with an RBI and two runs scored for Cincinnati.

Carlos Correa went 3-for-5 with three RBIs, including a bases-loaded double in the fifth inning, to help host Minnesota beat Detroit for its seventh straight win.

Gio Urshela had three hits and an RBI, and Trevor Larnach and Gilberto Celestino each added two hits and an RBI for the Twins. Cody Stashak (1-0), taking over when starter Bailey Ober left with a groin injury, picked up the win by allowing two hits over 1 1/3 innings while striking out one.

Robbie Grossman went 3-for-5 and Harold Castro had two hits for the Tigers, who committed four errors while losing their fifth straight game. Tarik Skubal (1-2) suffered the loss, allowing six runs (three earned) on six hits and two walks over five innings. He struck out four.

The Phillies scored seven runs on only four hits.Wheeler (1-3) allowed only one hit to go along with seven strikeouts and four walks.

The struggling Rockies had five hits with no player recording more than one. Rockies starter Austin Gomber (1-2) gave up three hits and three runs, two earned, in six innings.

Brett Phillips had a pair of two-out, run-scoring singles and made a key defensive play in the ninth inning as Tampa Bay defeated visiting Seattle in St. Petersburg, Fla.

Harold Ramirez scored twice for the Rays, who took two of three games in the series.

J.P. Feyereisen (1-0) earned the victory with two perfect innings of relief and fellow right-hander Ryan Thompson got the final out, catching pinch-hitter Tom Murphy looking at a called third strike, for his second save of the season.

Defending American League MVP Shohei Ohtani got his first day off of the season, but host Los Angeles didn’t miss a beat, beating Cleveland to complete a four-game sweep in Anaheim, Calif.

With Ohtani on the bench and Mike Trout getting a semi-day off as the designated hitter, the Angels offense was not as sharp as it has been of late. They had just six hits, including three by Brandon Marsh, but made the most of their opportunities. Leadoff hitter Taylor Ward drove in two runs and Tyler Wade scored twice.

The limited offense was enough because Los Angeles got another strong performance from its pitching staff. Starter Reid Detmers (1-1) gave up one run and two hits in five innings to get his first victory of the season. The bullpen came up big again, with four relievers combining for four scoreless innings.

Kyle Tucker ripped a two-run, pinch-hit home run in the eighth inning to back the four-hit outing of starter Justin Verlander as visiting Houston defeated Texas in Arlington, Texas, in the finale of a four-game series.

Tucker’s homer off reliever Matt Bush (0-1) drove in Jeremy Pena, who had been hit by a pitch, and allowed Verlander (2-1) his second victory in four starts this season after missing all of 2021 with an elbow injury that required Tommy John surgery.

Verlander, 39, struck out eight and did not walk a batter and lowered his ERA to 1.73. Rafael Montero allowed a one-out home run to Texas’ Corey Seager in the ninth and then worked out of a two-out jam for his first save of the year.

Trevor Rogers (1-3) earned his first victory of the season, allowing just two hits, two walks and one run in six innings. He struck out four. Cole Sulser got the final four outs for his first save with Miami.

Josh Bell and Cesar Hernandez each had an RBI double for the Nats. Patrick Corbin (0-4) took the loss, allowing four hits, two walks and three runs, two earned, in six-plus innings. He struck out a season-high eight batters. The Nationals have lost eight straight games, their longest skid since 2009.

Manoah (4-0) held the Red Sox to three hits and one walk. Jordan Romano pitched around a single in the ninth to earn his ninth save of the season.

Alejandro Kirk had two singles and an RBI for the Blue Jays. In the third inning, Lourdes Gurriel Jr. reached base with one out on an error by Red Sox shortstop Christian Arroyo. Raimel Tapia walked and Kirk hit a two-out RBI single.

The Royals loaded the bases with one out in the 10th. After Bobby Witt Jr. struck out, a passed ball scored the go-ahead run. Isbel then stroked an opposite-field single. The White Sox walked 23 Royals in the three-game series, including eight in this game and two in the 10th.

Royals right-hander Brad Keller allowed one run on three hits in seven innings. It was his third quality start of the season, but he has yet to get a win. Chicago starter Michael Kopech allowed two runs on three hits. He struck out three and walked four, needing 94 pitches to get through five innings.