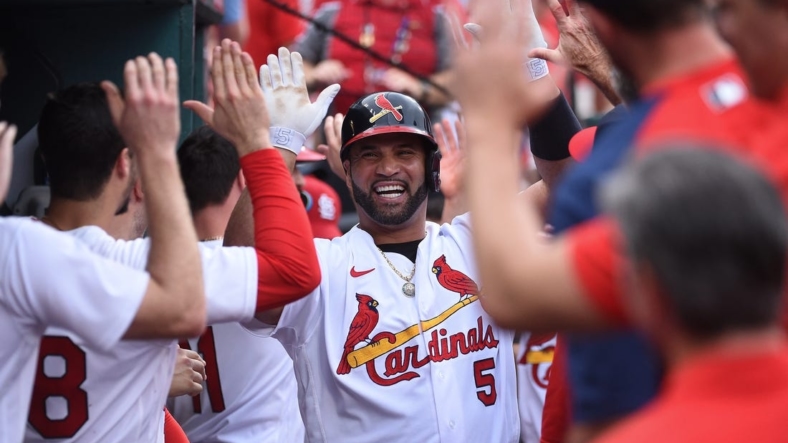 Albert Pujols hit his 695th career homer, a two-run blast in the eighth inning, to lift the St. Louis Cardinals past the visiting Chicago Cubs 2-0 on Sunday.

Pujols’ homer carried 429 feet over the left field bullpen. He is now one behind Alex Rodriguez (696) for fourth place on baseball’s all-time home-run list.

Cardinals starting pitcher Miles Mikolas (11-10) blanked the Cubs for eight innings, allowing just two hits. He struck out three and walked one. Ryan Helsley closed out the game for his 13th save as the Cardinals won for the seventh time in their last eight games.

Aaron Judge hit his 53rd homer two pitches into the game and scored a run in the seventh inning as New York held on for a victory over Tampa Bay at St. Petersburg, Fla.

The Yankees ended an underwhelming 4-6 road trip and head back to New York with a five-game lead over Tampa Bay in the AL East. Frankie Montas (5-11) pitched five innings for his first win since joining the Yankees at the trade deadline. He allowed one hit, struck out seven, walked none and worked around two errors.

New York had just three runs in the series, with Judge involved in all of them after also hitting a home run on Saturday. On Sunday, he hit a 450-foot homer off Tampa Bay opener Shawn Armstrong (2-2), had three hits and scored on a sacrifice fly by rookie Oswaldo Cabrera in the seventh.

Cal Raleigh hit a two-run homer in the 11th inning to help visiting Seattle complete a three-game sweep against Cleveland.

Julio Rodriguez had four hits, including a solo home run, and scored twice for the Mariners, who have won seven in a row. Josh Naylor had two hits and an RBI for the Guardians, who have lost five straight to fall into a tie for first in the AL Central with the Minnesota Twins.

The series finale took more than eight hours to complete due to a rain delay of just over 4 1/2 hours.

Gallen (11-2) turned in another dominant outing, allowing two hits with one walk and seven strikeouts while throwing 103 pitches over seven innings. He also tied the major league record for most consecutive starts without allowing a run by logging his sixth. Don Drysdale, Orel Hershiser and Zack Greinke are the only three other pitchers to accomplish the feat.

The Brewers were held to a pair of singles before Hunter Renfroe’s two-out homer in the ninth against Mark Melancon. Milwaukee starter Jason Alexander yielded three runs on five hits with four walks and three strikeouts over 4 2/3 innings.

Fried (13-5) gave up a walk to Nick Fortes to lead off the fifth inning, but he got fleet Joey Wendle to ground into an inning-ending double play. Moments later the game was halted because of heavy rain. Fried did not return after a delay of almost two hours.

The Marlins scored their lone run in the eighth. Jerar Encarnacion singled and took second on left fielder Eddie Rosario’s error. He scored on Wendle’s single. Atlanta broke things open in the bottom of the frame, scoring three times on an RBI single by Harris and a two-run single by Ronald Acuna Jr.

Teoscar Hernandez hit a tiebreaking RBI single in the seventh inning to give visiting Toronto a three-game series sweep over Pittsburgh.

At 3-3 in the seventh inning against Pirates right-hander Duane Underwood Jr. (1-5), Danny Jansen singled to left and Matt Chapman singled to right. After Vladimir Guerrero Jr. grounded into a double play, Hernandez drove in Jansen with a single to right on an 0-2 pitch.

Cavan Biggio hit a home run, while Whit Merrifield and Alejandro Kirk each added an RBI single for the Blue Jays, who blew an early 3-0 lead. Oneil Cruz homered and Josh VanMeter hit a two-run double for the Pirates, who have lost four consecutive games.

Erick Fedde tossed six strong innings and Keibert Ruiz had three hits with two RBIs as Washington rolled past host New York in the finale of a three-game series between the National League East rivals.

The Nationals have won two straight series for the first time since taking two of three from the Texas Rangers and Pittsburgh Pirates in late June.

The Mets, whose lead over the Atlanta Braves in the NL East wsa sliced to one game, are 6-6 in their last 12 games. They entered off a series victory over the major-league-best Los Angeles Dodgers.

Bundy (8-6) allowed two hits and a walk to pick up the win. He struck out four and left after throwing just 66 pitches, 47 of which were strikes.

Altuve singled to lead off the game, had an RBI double in the second inning and hit a two-run homer in the seventh for Houston, which also got a two-run homer from Kyle Tucker. The Astros scored five runs in the second off Angels starter Tucker Davidson (2-5) to give Urquidy (13-5) room to work. He gave up just four hits, walked one and struck out eight.

Mike Trout homered in the eighth inning off Astros reliever Brandon Bielak for the Angels’ lone run. It was Trout’s 29th homer of the season and 339th of his career.

Wilmer Flores lined a two-out, two-run home run in the bottom of the ninth inning as San Francisco, after blowing a late three-run lead, completed a three-game sweep over visiting Philadelphia.

With their eighth walk-off win this season, the Giants kept their flickering hopes alive in the National League wild-card race, moving within eight games of the Phillies for the last playoff spot.

The loss was the Phillies’ fifth on a six-game Western swing. The walk-off defeat was their fifth of the year.

Will Smith and Trayce Thompson hit home runs as Los Angeles answered a late rally by visiting San Diego to earn a victory.

Trea Turner had a two-run double as the Dodgers won consecutive games over the Padres to rebound from Friday’s 7-1 defeat. Los Angeles improved to 47-17 at home this season.

Jurickson Profar had a two-run double for the Padres, while starter Mike Clevinger (5-6) was knocked around for five runs on four hits over 3 1/3 innings with two walks and four strikeouts. San Diego has lost consecutive games following a four-game winning streak. The Padres dropped to 3-10 against the Dodgers this season, their most defeats against any club.

Pinch-hitter Charlie Blackmon delivered a tie-breaking two-run single as part of a four-run seventh inning Sunday to help rally visiting Colorado past Cincinnati in the first game of a doubleheader.

Colorado starter German Marquez (8-10) breezed through the first three innings, allowing only a one-out walk to Jonathan India in the first. He allowed two runs on three hits with three walks and four strikeouts.

Aristides Aquino entered the game for an injured Jonathan India and connected for his first career grand slam as Cincinnati blanked visiting Colorado to earn a split of their doubleheader.

Aquino came on in the fifth inning after India fouled a ball directly off the inside of his left calf. Aquino swung and missed on a strikeout that was charged to India, who went hitless in three official at-bats to bring an end to his 16-game hitting streak, the longest in the majors.

Chase Anderson started for the Reds and did not allow a hit over his 2 2/3 innings while striking out four. But he had to work his way around four walks before Derek Law recorded the final out of the third inning. Law (2-1) earned the win with two scoreless innings.

Rookie Cody Thomas had three hits in his third major league game and Shea Langeliers had a two-run single for the A’s, who had lost four straight.

Orioles starter Spenser Watkins (4-6) gave up four runs on nine hits over six innings. He walked one and didn’t strike out a batter. Ramon Urias and Anthony Santander had two hits apiece for Baltimore, which despite the loss, has won five straight series for the first time since 2014.

Trevor Story went 3-for-4 with a three-run homer and a double as Boston completed a four-game sweep of visiting Texas.

Story’s 16th homer of the season was the big blow in a four-run first inning for Boston, which has won five straight games. Xander Bogaerts also went 3-for-4, doubled, scored a run and drove in two more, while Alex Verdugo and Rob Refsnyder each had two more of the 12 Red Sox hits.

Boston’s Josh Winckowski worked four innings of three-hit, two-run ball while pitching in place of Kutter Crawford, who was scratched from his start and placed on the 15-day injured list (right shoulder impingement) prior to the game.

Bobby Witt Jr. drove in the go-ahead run with a two-out double in the eighth and Kansas City topped host Detroit.

MJ Melendez scored a run and drove in another. Michael A. Taylor had three hits and added a run for Kansas City. Winning pitcher Dylan Coleman (4-1) pitched 1 1/3 innings of scoreless relief. Scott Barlow notched his 21st save.

Nicky Lopez drew a one-out walk against Gregory Soto (2-8) in the eighth. Melendez doubled to left but Lopez was thrown out trying to score. Witt then bounced his double just past third baseman Jeimer Candelario to drive in Melendez. Harold Castro hit a two-run home run for the Tigers, who have lost five of their last six games.