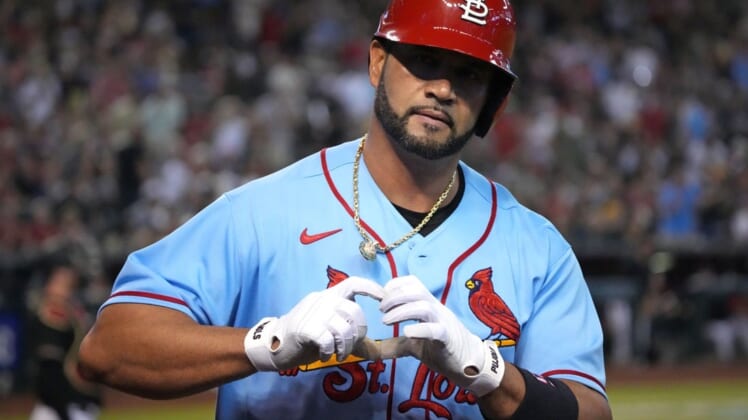 Albert Pujols went 4-for-4 and smacked two long homers, and Paul DeJong hit a grand slam to lead the St. Louis Cardinals to a 16-7 victory over the host Arizona Diamondbacks on Saturday night in Phoenix.

Pujols also moved into second on the all-time total bases list with 6,143. He passed Cardinals legend Stan Musial (6,134) and only trails Hank Aaron (6,856).

Lars Nootbaar reached base five times on three hits and two walks and drove in three runs on a two-run triple and an RBI single as the Cardinals won their sixth straight game and 17th of their last 21. Nootbaar scored on the triple due to an Arizona error.

Carson Kelly drove in three runs and Jake McCarthy homered for the Diamondbacks. Arizona starter Madison Bumgarner (6-13) gave up five runs and seven hits over 5 1/3 innings while dropping to 0-4 over his last five starts. He struck out three and walked two.

Josh Bell and Juan Soto homered against their former team to give San Diego a victory over visiting Washington.

Soto’s solo shot to lead off the bottom of the seventh inning broke a 1-1 tie. Bell smacked his homer with two outs in the fifth inning. The Padres dropped the first two games of the series.

Lane Thomas hit his 12th homer of the season in the second inning to account for Washington’s lone run.

Brandon Nimmo contributed two doubles and an RBI, Starling Marte also had three hits and an RBI and Francisco Lindor hit an RBI triple for the Mets, who improved to 13-4 against the Phillies this season.

Nick Castellanos had two hits for the struggling Phillies, who went 1-for-5 with runners in scoring position and have dropped three consecutive games.

Alec Bohm hit a double and drove in two runs to lift host Philadelphia past New York in the second game of a day-night doubleheader.

Rhys Hoskins had two hits and an RBI, J.T. Realmuto contributed an RBI single and Jean Segura and Kyle Schwarber had two hits each for the Phillies, who snapped a three-game losing streak. The Phillies had dropped the first two games of this crucial four-game series.

The Mets managed only three hits, but had runners on first and second in the ninth with two outs. Brett Baty grounded out to end the game. Mets starter David Peterson (6-3) lasted 4 2/3 innings and allowed eight hits and three runs to go along with six strikeouts and two walks.

The Blue Jays won their fourth straight and moved within seven games of the first-place Yankees in the American League East. It is the closest they have been to first place since also being seven out on June 8. New York is 3-14 in its past 17 games and 12-25 since holding a 15 1/2-game lead on July 8.

Jackie Bradley Jr. hit a go-ahead two-run double after Santiago Espinal’s double gave Toronto its first hit off Cole (9-6). Cole allowed four runs on five hits in six innings to fall to 0-4 in six starts since the All-Star break. Adam Cimber (9-4) was awarded the win after striking out two batters in one inning, and Yimi Garcia worked the ninth to secure his first save.

Nick Madrigal delivered a two-out, game-tying RBI single off Devin Williams in the ninth, and Willson Contreras came through with his own tiebreaking hit in the 11th, as Chicago won its fifth straight, beating visiting Milwaukee.

After Milwaukee went ahead on a run-scoring fielder’s choice in the top of the 11th, Chicago’s Patrick Wisdom tied it with a double in the bottom of the frame. Then with two out and a man on third, Contreras lined a single to right — off Peter Strzelecki (1-1) — for the Cubs, who have won 11 of 15 overall and four straight against the Brewers.

Milwaukee went up 4-3 in the 10th on Mike Brosseau’s pinch-hit RBI single, but the Cubs tied it when Ian Happ scored from third after left fielder Christian Yelich dropped the ball while transferring it after a catch in the bottom of the frame. Fighting for a fifth straight National League postseason appearance, Milwaukee has dropped 12 of its last 18.

Wacha (8-1) surrendered four hits, struck out four and walked one in the second game of the three-game series. Christian Arroyo had three hits for the third time in the past four games and Enrique Hernandez drilled a two-run homer for the Red Sox, who avoided a three-game losing streak.

Baltimore starter Kyle Bradish (1-5) allowed three runs and nine hits in 5 2/3 innings. The rookie right-hander struck out six with no walks. Ramon Urias, Adley Rutschman and Jorge Mateo had two hits each for the Orioles.

Cueto (6-5) allowed five hits and struck out two batters before exiting one out shy of his second complete-game performance of the season and the 19th of his career. He improved to 5-1 in his last 10 outings overall after Liam Hendriks struck out Oscar Gonzalez to secure his 28th save of the season.

Gonzalez collected two of the five hits for the Guardians, who lost for just the fourth time in their last 14 games. Cleveland’s Shane Bieber (8-7) saw his four-start winning streak come to a halt despite allowing just two runs on five hits in 6 1/3 innings. He walked three and struck out four.

Corey Seager and Mark Mathias had RBI singles in the 10th inning to lead visiting Texas to a victory over Minnesota in Minneapolis.

Nathaniel Lowe had four hits, his 37th multi-hit game of the season, Seager had two hits and also scored a run and Adolis Garcia extended his hitting streak to 17 games with an RBI double for Texas, which improved to just 8-25 in one-run games this season. Jonathan Hernandez (1-0) picked up the win.

American League batting leader Luis Arraez had an RBI single, and Jose Miranda had a game-tying RBI base hit in the eighth for Minnesota, which had a four-game winning streak snapped.

Jonathan Schoop, Willi Castro and Jeimer Candelario drove in the other runs for Detroit, which had lost 10 of its previous 12 games.

Alexander (3-7) gave up three runs and seven hits in six innings. Alex Lange, Joe Jimenez and Gregory Soto each followed with an inning of scoreless relief, as Soto recorded his 23rd save.

Drew Rasmussen opened with 5 1/3 hitless innings in his second straight masterful start, lifting the Rays to a victory over visiting Kansas City in St. Petersburg, Fla.

Yandy Diaz was 2-for-3 with a double and an RBI, and Isaac Paredes and Harold Ramirez had two hits apiece. Yu Chang had two RBIs.

Every starter had at least one hit for the Reds, who won for the third time in 11 games to move ahead of the Pirates into fourth place in the National League Central. Justin Dunn (1-1), who won in the majors for the first time since April 15, 2021, combined with four relievers on a four-hitter.

Rodolfo Castro homered in the fourth for the Pirates, who had their two-game winning streak snapped and have lost 11 of 15. Pittsburgh starter Tyler Beede (1-3) gave up five runs (four earned) on six hits and one walk while striking out two over four innings.

Down 4-3 in the bottom of the 11th, Matt Olson delivered a run-scoring double against the shift to tie the game. d’Arnaud came off the bench to drive an opposite-field single against Ryne Stanek (1-1) to give the Braves their 11th win in 12 games.

Jake Meyers and Yuli Gurriel delivered RBI hits off Dylan Lee in the 10th to give Houston a 3-1 lead. But the Braves got run-scoring hits of their own from Michael Harris II and ex-Astro Robbie Grossman against Hector Neris for a 3-3 contest.

Automatic runner Tony Kemp raced home from third base on Sheldon Neuse’s chopper to the mound with no outs in the 10th inning, giving Oakland a walk-off victory over visiting Seattle.

After Dany Jimenez (3-4) held the Mariners scoreless in the top of the 10th, Seattle chose to intentionally walk Seth Brown to put runners at first and second with no outs in the bottom of the inning.

Sean Murphy then drew an unintentional free pass from Diego Castillo (7-2), loading the bases. Neuse hit a one-hopper to the right of the mound that hung in the air long enough to force the pitcher into bobbling the ball in his haste to make a play at the plate. Neuse was credited with an RBI, giving the A’s just their third walk-off win of the season.

Brendan Rodgers had four hits, including a walk-off single in the 10th inning, and Colorado beat visiting San Francisco.

Ryan McMahon had three hits and Lucas Gilbreath (2-0) pitched one inning of relief for the Rockies. Colorado won it when Rodgers lined a single to center off Camilo Doval (4-6) to drive home Wynton Bernard, who started the inning at second base.

Brandon Crawford homered among his two hits and Joey Bart also went deep for the Giants, who have lost four straight. Giants starter Alex Cobb allowed three runs on 10 hits in 6 2/3 innings but was bailed out with a ninth-inning rally.

Will Smith and Justin Turner hit three-run home runs, and Dustin May gave up just one hit in his return to the rotation as Los Angeles cruised to a victory over visiting Miami.

Aside from a slight hiccup in the opening inning, May (1-0) looked dominating once again after not pitching the last 15 months following Tommy John surgery. He struck out nine in his five innings of work on 71 pitches and had just two first-inning walks.

Marlins starter Bryan Hoeing was rocked for seven runs on eight hits over three innings in his major league debut. Hoeing (0-1) was added to the roster as an emergency starter Saturday after scheduled starter Braxton Garrett went on the injured list with an oblique strain.