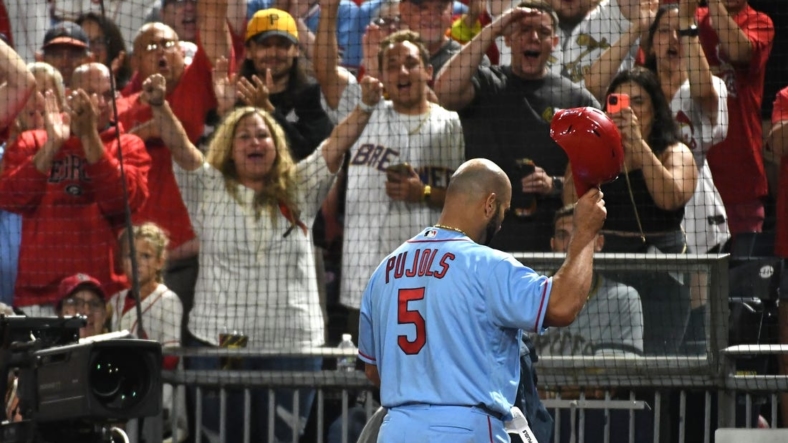 Albert Pujols moved into a tie for fourth place all-time with his 696th homer and Nolan Arenado hit a tiebreaking three-run double in the ninth Saturday as the visiting St. Louis Cardinals downed the Pittsburgh Pirates, 7-5.

With the game tied 4-4 in the ninth against Pirates reliever Wil Crowe (5-9), Yadier Molina singled up the middle and was replaced by pinch-runner Lars Nootbaar, who went to third on Paul DeJong’s single to shallow right.

Brendan Donovan grounded out, and Nootbaar was thrown out at home on Corey Dickerson’s fielder’s choice. Paul Goldschmidt walked, and then Arenado cleared the bases to make it 7-4.

Pujols finished 3-for-4, hitting his two-run shot in the sixth and adding an RBI single in the eighth, and Donovan homered for the Cardinals, who had lost two straight.

New York tagged Tampa Bay starter Corey Kluber for six runs in the first inning en route to a victory that extended its lead in the American League East.

Yankees third baseman Josh Donaldson, who returned from a brief stint on the paternity list, hit a second-inning homer. Aaron Judge did not hit a homer in his quest to beat Roger Maris’ record of 61 long balls but did hit three singles, including a first-inning RBI.

Webb (13-8) allowed a run in each of the first two innings, then settled down and retired 13 straight batters over one stretch.

Meanwhile, Bart recorded three hits while David Villar, who homered in the eighth, and ex-Cub Joc Pederson each had two for San Francisco, which won for just the fourth time in 17 road contests.

AJ Pollock and Andrew Vaughn collected four hits apiece as visiting Chicago pounded out 20 hits for the second time in three days en route to a romp over host Oakland.

On their way to a third straight win in the series and fourth in a row overall, the White Sox bombed Oakland starter Adrian Martinez (4-4) for 14 hits in 3 2/3 innings while building a 7-0 lead.

The 14 hits allowed matched the most in the majors since Alfredo Simon served up 15 in the Detroit Tigers’ 9-3 loss to the Pittsburgh Pirates in 2015.

Victor Reyes was 2-for-4 with three RBIs as Detroit defeated Kansas City. The game was called after 7 1/2 innings because of rain.

The No. 2, 3 and 4 hitters in Detroit’s order combined to go 6-for-12 with seven RBIs. Matt Manning (2-2) had little trouble with the Royals. He allowed three runs (two earned) on three hits over 6 1/3 innings. Throwing a slippery baseball, he only walked one and struck out four.

Kansas City starter Jonathan Heasley (3-8) allowed seven runs on seven hits in four-plus innings. The Royals have lost seven of their last 10 games. Salvador Perez lined a one-out single in the first to score Bobby Witt Jr. with the first run, and the Royals scored a pair of unearned runs in the seventh but left two runners on base.

Enrique Hernandez went 4-for-6 and Rafael Devers hit a first-inning grand slam as part of a five-RBI night to jumpstart Boston’s rout of host Baltimore.

Alex Verdugo and Abraham Almonte both had two hits and scored two runs as the Red Sox totaled 21 hits. Trevor Story and Arroyo had three RBIs apiece. Red Sox starter Michael Wacha (11-1), who hasn’t lost since May 31, struck out five and scattered six hits across six innings of three-run ball.

Cedric Mullins and Ryan Mountcastle each went 2-for-4 for the Orioles. Mullins, who homered and had two RBIs, has five hits in the last two games. Jordan Lyles (10-10) took the loss after allowing eight runs on seven hits in 3 2/3 innings.

Francisco Lindor went 3-for-5 with three runs and two RBIs, and Eduardo Escobar went 3-for-5 with two RBIs and two runs. Escobar and Lindor both fell a triple short of the cycle. Carlos Carrasco (14-6) took over New York’s lead in victories this season as he held Miami to four hits, no walks and one run in six innings. He struck out six batters and lowered his ERA to 3.80.

Pablo Lopez (8-10) took the loss, allowing 10 hits, three walks and eight runs in 3 2/3 innings. His ERA rose from 3.66 to 4.04. The Marlins lost right fielder Avisail Garcia, who left the game in the first inning due to discomfort in his left hamstring.

Winners of 10 of 12, the Blue Jays collected 15 hits in the shootout. Jansen had four hits, two RBIs and two runs. Bichette and Santiago Espinal each had three hits, providing Kevin Gausman (12-9) with plenty of support. Gausman allowed five runs on eight hits with nine strikeouts in 5 1/3 innings.

Texas fell behind by four runs in the first inning and was playing catch-up the rest of the night. Adolis Garcia and Sam Huff both homered for the Rangers. Rangers starter Kohei Arihara (1-3) was tagged for 11 runs in three-plus innings, giving up 12 hits and five walks, with one strikeout. The right-hander also surrendered two home runs.

Triston McKenzie pitched seven shutout innings en route to his 10th victory of the season and Amed Rosario homered to lead Cleveland to a victory over slumping Minnesota in Minneapolis.

Jose Ramirez went 3-for-4 with an RBI and two runs scored, and Steven Kwan walked four times and scored twice for the American League Central Division-leading Guardians, who remained 1 1/2 games ahead of the second-place Chicago White Sox while increasing their lead to 3 1/2 games over the third-place Twins.

Luis Arraez had three hits, including a pair of doubles, and Carlos Correa also had three hits for Minnesota, which lost for the seventh time in its last nine games.

Trout went 2-for-4 with a home run — his sixth straight game with a homer — a double, a walk and three RBIs. Trout’s 34th bomb of the season gave him the club record for homers in consecutive games, surpassing Bobby Bonds’ run of five straight in August 1977. The last player with a longer streak was Joey Votto, who homered in seven consecutive games for Cincinnati in 2021. Trout has nine RBIs during his streak.

The Angels tagged Astros starter Jose Urquidy for six earned runs, matching his season high. Urquidy (13-6) surrendered 10 hits, walked one batter and struck out four over five innings. He shut out the Angels over seven innings in his previous start on Sunday. Ohtani (12-8) departed prior to warming up in the bottom of the sixth with a blister.

Jose Barrero led off the third inning with a double on a flare to right, stole third and came home on TJ Friedl’s sacrifice fly to right to provide the Reds’ only run.

Brandon Marsh came a triple shy of the cycle and drove in two runs to lift host Philadelphia past Washington.

Bryce Harper and Nick Maton each homered and knocked in two runs for the Phillies, who won their second in a row in this series. Kyle Schwarber also blasted a solo homer and doubled. Phillies starter Ranger Suarez (9-5) tossed 6 2/3 innings and gave up seven hits and four runs with four strikeouts and one walk.

Joey Meneses hit a home run, double and had two RBIs for the Nationals.

Justin Lawrence (3-1) tossed 1 2/3 innings of relief and Daniel Bard retired the side in order in the ninth for his 29th save for the Rockies. Jake McCarthy singled, walked twice and scored the lone run for Arizona, which had Ketel Marte and manager Torey Lovullo ejected in its fourth straight loss.

Madison Bumgarner cruised through the first five innings before the Rockies came alive. Grichuk led off the sixth with a double, Yonathan Daza walked and a wild pitch put runners on second and third. Cron then homered to center field, his 28th of the season, to put Colorado in front 3-1. Bumgarner (6-14) allowed four runs on six hits, walked three and struck out two in six innings.

The Braves dropped into second place in the National League East, a half-game behind the New York Mets, after spending their first day of the season atop the division following a 6-4 victory in the series opener Friday.

Trea Turner broke a 1-1 tie with a three-run double as visiting Los Angeles defeated San Diego to even their three-game series at a win apiece.

Freddie Freeman had four hits, including a two-run homer, and four RBIs for the Dodgers. Los Angeles scored four runs in the fifth and three more in the seventh as it improved to 11-4 against the Padres this season.

Dodgers starter Julio Urias (16-7) held the Padres to two runs, five hits and two walks with five strikeouts in seven innings. He gave up a pair of solo home runs to Manny Machado. The Padres scored two in the ninth on a sacrifice fly by Jurickson Profar and an RBI double by Luis Campusano.