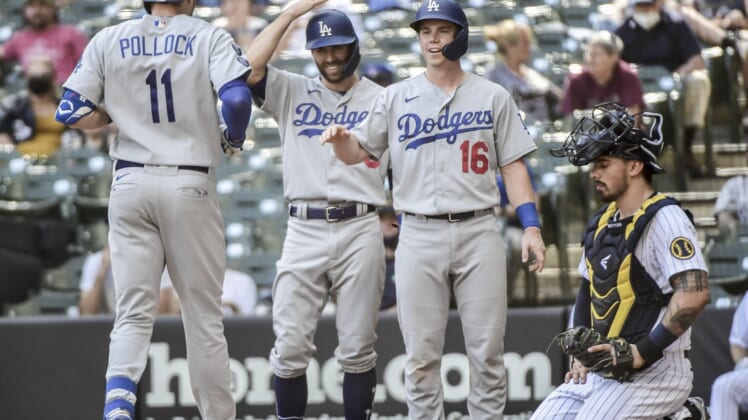 Pollock hit a double and two home runs, including a slam in the five-run first inning, and Beaty, who finished with four hits, tallied his slam in a four-run second inning. Chris Taylor had three hits and scored five runs.

Dodgers left-hander Julio Urias (4-0) struck out 10 and walked none over seven innings. He allowed one run — a solo homer by Brewers catcher Jacob Nottingham — and four hits. Nottingham added a two-run shot off Mike Kickham in the eighth inning.

Kevin Pillar had three hits, including a solo home run, to rally New York past host Philadelphia, which thought it had tied the game in the bottom of the ninth.

Pete Alonso doubled and drove in three runs as the Mets scored six times in the eighth to post the comeback victory. Jeff McNeil added four hits and Michael Conforto had three hits. Jacob Barnes (1-0) earned the win in relief and Jeurys Familia earned his first save after striking out Bryce Harper to end the game.

Didi Gregorius hit a three-run home run and Andrew McCutchen added a solo shot for the Phillies. Rhys Hoskins had two hits and two RBIs, and appeared to tie the game at 8 on a three-run homer off Edwin Diaz in the ninth, but a review ruled it a double off the top of the wall. Brandon Kintzler (1-1) took the loss.

Max Scherzer tossed a complete game, allowing one run on five hits and striking out nine to lead host Washington over Miami.

Ryan Zimmerman provided the Nationals with all the offense they would need with a three-run home run in the top of the third inning off Marlins rookie Trevor Rogers.

The Nationals won their fourth in a row and swept the Marlins, who finished a 10-game road trip with a 3-7 record.

Host Texas battled back for a win over Boston with a slow offensive start giving way to several big hits against the Red Sox bullpen.

For the Red Sox, it was a frustrating afternoon after such a promising start as they wasted a fine pitching display from starter Garrett Richards. In the no-decision, Richards struck out seven, allowing four hits and just a single earned run in five innings.

Josh Sborz got the win for Texas in one inning of relief work, striking out two and giving up no runs to improve his record to 3-1. Adam Ottavino got the loss, the reliever having a rocky eighth inning in giving up two earned runs and walking two. His record now stands at 2-2.

The Padres had beaten the Giants in the first two games of the three-game series. Gausman (2-0) allowed one run on six hits and a walk with six strikeouts. The right-hander also had a hit and scored twice.

Kluber (2-2) posted his 100th career victory by handcuffing the Tigers with a mix of changeups and curveballs. He allowed two singles and one walk in a 103-pitch masterpiece. Aroldis Chapman fanned two in a perfect ninth for his sixth save in as many opportunities.

The Yankees scored on Kyle Higashioka’s double and Brett Gardner’s sacrifice fly in the second inning. The loss went to Detroit right-hander Jose Urena (1-4). He allowed two runs and three hits in seven innings, with one walk and seven strikeouts.

Ramon Laureano hit a two-run homer in the eighth inning and host Oakland defeated Baltimore to salvage the finale of the three-game series.

Mark Canha singled off reliever Travis Lakins (1-2) with two outs, and Laureano lined a 1-0 pitch to right center for his fifth homer of the season.

Matt Olson had a homer, double and single for Oakland. Yusmeiro Petit (4-0) pitched the eighth inning and Lou Trivino pitched the ninth for his fifth save. Trey Mancini drove in three runs and Austin Hays homered for the Orioles, who had won three straight.

Cesar Hernandez and Jose Ramirez homered to back a combined four-hit shutout from starter Zach Plesac and three relievers as visiting Cleveland earned a win against Chicago.

The Indians took two of three in the series while winning for the fifth time in seven games. Amed Rosario led Cleveland’s nine-hit attack by going 3-for-4 with an RBI, while Eddie Rosario, Hernandez and Ramirez collected two hits apiece.

The White Sox were blanked for the second time this season, both by Cleveland. None of Chicago’s hits went for extra bases. Andrew Vaughn singled twice.

Marcus Semien had a home run, a double and four RBIs as Toronto completed a three-game sweep of Atlanta.

Semien hit a two-run double in the third and a two-run homer in the eighth. Toronto has won three straight for the first time this season, and five of its last six.

Austin Riley went 4-for-4 to extend his hit streak to seven games for the Braves, who have lost four straight.

Martinez (2-4), in his longest outing of the year, gave up five hits and two walks and posted three strikeouts. Alex Reyes pitched a perfect ninth for his seventh save.

It was the Cardinals’ third series sweep.

Nick Castellanos hit two of the game’s 10 home runs and delivered a walk-off RBI single in the 10th inning for his fifth hit of the day, as Cincinnati outlasted visiting Chicago on Sunday.

According to ESPN, the most combined home runs in a 2021 game prior to Sunday was eight. Yet, it was the liner to center by Castellanos, a former Cubs player, off Chicago’s Craig Kimbrel (0-1) that broke the 12-12 tie and was the difference in a game that featured 30 hits and 15 pitchers.

Pinch hitter Manuel Margot drove in the go-ahead run in the seventh inning as Tampa Bay avoided a sweep with a win over Houston.

Jeffrey Springs (2-0), the Rays’ fourth pitcher, worked a scoreless inning and closer Diego Castillo struck out two in the ninth for his seventh save.

The Twins were aided by a wild pitch, a hit batsman, two Royals errors and another misplay that was ruled a hit in the decisive inning.

Garver was one of five batters with multiple hits for the Twins, who had 14 on the day and took two out of three games to win their first home series this season.

Pavin Smith homered, Daulton Varsho and David Peralta had two hits each and Arizona used a four-run rally in the bottom of the eighth to beat Colorado in Phoenix.

Stephen Vogt had a go-ahead triple in the eighth and starter Merrill Kelly allowed two runs on seven hits in 5 2/3 innings for Arizona.

Facing Colorado’s Daniel Bard (1-2) with a tied game in the eighth, Josh VanMeter walked, Peralta singled with one out and Vogt tripled to drive in both runners and give Arizona a 6-4 lead. Josh Rojas and Varsho followed with consecutive doubles to make it a four-run game and chase Bard.

Right-hander Rafael Montero pitched a 1-2-3 ninth for his fourth save of the season as the Mariners took two of three games in the series.

The only hits Sheffield (2-2) allowed were a leadoff single to Justin Upton in the second inning and a one-out single by Jared Walsh in the sixth.