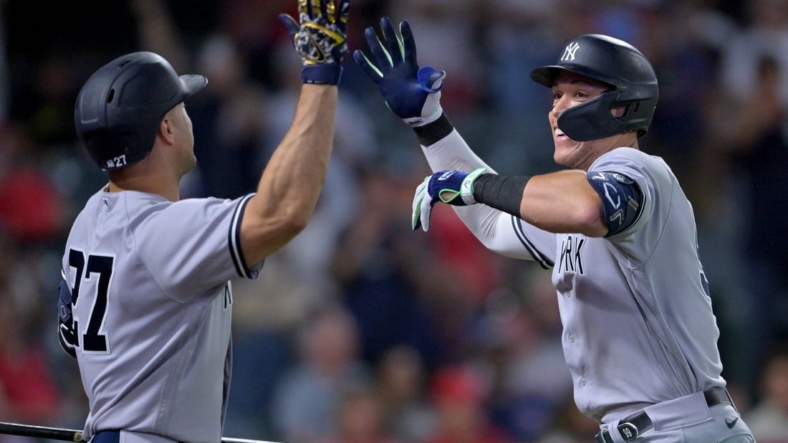 Shohei Ohtani hit a two-run home run as the Los Angeles Angels got the upper hand in the first round of a three-game MVP showdown, holding on to defeat the New York Yankees 4-3 on Monday in Anaheim, Calif.

Yankees MVP candidate Aaron Judge hit his own home run, his 50th of the season, but his chances were limited after he also was intentionally walked twice.

Ohtani recovered from a double-play grounder and a strikeout in his first two at-bats to go deep in the fifth inning. He added an infield single. Luis Rengifo and Mike Ford also hit home runs for the Angels.

Judge joined Babe Ruth (four times) and Mickey Mantle (twice) as the only players with multiple 50-homer years for the Yankees. Anthony Rizzo added a home run for New York, which lost its third consecutive game.

Freddie Freeman hit an RBI groundout in the top of the 10th inning and Chris Martin worked out of a bases-loaded jam in the bottom of the frame, leading Los Angeles to a win at Miami.

The Dodgers were also led by Will Smith, who hit his 19th homer of the season, a two-run shot. Prior to the game, the Dodgers scratched Cy Young Award candidate Tony Gonsolin, placing him on the injured list due to a strained right forearm.

Austin Nola chipped in with a two-run single for the Padres in a game that was delayed 40 minutes between the second and third innings because of a lights malfunction.

Clevinger (5-5) allowed a two-run homer to Joc Pederson but no other runs. Giants starter Carlos Rodon (12-7) was tagged for five runs in four innings.

Carson Kelly drove in four runs and Arizona overcame a seven-run deficit to post a victory over Philadelphia in Phoenix.

Corbin Carroll delivered a tiebreaking double in his major league debut for Arizona, which scored six runs in back-to-back innings for the first time in franchise history. Stone Garrett clubbed his second big-league homer for the Diamondbacks, who matched a season best with their fourth straight victory.

Kyle Schwarber hit his National League-leading 36th homer and knocked in four runs for Philadelphia. The loss was just the 10th in the past 32 games for the Phillies, but also the club’s second in a row.

Danny Jansen, who hit a three-run homer in the seventh inning, added an RBI single in the bottom of the 11th as Toronto defeated visiting Chicago.

Cubs right-hander Javier Assad, making his second major league start, allowed no runs, four hits and two walks in five innings. He struck out one while maintaining his 0.00 ERA through nine career innings.

Keston Hiura hit a two-run, walk-off home run in the ninth inning to lift Milwaukee to a win against visiting Pittsburgh in the opener of a three-game series.

Milwaukee’s Garrett Mitchell hit his first major league home run, a two-run shot with two outs in the eighth inning to tie the score 5-5. Hunter Renfroe had three hits and two RBIs and Willy Adames had three hits and scored twice for the Brewers, who ended a five-game losing streak against Pittsburgh.

Gio Urshela hit a bases-clearing, two-strike double with two outs in the fifth inning as Minnesota rallied from an early deficit and beat Boston in Minneapolis.

The Twins won their fourth straight on the heels of a six-game skid. Jake Cave drove in Minnesota’s first run with a sacrifice fly in the fourth off Boston rookie starter Brayan Bello (0-4) before Urshela came through against John Schreiber.

Alex Verdugo and Reese McGuire hit RBI doubles for the Red Sox, who went 2-for-10 with runners in scoring position and lost for the eighth time in 11 games.