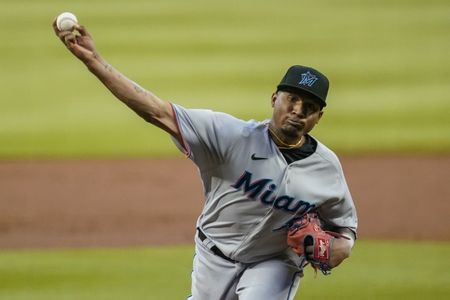 LOS ANGELES – Miami Marlins right-hander Sixto Sanchez has not been around long, but by the end of the day Thursday, he will have a rich history against the Atlanta Braves.

The 22-year old, with the shout-out-loud name and the 100 mph fastball, is scheduled to start Thursday in a win-or-go-home National League Division Series Game 3 for the Marlins at Houston’s Minute Made Park.

Sanchez, a top Marlins prospect, has only eight career outings after making his major league debut this season. Two of those starts came against the Braves, who have jumped out to a 2-0 lead in the NLDS.

Sanchez faced the Braves in his regular-season finale, and it was the shortest of the lot at three innings. He gave up four runs on four hits with four walks. He will look to emulate his Sept. 8 outing at Atlanta, when he went six scoreless innings and allowed three hits and one walk while striking out six.

Or perhaps he wants to match his five scoreless innings in his eighth appearance, against the Chicago Cubs in the wild-card round — an outing that makes him playoff-tested already. Sanchez dedicated that outing to his grandmother, who died from COVID-19 this summer.

“Every time I go out there, I look for the victory, and every victory is for my family,” Sanchez said. “Especially (against the Cubs), it was for my grandmother. I loved her very much.”

–The Houston Astros and Oakland Athletics have combined for 18 home runs in the first three games at Dodger Stadium, a ballpark that for most of its history had a reputation as a pitchers’ park. The teams hit seven Wednesday, with the A’s socking five.

Hot and dry conditions at the ballpark, just 16 miles from the Pacific Ocean, have forged a new identity, although day games have been far more hitter-friendly than night games, when the damp ocean air arrives.

There were signs that a series of day games could turn into a home run derby. The Dodgers and the Colorado Rockies combined for 10 home runs in a day game at Los Angeles on Aug. 23.

“I think everyone has kind of realized that as well as the ball is flying, the home runs will happen,” Oakland’s Jake Lamb said. “You gotta just think short and to the ball. Don’t try to do too much in those big situations.”

–The San Diego Padres might have lost proven right-handed starter Mike Clevinger for the remainder of the NLDS, and for a potential berth in the NL Championship Series, but they have been a bullpen team in these playoffs, anyway, having used at least eight pitchers in each of their first four playoff games.

Right-hander Dan Altavilla was added to the NLDS roster in place of Clevinger on Wednesday. Altavilla made nine relief appearances for the Padres after he was added in a trade-deadline deal with the San Diego Padres that also landed catcher Austin Nola. He came in and threw a scoreless inning Wednesday.

One of San Diego’s nine pitchers in Game 1 was 20-year-old left-hander Ryan Weathers, who was making his major league debut. Another 20-year-old, Luis Patino, also pitched Wednesday. Add in 21-year-old Adrian Morejon, and the Padres keep flaunting youth from all areas of the roster.

“I felt like I belonged out there,” Weathers said, who was making his first appearance above the Class-A level in Game 1. “I knew that I’d earned that moment.”

–The New York Yankees are not likely to settle on a catcher anytime soon with Gary Sanchez and Kyle Higashioka splitting time of late. When Higashioka started Game 3 on Wednesday against the Tampa Bay Rays, it gave him a slight 3-2 edge in games started behind home plate in the playoffs.

But Higashioka was 0-for-3 at the plate, and behind it, he could not help starter Masahiro Tanaka get on track. Tanaka gave up five runs on eight hits over four-plus innings, and the Yankees fell 8-4 to the Rays at Petco Park in San Diego.

Sanchez could end up starting in Game 4 with the Yankees in a win-or-go-home contest, down 2-1 in the best-of-five sereis.

“Gary’s had a rough year (and) it’s been a tough year for a lot of reasons,” teammate Brett Gardner said. “He’s one of the most dangerous hitters in the game, and at any point, things could click for him and he could really take off.”

–The Braves’ pitching staff has three shutouts in its first four playoff games, with two of those started by rookie Ian Anderson. The club will ask right-hander Kyle Wright to continue the trend in Game 3 of the NLDS. … Los Angeles Dodgers third baseman Justin Turner played in his 58th postseason game Wednesday, matching Yasiel Puig for the most in club history. He is also tied with Steve Garvey for most playoff hits in franchise history with 63. … The Tampa Bay Rays’ Randy Arozarena has a home run in all three games of the American League Division Series against the Yankees, the third Rays player ever to hit a home run in three consecutive playoff games after Evan Longoria and Carlos Pena, both in 2008. Longoria’s streak reached four games.