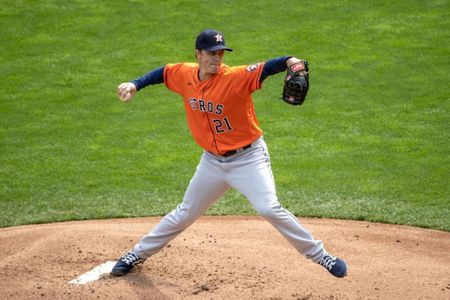 LOS ANGELES — Tuesday was a roller-coaster day for the Houston Astros, who are starting to look like a World Series contender after a disappointing regular season, but now they have concerns about a key member of the pitching staff.

Zack Greinke not only will miss his scheduled Game 3 start Wednesday against the Oakland Athletics in the American League Division Series, but “arm soreness” is causing concern about his availability for the rest of the playoffs and possibly beyond.

“I can’t really say right now,” Astros manager Dusty Baker said, when asked how long Greinke could be out. “He has some soreness in his arm. He went to see the doctors and we don’t have the results yet.”

Right-hander Jose Urquidy, who has 14 career regular-season appearances to his credit, 12 of them starts, will have the honor of pitching a potential series clincher Wednesday. The Astros took a 2-0 series lead with a 5-2 victory Tuesday, hitting three home runs for the second consecutive day.

Urquidy allowed one run in 4 1/3 innings during the Astros’ first-round series against the Minnesota Twins, lowering his career postseason ERA to 1.26 in five games (two starts).

–Future Hall of Famer Clayton Kershaw never has dominated the playoffs as he has the regular season, where the Los Angeles Dodgers left-hander has established his legacy.

Kershaw gets another chance to alter the narrative when he takes the mound in Game 2 of the National League Division Series against the San Diego Padres on Wednesday, and the game will be in the Dallas area, where he grew up.

Kershaw, who has a 4.22 ERA in 33 playoff appearances (26 starts), is coming off a stellar outing against the Milwaukee Brewers in the wild-card round, when he went eight scoreless innings and struck out 13.

“This whole thing is weird,” Kershaw said of the neutral-site NLDS. “It’s definitely different to be in Dallas and have to stay in a hotel and things like that. Both teams are dealing with it, and I’m not the only one with family in town. It’s even more reason to make it to the next round, so people can watch.”

–When right-hander Ian Anderson throws his first pitch for the Atlanta Braves in Game 2 against the Miami Marlins on Wednesday, one-fourth of his eight career starts will have come in playoff games.

Anderson, who made six regular-season starts as a rookie this year, will get the call again after he went six scoreless innings and fanned nine against the Cincinnati Reds in Game 2 of the wild-card round. Atlanta won that contest 5-0 to advance.

The 22-year-old, who was the No. 3 overall selection in the 2016 draft, faced the Marlins twice in his six regular-season outings, posting a 1.04 ERA over 8 2/3 innings, but the Braves lost both games.

“He’s got great stuff, and he’s also got the command to go with it,” Braves outfielder Adam Duvall said of Anderson. “He can throw three pitches for a strike.

–A day after becoming the first pitcher to make his major league debut in a playoff game, Tampa Bay Rays left-hander Shane McClanahan seemed most pleased that his father was there. Immediate family members are allowed to attend ALDS games at San Diego, where the Rays are opposing the New York Yankees.

Appearing in a mop-up situation with a runner on second and one out in the ninth inning, McClanahan gave up a hit to Brett Gardner, walked Kyle Higashioka to load the bases, then got American League batting champion DJ LeMahieu on a comebacker.

“My dad made me laugh a little bit. He goes, ‘3-2 walk, eh?’ Good to talk to you too, dad,” McClanahan said. “It was awesome to talk to them after the game and hear them tell me how proud they are. That was very fulfilling as a son.”

–The Miami Marlins took a pass on doing what the Rays did with McClanahan, as pitcher Edward Cabrera, 22, was left off the NLDS roster. The hard-throwing right-hander, who reached as high as Double-A last season, is on the 40-man roster. … The A’s went 0-for-6 with runners in scoring position in Game 1 of their ALDS series and did not have a runner in scoring position in Game 2, getting two home runs and spreading out four singles and a walk. They have been outscored by eight runs. … Right-hander Masahiro Tanaka, who is scheduled to start Game 3 for the Yankees on Wednesday, is 5-3 lifetime in the postseason with a 2.70 ERA in nine starts. He is 3-0 with a 1.06 ERA in three ALDS starts.