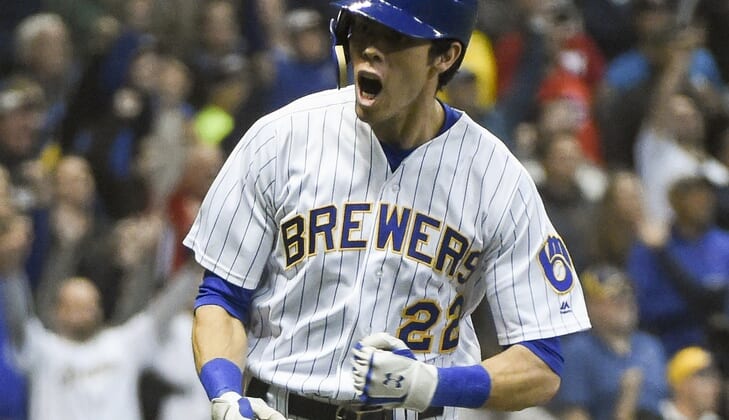 While some big-name players have struggled in the early part of the 2019 MLB season, others have made it their own.

Defending American League MVP Mookie Betts has struggled. That’s true for many of his teammates. But one member of the Boston Red Sox has consistently performed. And while Betts has struggled, the reigning National League MVP has not. In Southern California, one star is right in his normal place as an MVP candidate. Another is in that spot because he’s turned some serious corners.

Through the opening weeks of the 2019 MLB season, these players have thrown their names in the MVP races of their respective leagues.

Note: All stats are accurate through play on Monday, April 22.

The Dodgers are 15-9 and lead the NL West. And it’s not as though everything has gone smoothly. While they haven’t had terrible starts to the year, guys like A.J. Pollock, Corey Seager, Justin Turner, and Max Muncy have all dealt with some inconsistencies at the plate. But Bellinger has more than made up for their struggles. He is simply making life miserable on anyone who has to face him. He’s hitting .424/.500/.882 with 11 home runs, and four stolen bases. If you bump into any of the pitchers lined up to face Bellinger, wish them luck. They’ll need a lot of it.

Martinez has been one of baseball’s best hitters over the last two seasons. And 2019 has been no different. His four home runs don’t place him among the league leaders. Even still, Martinez is hitting .350/.441/.563. So, even if the ball isn’t leaving the yard at a prodigious rate, Martinez is absolutely raking. Martinez’s stats are even more notable given the struggles of his team. By and large, it’s been a rough April for the Red Sox. But Martinez’s exploits have done a lot to keep this team from getting buried. It’s hard to get more valuable than that.

Losing Bryce Harper was always going to make things hard on the Washington offense. But the Nats have maintained a decent clip this season. Rendon has had a lot to do with that. He’s hitting .371/.451/.771 with six home runs. And his strong start has done more than just help the team. As a pending free agent, an MVP-caliber season would only help him net a big contract at the end of the season (assuming a big extension doesn’t come first). Rendon’s April has only aided that cause.

Santana hit 30 homers for the Milwaukee Brewers 2017, but the acquisitions of Lorenzo Cain and Christian Yelich made him the odd man out in 2018. Now Santana is getting everyday at-bats in Seattle in 2019 and really showing why he was a budding young star two years ago. The left fielder is hitting .317/.384/.614 with five home runs and three steals. The Mariners have been one of MLB’s most pleasant surprises through the early part of the season. In no small part, this is due to a record-setting offense. Santana has done a lot to spark that.

Contreras is hitting .321/.465/.893 with six home runs. That’s two more home runs with a higher OBP and a much higher slugging percentage than Martinez in Boston. Now, remember that Martinez is a DH. Contreras has put those numbers up despite playing catcher — the most physically demanding position on the field. Of course, we understand that they don’t play in the same league and aren’t competing for the same award. But if Martinez is a viable MVP candidate in the AL (which he absolutely is), Contreras’ candidacy in the NL is even stronger.

Chapman has been a good hitter for his entire career. But that’s been overshadowed by two things. One is his own glove. The second is Khris Davis’ power. Chapman’s glove and Davis’ power haven’t exactly gone anywhere. But his offense has kept up. He’s hitting .313/.398/.590, which has really provided stability in the Oakland offense. With six home runs, he’s not exactly a slouch in the power department, either. Few players can maintain that kind supply that kind of offense while playing Gold Glove-caliber defense. Anyone who can is a prime MVP candidate.

April has been very good to Alonso, who’s been a sparkplug for New York. He’s hitting .325/.419/.725 with eight home runs. Those contributions have really helped the Mets stay near the top of a very crowded NL East race. We can’t say that Alonso playing well is completely surprising. He was a prime NL Rookie of the Year candidate entering the season, after all. Through the early weeks of the season, he remains in that race. But based on what we’ve seen so far, the Rookie of the Year isn’t the only award he’s looking for.

Anderson was front-and-center for one of the most controversial incidents of the young season. But that shouldn’t distract anyone from the fact that he’s also been one of the season’s best players. He’s always had a great deal of potential. But in the past, high strikeout totals have kept him from reaching his potential. Entering 2019, Anderson struck out in 27.4% of his at-bats. In 2019, he’s cut that down to 19.4% while still hitting .403/.427/.625 with four home runs. The strikeout rate is still a little on the high side, but it’s much more manageable. The results back that up.

The drawback of Yelich finishing 2018 so well is that maintaining that level of play entering 2019 appeared impossible. In this case, appearances were deceiving. Yelich is hitting .337/.439/.820 with 13 home runs. That puts him on pace to hit 89 on the season. Of course we don’t expect him to maintain that clip through the end of the season. But while it is early, we’re past the point of the season where a good couple of games can blow those paces out of whack. Just like he was last year, Yelich has been arguably MLB’s best player in 2019.

Trout being an MVP candidate has become commonplace. This year is no different. As his 22 walks and .523 OBP tell us, pitchers aren’t exactly lining up to face Trout. Still, he’s hitting .328, slugging .689, has six home runs, and four doubles. Opportunities to swing the bat come few and far between. But when Trout gets that opportunity, he’s not missing many chances to do damage. On top of that, Trout is playing his usual stellar defense. It’s another great year for the best player that anyone has ever seen in a long time.