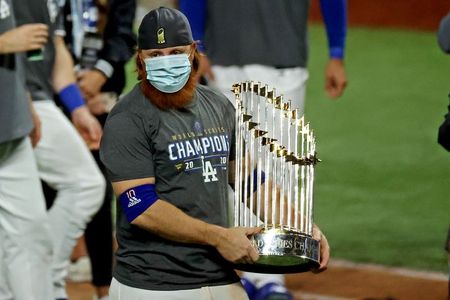 Turner was removed from the field during the eighth inning and placed in isolation after MLB said it learned mid-game that he had tested positive for the coronavirus, which has ravaged the United States and claimed more than 220,000 lives across the country.

The 35-year-old returned to the field after their 3-1 win over the Tampa Bay Rays, offering hugs in the dugout, posing with the Commissioner’s Trophy, and removing his mask while bunched together with team mates for a photograph.

“Turner chose to disregard the agreed-upon joint protocols and the instructions he was given regarding the safety and protection of others,” MLB said in a statement.

“While a desire to celebrate is understandable, Turner’s decision to leave isolation and enter the field was wrong and put everyone he came in contact with at risk.

“When MLB Security raised the matter of being on the field with Turner, he emphatically refused to comply.”

The Dodgers did not immediately respond to a request for comment.

MLB said it was opening an investigation into the incident. It was not immediately clear what, if any, disciplinary action Turner or his team would face.

“Last night, nasal swabs were conducted on the Dodgers’ traveling party,” MLB said. “Both the Rays and Dodgers were tested again today and their travel back to their home cities will be determined after being approved by the appropriate authorities.”

The World Series capped a truncated and tumultuous season for MLB, which put its schedule on hold for weeks due to the pandemic and had numerous players and support staff test positive for COVID-19 after games started in July.