MJ Morris leads No. 22 North Carolina State to win over No. 21 Wake Forest 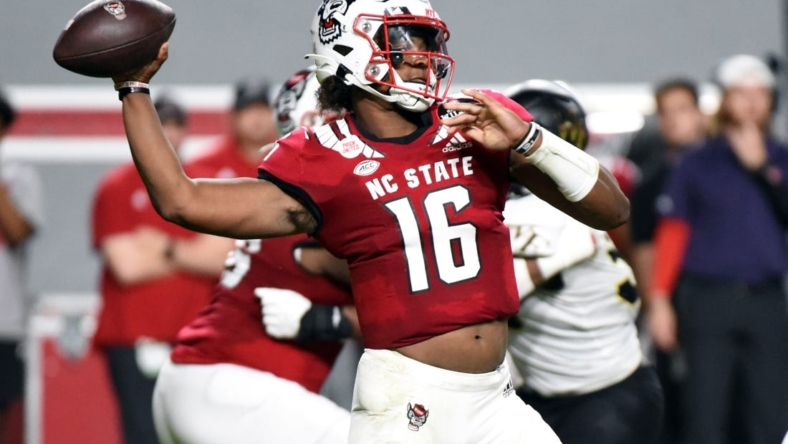 MJ Morris, who was the third-string quarterback a few weeks ago, threw three touchdown passes as No. 22 North Carolina State defeated No. 21 Wake Forest 30-21 for a victory Saturday night in Raleigh, N.C.

Darryl Jones caught two of the touchdown passes and Keyon Lesane had the other scoring catch.

NC State’s Christopher Dunn kicked field goals of 33, 51 and 25 yards. He had the game’s first and final points.

Wake Forest quarterback Sam Hartman threw two touchdown passes and was intercepted three times. But his 29-yard, fourth-down hook-up with A.T. Perry allowed the Demon Deacons to close within 27-21 with 6:54 remaining by completing a 99-yard drive.

Hartman finished 29-for-47 for 397 yards. The Demon Deacons, who lost their second game in a row, were held to 17 rushing yards.

Jakeem Harris intercepted Hartman in the first quarter and Cyrus Fagan and Aydan White had pickoffs in the second half.

Morris made two touchdown throws in the last eight minutes of the first half.

He threw 12 yards to Lesane, who held onto the ball despite a brutal hit at the goal line, for the Wolfpack’s first touchdown.

Hartman hooked up with Taylor Morin for a 24-yard touchdown play 3 1/2 minutes later. Then it was Morris’ turn again, with a 13-yard pass to Jones with 1:30 to play in the first half.