MJ Melendez one of many stars as Royals drub Red Sox 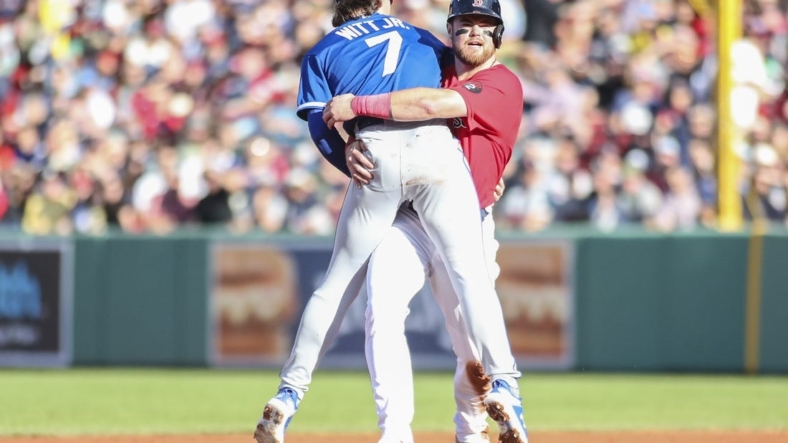 Leadoff-hitting catcher MJ Melendez went 3-for-5 with a double, two RBI and four runs scored as the Kansas City Royals cruised to a 9-0 win over the host Boston Red Sox on Saturday.

Brady Singer (9-4) worked six innings in his second consecutive scoreless start for the Royals (58-88), who had lost their previous four games. Singer struck out five and allowed just five hits and a walk.

Enrique Hernandez and Christian Arroyo had two hits apiece as Boston (70-75) lost for the third time in four games.

Boston starter Rich Hill (7-7) was charged with four runs on eight hits and struck out four over 4 2/3 innings.

Hill retired seven of the first eight batters he faced, with the lone hit during that span coming in the form of Salvador Perez’s two-out single in the first inning.

Kansas City jumped out to a 2-0 lead in the third. Melendez lined the go-ahead single into right field to score Nate Eaton, who hit a one-out infield single and stole second.

After a groundout by Bobby Witt Jr. moved Melendez into scoring position, Perez sent a single through to the base of the Green Monster in center to make it 2-0.

During the next half-inning, the Red Sox looked to threaten immediately as Hernandez and Connor Wong singled in between a walk to Yu Chang, but Singer retired the next three batters to escape without any damage done.

The Royals chased Hill with two down in the fifth after Witt lined a one-out single inside third base and Pasquantino dropped a run-scoring hit into right that was misplayed by Boston’s Alex Verdugo in the sun for a double. Ryan Brasier relieved Hill and got out of the inning in one batter.

In the sixth, Franklin German — who was making his MLB debut — loaded the bases on a single and two walks before Eaton’s single RBI single started a four-run frame. Witt and Pasquantino singled off Eduard Bazardo to extend the Royals’ lead to eight before the end of the inning.

Pasquantino added a run-scoring single to right in the eighth.