When the Kansas City Chiefs lost offensive tackle Mitchell Schwartz to a back injury, it was a monumental blow for Patrick Mahomes and Co. Kansas City has since overhauled its offensive line, but Schwartz remains an NFL free agent following his March release.

If Schwartz makes a full recovery and is cleared for the start of the 2021 NFL season, he should be on every general manager’s radar. Let’s examine the best landing spots for the All-Pro offensive tackle.

The Pittsburgh Steelers are no stranger to linemen with durability concerns. While this front office will certainly weigh that risk, especially in light of the David DeCastro release, Schwartz is a player worth gambling on for a team in win-now mode. 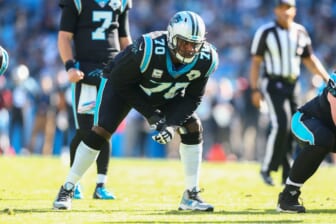 Entering training camp, Pittsburgh has just one returning starter on its offensive line and the entire group leaves a lot to be desired. Ben Roethlisberger really declined as he racked up the hits late in the 2020 season. Just as problematic, the Steelers’ offense was forced to resort to a short, quick passing game just to keep Big Ben upright.

Schwartz has never played left tackle in his career and Pittsburgh should play him where he’s comfortable. The 32-year-old’s resume speaks for itself, with multiple All-Pro selections prior to 2020. Adding Trai Turner is a solid move, but signing Schwartz would give us a lot more confidence in this offense in the fall.

The easiest way to ruin a franchise quarterback and generational talent is putting him in a situation where he gets hit relentlessly. Quite frankly, while the Jacksonville Jaguars don’t have the worst offensive line in the NFL, this isn’t exactly a group we trust to protect Trevor Lawrence.

Jawaan Taylor is set to begin the season as the Jaguars’ right tackle. A second-round pick in 2019, he has shown flashes in his brief NFL career. But through two seasons, per Pro Football Focus, Taylor surrendered 58 pressures and committed 20 penalties, all while allowing eight-plus sacks each year.

Let’s compare that to Schwartz. He gave up eight pressures and two sacks in six games last year, with the back injury responsible for his woes. Before that, Schwartz allowed a combined 73 pressures, six sacks and committed 14 penalties from 2017-’19. If Urban Meyer is serious about this team being competitive, Schwartz is the answer.

Chicago finally started overhauling its offense this spring. While we question the decision to guarantee Andy Dalton the starting job and view the Bears’ confidence in him as foolish, it won’t be long before Justin Fields steals the gig. Once the franchise quarterback is under center, Chicago should have an offensive line that can protect him.

Germain Ifedi, the projected starter at right tackle, is not reliable. The Seattle Seahawks tried to make it work with him at tackle and it rarely worked out. He allowed 50 pressures and six sacks during the 2019 season, becoming a turnstile on the right side. Just as alarming, he was a huge liability as a run blocker.

These are things the Bears simply can’t afford to have, especially with a coach and general manager operating with their jobs on the line. If Schwartz receives medical clearance, Chicago must do everything possible to sign him this summer.