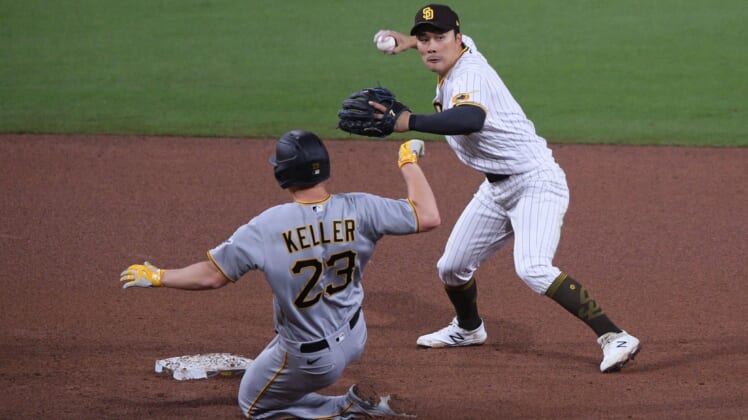 Mitch Keller, who entered the game with a 8.20 ERA, pitched 5 2/3 scoreless innings Tuesday night, leading the visiting Pittsburgh Pirates to a 2-1 win over the San Diego Padres.

Bryan Reynolds drove in the Pirates’ first run with a third-inning double, and Erik Gonzalez raced home from second on a grounder in the sixth for what turned out to be the decisive run.

The Padres, who were no-hit for six innings Monday night before rallying for a 2-0 victory, have scored three runs on just seven hits in the first two games of the three-game series.

The Pirates snapped a five-game losing streak as five pitchers combined to hold the Padres to four hits. Richard Rodriguez picked up his fifth save with a 1-2-3 ninth.

The Padres didn’t decide on a starting pitcher between Dinelson Lamet and Ryan Weathers until hours before game time. Lamet, who came off the injured list, worked the first two innings, allowing four hits but no runs. Weathers (1-1) handled the next three innings and took the loss, allowing a run on four hits.

Adam Frazier doubled to open the third against Weathers and scored on Reynolds’ double to left-center.

Pittsburgh’s second run came off Keone Kela. Gonzalez singled with one out in the sixth and stole second. Jacob Stallings then hit a grounder to second baseman Cronenworth, who tossed to first. However, first baseman Eric Hosmer pulled his foot early and as he came off the bag, and Gonzalez kept running and scored, beating Hosmer’s wide throw.

Wil Myers singled off former Padres reliever David Bednar to open the eighth. He moved to second on a groundout and scored on Austin Nola’s single.