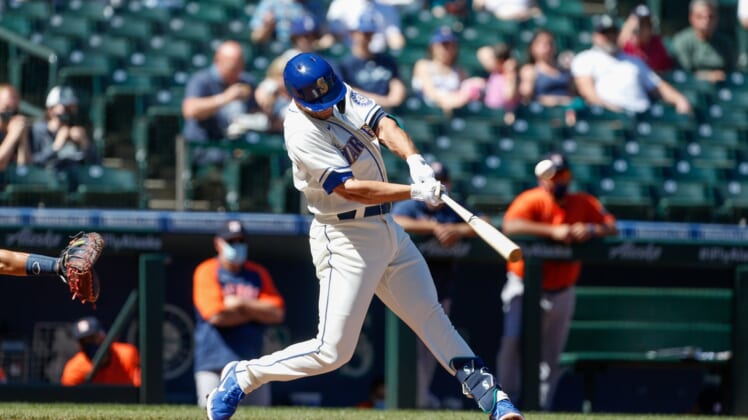 Mitch Haniger had a double, triple and three RBIs and six Seattle pitchers combined on a one-hitter as the Mariners defeated the visiting Houston Astros 7-2 Sunday afternoon.

The only hit for the short-handed Astros was a sun-aided, ground-rule double by Aledmys Diaz in the second inning. With no outs and a runner — who reached on an error — at second base, Diaz hit a fly ball into deep left-center that left fielder Jose Marmolejos lost in the sun, the ball bouncing off the warning track and over the fence to score a run.

Mariners starter Nick Margevicius didn’t allow another baserunner before having to leave with an apparent left arm injury in the fifth.

Margevicius allowed two runs (one earned) on the one hit, with one walk and three strikeouts.

Facing the Astros’ Chas McCormick leading off the fifth, Margevicius threw a pitch in the dirt and one nearly over catcher Tom Murphy’s head before getting a called strike. Another pitch that nearly sailed over Murphy was the last that Margevicius threw, with Murphy coming out to the mound followed by a trainer and Mariners manager Scott Servais.

McCormick stole second off Newsome, moved to third on a flyout and scored on a sacrifice fly by Myles Straw to give Houston a 2-1 advantage.

The Mariners scored four times in the bottom of the fifth to take the lead for good. The key hit was Haniger’s two-run triple, which went off the heel of center fielder Straw’s glove as he tried to make an over-the-shoulder catch in front of the wall in the deepest part of the park.

Haniger and France added run-scoring doubles in the seventh.