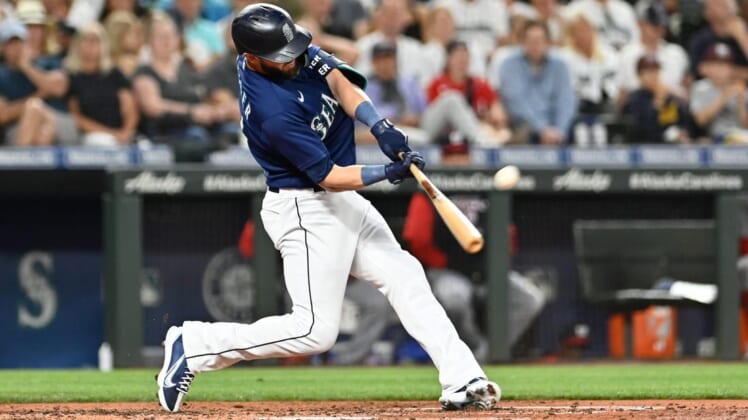 Mitch Haniger will attempt to homer in a third straight game when the Seattle Mariners close a two-game set against the visiting Washington Nationals on Wednesday afternoon.

Seattle posted a 4-2 victory on Tuesday and will look to complete a four-game season sweep of the Nationals.

Haniger played in just one game in more than 3 1/2 months, sidelined initially due to a bout with COVID-19 and then sustaining a serious ankle injury in his first game back on the field.

In the eyes of Seattle manager Scott Servais, the right fielder is now swinging the bat the way he did last season when he established career bests of 39 homers and 100 RBIs.

“Haniger continues to roll since he came back,” Servais said after the Tuesday win. “We missed him. He was out a long, long time. He kind of changes the whole dynamic of our lineup, no matter where he’s hitting in it. People pay attention to him, and they should.”

Haniger and Eugenio Suarez hit two-run homers to account for all the Mariners’ runs in the series opener. Haniger’s blast, his sixth of the season, gave Seattle a 2-0 lead in the fourth inning.

“I put a good swing on it,” Haniger said of his long ball off Erick Fedde. “I got a pitch to drive.”

Suarez’s homer was his 23rd of the season. He has smacked four in the past five games.

The Mariners have won eight of their past 12 games entering the finale, while Washington has dropped three straight games and 18 of its past 25.

The Nationals have scored just four runs total in the three consecutive setbacks.

Washington was hitless for six innings against Seattle’s Robbie Ray on Tuesday before Joey Meneses led off the top of the seventh with a homer over the center field fence.

Meneses also doubled in the ninth. The 30-year-old rookie first baseman/outfielder is batting .329 with six homers and eight RBIs in 18 games since being promoted from Triple-A Rochester following the trade of Juan Soto and Josh Bell to the San Diego Padres.

Kirby, a rookie, has won three consecutive starts while striking out 20 and walking two in 17 1/3 innings during that stretch. He beat the Los Angeles Angels on Aug. 17 when he gave up three runs and six hits over 5 2/3 innings.

Kirby has fanned 93 in 90 2/3 innings over 17 starts. He is unbeaten in his past seven starts, last losing on June 27 to the Baltimore Orioles. Kirby has never faced the Nationals.

Sanchez has received no-decisions in his last two turns after losing each of his first five starts following his return from a neck injury. He made his season debut on July 14.

The 38-year-old veteran pitched well in his last outing as he gave up one run and one hit (a homer by Manny Machado) in five innings against the Padres. He has struggled with the long ball, serving up 11 in just 35 innings.