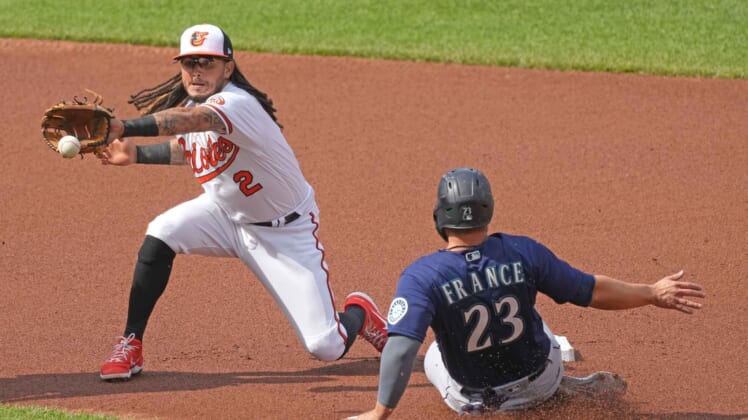 Dunn (1-0) allowed just one run on two hits, with two walks and six strikeouts. The right-hander, who walked eight in his season debut against the Chicago White Sox, was replaced after allowing a leadoff base on balls to DJ Stewart in the bottom of the sixth.

Right-hander Will Vest entered and a passed ball by catcher Tom Murphy allowed Stewart to reach second. Anthony Santander hit a line drive back to the mound and Vest was able to catch the ball and double off Stewart at second. Trey Mancini grounded out to second to end the inning.

Right-hander Keynan Middleton allowed a two-out single to Rio Ruiz in the seventh, but got Freddy Galvis to ground out to earn his second save of the season.

Haniger broke a 1-1 tie with a solo homer run to center field with two outs in the fifth inning off Baltimore left-hander Bruce Zimmermann (1-1).

Seattle’s Dylan Moore, who broke an 0-for-17 slump in the opener, hit Zimmerman’s first pitch of the third inning over the fence in left-center field to give the Mariners a 1-0 lead.

The Orioles tied it as Galvis led off the bottom of the inning by hitting a 1-2 pitch from Dunn over the wall in right.

Haniger also homered in the opener, a two-run shot, as the Mariners won 4-2.

After players from both teams wore No. 42 in the opener to celebrate Jackie Robinson Day, they donned their regular jerseys in the nightcap.