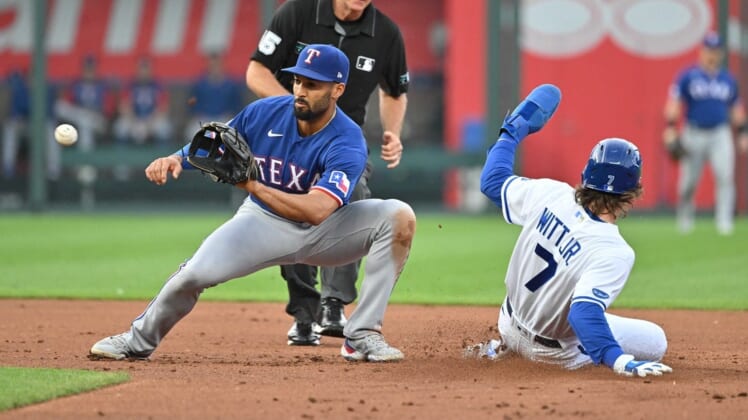 Mitch Garver had two hits, including a home run, with two RBIs and two runs as the Texas Rangers knocked off the Royals in Kansas City, 10-4, on Monday night.

Martin Perez (6-2) earned the victory. He struggled early but finally found a groove. He allowed four runs on seven hits, with two walks and six strikeouts in six innings.

The Royals plated the first run in the first. Whit Merrifield and Andrew Benintendi reached on infield singles to open the inning. Bobby Witt Jr. then grounded into a fielder’s choice, scoring Merrifield.

The lead didn’t last long as the Rangers scored four in the second, including one unearned run. The first six batters reached safely, including two walks and an error. One of the walks, to Nathaniel Lowe, forced in a run, and Leody Taveras’ two-run single drove in the next two. The fourth run scored on Corey Seager’s groundout to first.

The Royals tied it in the bottom of the second. Merrifield drove in a pair of runs with a two-out double, scoring Michael A. Taylor and Emmanuel Rivera. Merrifield then scored on Benintendi’s single.

Another error hurt the Royals in the fourth. Taveras led off with a slow roller up the line. Bubic threw it into right field and Taveras went to second. He went to third on a wild pitch and scored an unearned run on Semien’s sacrifice fly.

Garver gave the Rangers another three-run cushion with a two-run home run in the fifth, scoring Calhoun and ending Bubic’s night.