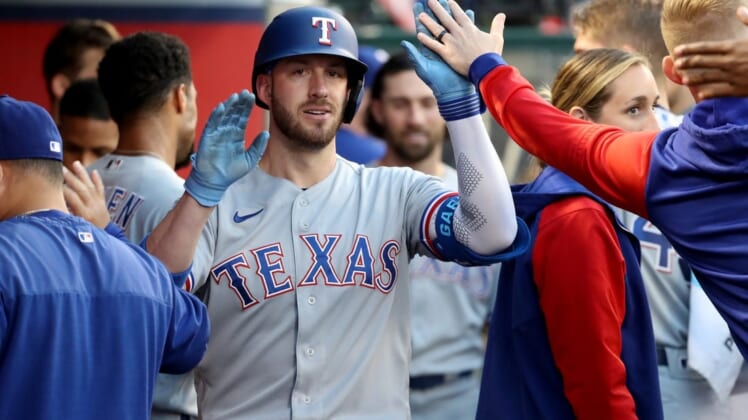 Mitch Garver and Kole Calhoun homered and Glenn Otto threw five effective innings to lead the Texas Rangers to a 7-2 victory over the Los Angeles Angels on Wednesday night in Anaheim, Calif.

Garver and Calhoun both have been hot lately — Garver has homered in three consecutive games and Calhoun has six long balls in his past 10 games. Calhoun also singled, doubled, scored three runs and drove in two.

Garver, the club’s starting catcher to begin the season, only recently returned from an injured-list stint prompted by a strained forearm. The injury likely will keep him in the DH spot the rest of the season.

He has hit safely in five consecutive games, going 6-for-19 (.318) during that stretch.

Otto had trouble keeping his pitch count down, coming out of the game after making 87 pitches in five innings. However, he was effective, giving up just one run on three hits and two walks while striking out seven, including getting Mike Trout twice on strikeouts. Trout fanned on all four of his at-bats in the game.

The Rangers pushed across a run in the top of the first inning against Angels starter Reid Detmers (2-2). Marcus Semien led off with a single, stole second, took third on Corey Seager’s groundout and scored on a sacrifice fly by Garver.

The Angels matched the run in the bottom of the first against Otto in much the same way. Leadoff hitter Shohei Ohtani walked, stole second and scored on Anthony Rendon’s two-out single to tie the game at 1-1.

It stayed that way until the fourth when Garver led off the inning with a home run. After a walk to Jonah Heim, Calhoun, an ex-Angel, hit a two-run homer for a 4-1 Rangers lead.

Detmers, though, hung around, retiring the Rangers in order in the fifth and sixth innings. He exited after allowing a leadoff single to Calhoun in the seventh. Detmers yielded five runs on five hits and a walk with three strikeouts.

The Rangers’ offense kept it going against the Angels’ bullpen in the seventh, getting a sacrifice fly from Semien and an RBI single from Seager to increase the lead to 6-1.

Brad Miller’s RBI single in the eighth inning made it 7-1, and Jared Walsh singled and came around to score for the Angels in the ninth for their second run of the game.