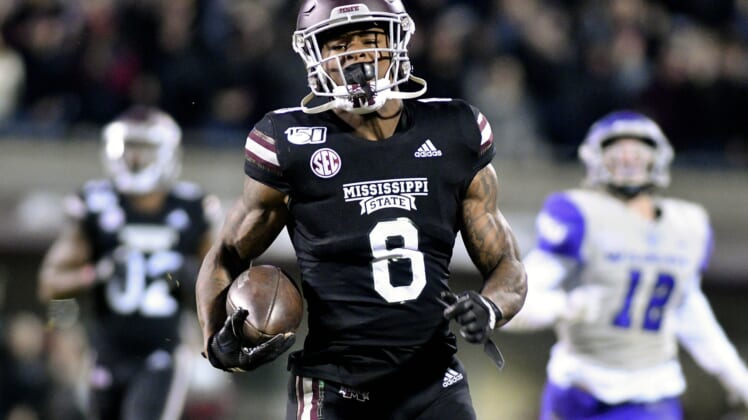 The flag of Mississippi bears an emblem of the Confederate flag, which has many calling for the state to change it. Now Mississippi State football star Kylin Hill has joined the growing chorus of calls for a change.

Taking to Twitter Monday, Hill wrote, “Either change the flag or I won’t be representing this State anymore & I meant that .. I’m tired.”

The Bulldogs would certainly miss Hill if the state doesn’t change the flag and he does in fact leave. Last season as a junior, he racked up big-time stats rushing for 1,530 yards and 11 touchdowns from scrimmage.

Hill’s tweet was in direct response to Mississippi Governor Tate Reeves, who shared his own message on Twitter Monday. In his statement, Reeves wrote that, “I have repeatedly warned my fellow Mississippians that any attempt to change the current Mississippi flag by a few politicians in the Capitol will be met with much contempt.”

Afterward, Reeves blamed “leadership in 2001” and disregarded any idea of creating a second Mississippi flag, writing, “While well-intentioned I’m sure, it does not meet the threshold.”

Hill is far from the only high-profile figure taking a stand against the Mississippi flag due to the emblem of the Confederate flag.

In fact, the NCAA itself, along with SEC and Conference USA, has declared there will be no postseason play in the state of Mississippi until the flag is changed, per the Clarion Ledger.

As the Black Lives Matter movement has gained momentum this past month, major changes have occurred in America. One of them was that NASCAR, which operates a ton in the South, banned the Confederate flag from all events.

Many fans support the ban, while others do not. One driver threatened to quit. Since then, Bubba Wallace was targeted by someone who hung a noose in his garage at Talladega.