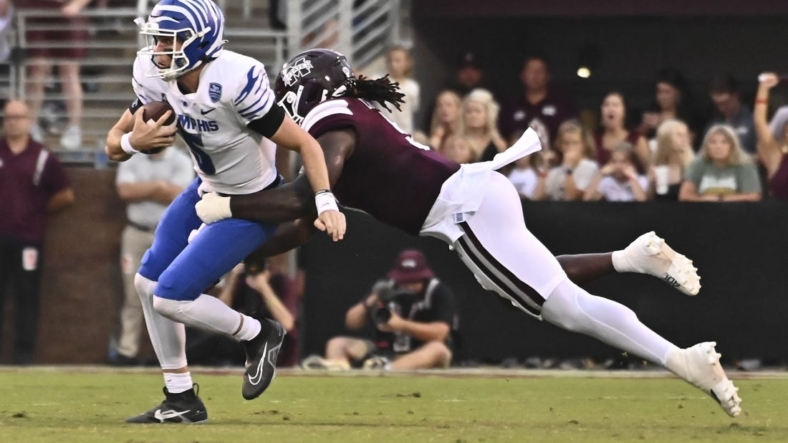 Rogers completed 38 of 49 passes for a career-high 450 yards and one interception. Twelve different players caught at least one pass for the hosts.

Seth Henigan tossed one touchdown pass and rushed for another while Jay Ducker rushed 50 yards for a score for the Tigers.

Mississippi State (1-0) took the opening drive and marched 75 yards in 10 plays with Rogers tossing a 23-yard touchdown pass to Rara Thomas for a quick 7-0 lead.

With 5:17 left in the first quarter, the game was delayed because of lightning in the area.

Though the game was delayed for 2 hours and 16 minutes, the Bulldogs came back from the locker room and went ahead 14-0 following a successful second drive. Rogers connected with Jaden Walley from 9 yards out with 53 seconds remaining in the first quarter.

Following an interception by Quindell Johnson, Memphis (0-1) was able to cut into the deficit with a 42-yard field goal by Chris Howard.

Mississippi State immediately responded and traveled 61 yards in nine plays capped by a 1-yard touchdown by Marks for a 21-3 lead with 10 minutes left in the second.

Memphis’ Greg Rubin was called for two penalties in the red zone and the Bulldogs took advantage on a 14-play drive by scoring on their fourth straight possession. Marks plunged in from the 2-yard line for a 28-3 lead with 1:40 to go in the second.

When Rogers tossed a 35-yard touchdown to Caleb Ducking with 10:48 remaining in the third, the Bulldogs led 35-3.

The Tigers closed within 35-10 when Ducker, a transfer from Northern Illinois, scampered 50 yards for a score on their ensuing possession.

After recovering a fumble early in the fourth, Memphis capitalized as Henigan threw a 15-yard touchdown pass to Eddie Lewis. The two-point conversion failed and the visitors trailed 35-16 with 10:13 left.

The Bulldogs then went ahead 42-16 when Rogers threw his fourth touchdown pass with 5:59 remaining, a 33-yard strike to Rufus Harvey.