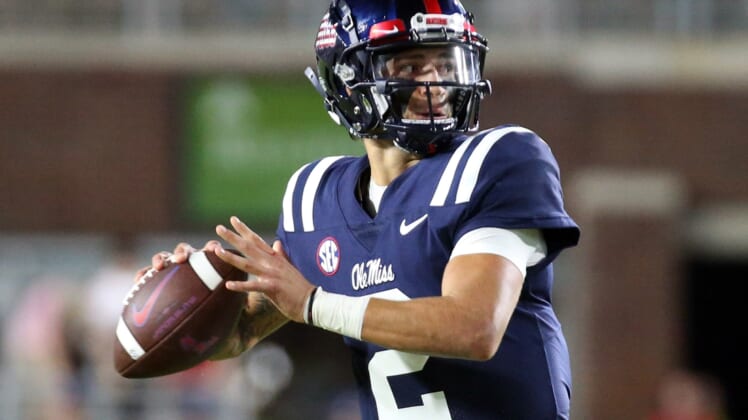 After a five-touchdown game on Saturday, Ole Miss quarterback Matt Corral continued his climb up the list of Heisman Trophy favorites as his Oklahoma counterpart, Spencer Rattler, tumbled again.

Still, both trail Alabama sophomore quarterback Bryce Young, who led the Crimson Tide (2-0) to a 48-14 victory against Mercer. He completed 19 of 27 passes for 227 yards and three touchdowns.

After Ole Miss’ Week 1 win over Louisville, Corral was offered at +1000 by PointsBet. Following Week 2, the odds shortened to +600 at both PointsBet and BetMGM.

Oklahoma’s Rattler, the preseason favorite, saw his odds lengthen again despite the Sooners’ 76-0 thumping of Western Carolina. Rattler was 20-of-26 passing for 243 yards and five touchdowns before calling it a day.

The only other player within striking distance after Week 2 is Ohio State quarterback C.J. Stroud, who is at +1100 at BetMGM and +1300 at PointsBet.

Ohio State fell to No. 9 in the AP Top 25 poll with a loss to Oregon on Saturday. Still, Stroud had a stellar day, passing for 484 yards and three touchdowns with an interception.

Stroud was named the Big Ten’s Freshman of the Week for the second consecutive week and has thrown for 778 yards and seven touchdowns through his first two games.