Minus their star, Bucks have plenty left to defeat Thunder 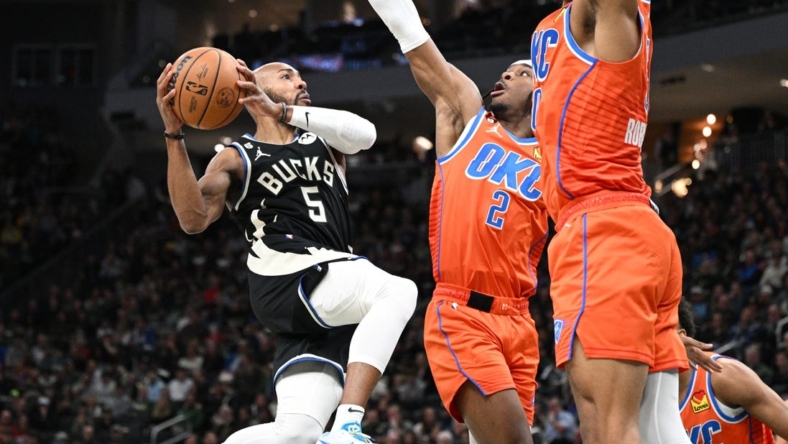 Brook Lopez scored 25 points and Bobby Portis had 12 points and a career-high 21 rebounds to help the Milwaukee Bucks stay undefeated with a 108-94 win over the visiting Oklahoma City Thunder on Saturday.

The Bucks extended their franchise record for consecutive wins to start the season to nine, while the Thunder lost their second consecutive game.

Coming off his triple-double performance in Friday’s win over Minnesota, Bucks star Giannis Antetokounmpo missed the game with left knee soreness. But Lopez and Portis helped fill the void.

Portis had 10 of his rebounds in the second quarter — four of them on the offensive end — when Milwaukee outscored the Thunder 33-19.

Portis hadn’t had more than 16 rebounds in his 461-game career. The double-double was his fifth of the season.

After trailing by eight early, Grayson Allen fueled a quick 10-0 run late in the first quarter to stabilize Milwaukee.

Allen scored eight consecutive points — including two 3-pointers — then grabbed a rebound that eventually led to another bucket.

Then another bench player, Jordan Nwora, had seven consecutive points early in the second to help the Bucks take the lead for good.

Allen finished with a season-high 19 points, while Nwora equalled his season-high with 12. Lopez was 10 of 16 from the floor to reach a season high in scoring.

Carter hit a pair of 3-pointers in the quarter to help the Bucks extend their lead to 24.

When the Thunder threatened to get back into the game, cutting the deficit to 10 in the fourth quarter, Lopez scored seven quick points — all three of the buckets assisted by Holiday — to put the game out of reach.

Shai Gilgeous-Alexander led the Thunder with 18 points on 7-of-16 shooting. Josh Giddey scored 15 for Oklahoma City.