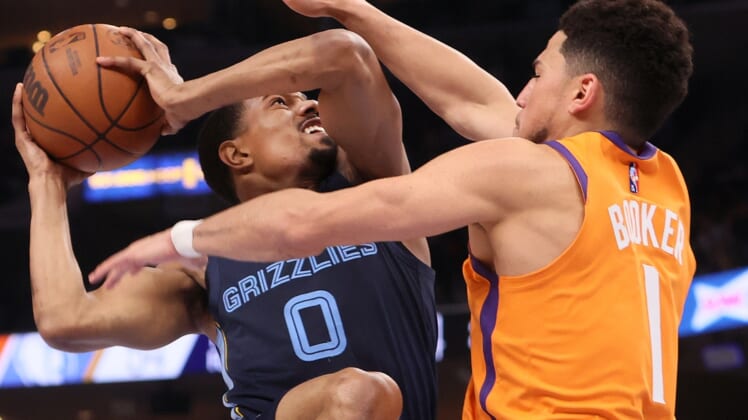 Dillon Brooks collected 30 points and seven assists to fuel the short-handed Memphis Grizzlies to a 122-114 victory over the visiting Phoenix Suns on Friday night.

Memphis held a decisive 16-2 edge in offensive rebounds and took advantage of 20 turnovers by Phoenix.

Mikal Bridges added 18 points in a losing effort for the Suns.

Despite being short-handed, the Grizzlies jumped out to a 30-14 lead before the Suns slowly chipped away and got within 84-83 at the end of the third quarter.

Undaunted, Memphis scored 13 straight points in one sequence to secure a 101-87 lead with 6:32 remaining in the fourth quarter.

Booker drained a 3-pointer to trim the Grizzlies’ lead to 111-106 with 56 seconds to play. However, Brooks countered with a three-point play on the ensuing possession.

The teams traded baskets before Melton effectively sealed the win by making all six of his free throws down the stretch.

Grizzlies coach Taylor Jenkins was ejected after yelling in the direction of official Natalie Sago with 4:12 to play in the second quarter. Memphis, however, managed to hold a 54-50 lead at halftime.