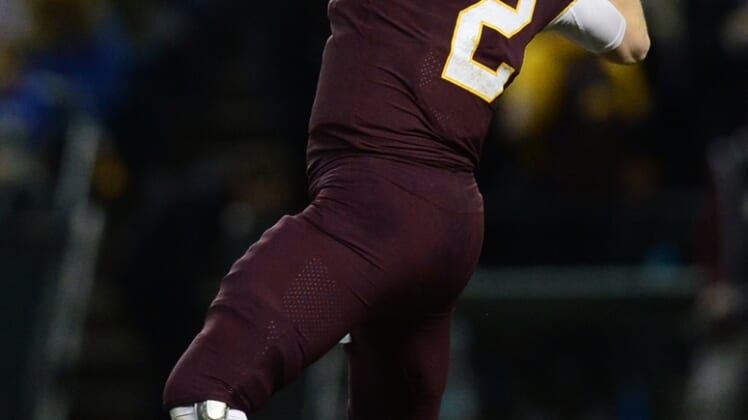 Ky Thomas and Mar’Keise Irving each rushed for more than 100 yards Tuesday night and Minnesota’s defense stifled West Virginia throughout an 18-6 win at the Guaranteed Rate Bowl in Phoenix.

The Golden Gophers (9-4) were superior across both lines of scrimmage and flaunted their physical strength against the shorthanded Mountaineers (6-7). West Virginia played without leading rusher Leddie Brown, who opted out of the bowl game to prepare for the NFL draft, and was outrushed 249-66.

Thomas finished with 144 yards and a touchdown on 21 carries, while Irving chipped in 129 yards on 19 attempts. Quarterback Tanner Morgan didn’t have to throw much, completing 8 of 13 passes for 109 yards with an interception.

Jarret Doege tried to carry the Mountaineers’ offense, but he was under the gun all game long. He hit 18 of 31 attempts for 140 yards with an interception and was sacked five times.

The only points in the second half came on a 49-yard field goal by Minnesota’s Matthew Trickett with 5:53 left in the third quarter. The Gophers reached the 3-yard line with 2:19 remaining in the game but opted to take knees and gave the ball back with four seconds on the clock.

Minnesota initiated scoring just 41 seconds into the second quarter by giving the ball to a guy who normally blocks for touchdowns. Offensive tackle Daniel Faalele, who is 6-foot-9 and 380 pounds, plowed 2 yards up the middle for the score.

The Gophers’ subsequent 2-point conversion left West Virginia in chase mode thereafter. While the Mountaineers responded with Doege’s 1-yard run on fourth-and-goal with 8:48 left in the half, their two-point try failed.

Minnesota upped the margin to 15-6 with 2:14 remaining as Thomas capped a 61-yard drive with a 5-yard run. His 50-yard jaunt two plays prior to the touchdown set the Gophers up at the West Virginia 9.

The Mountaineers’ bid to add at least a field goal before the half died when Doege’s pass under duress was picked off by Michael Dixon at the Minnesota 16 with 36 seconds on the clock.